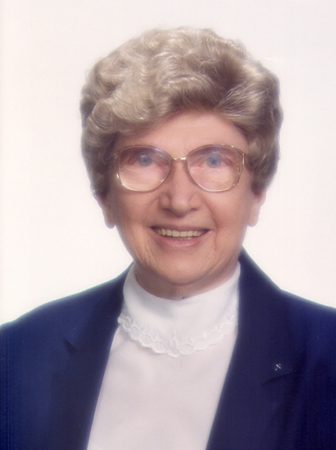 In a biographical reflection written in the 1980’s she wrote, “My Dominican vocation helped me to realize my search for God through praise, worship, and helping to spread the gospel of Jesus. I loved every minute of my teaching days. I have found more happiness in religious life than I ever expected. It prompts me to say: All this, and heaven, too.”

Sister Mary Ambrose’s attitude toward life was always positive and she was ever prayerful.

Her life began in Chicago on September 8, 1915, the feast of Our Lady’s Nativity. She was the third child of Paul and Josephine (Pekarchik) Morang’s five children, three girls and two boys. At her baptism at St. Michael Archangel Church in Chicago, she was again identified with a feast of Our Lady on September 12, 1915. At her baptism she received the name of Marie Anne. Marie Anne was blessed to be born to wonderful Slovak, Christian parents who had come from what was then Austria-Hungary. At the age of eight she received the sacraments of Penance, Holy Eucharist, and Confirmation at St. John Cantius Church in Free Soil, MI.

Her education began at St. Michael School in Chicago where she spent one year. Then the family moved to Free Soil where she completed her elementary and secondary education in public schools.
Regarding her vocation, Sister Mary A. wrote, “My desire to imitate the Blessed Virgin and to serve God as a religious seemed to be present as soon as I reached the age of reason. Devotion to the Holy Rosary attracted me to the Dominican Order.” Meeting Marywood Sisters during summer religion programs furthered her interest in the Dominicans. The Sisters whom she met at Free Soil were Sisters Edwin Bozek, Emily Merkiel, Benjamina Biess, Gelasia Grochowalska, and Hilary Pulaski. Of these, Sister Edwin impressed her most, but it was Sister Emmerica Ziegler who gave an influential vocation talk, which left a lasting impression on her.

After Marie Anne graduated from high school, she had to seek employment in a post-depression economy. During the winter she went to live with her sister in Chicago and served as a governess in several places. Her summers were spent in Free Soil. She finally came to the conclusion that the time had come to follow her desire to become a religious, and she would be a Grand Rapids Dominican. It was on August 15, 1937 that Marie Anne joined a large class of postulants at Marywood under Sister Fabian MacDonald’s guidance. On February 16, 1938 she received the habit of St. Dominic and the name of Sister Mary Ambrose of the Love of God. In 1968 Sister asked to use a modified form of her name. With her great devotion to Mary the Mother of God, she wanted to have that part of her name used rather than Ambrose. So she was happy to be addressed as Sister Mary A. On March 11, 1939 she made her First profession of Vows to Mother Euphrasia Sullivan.

Apostolic life for Sister Mary A. began in 1940 and for over forty years she was engaged in Catholic education. These years were almost evenly divided between assignments in Michigan (twenty-two years) and New Mexico (twenty-one years). In the course of the years she had teaching experiences in all the grades, but her preference was for elementary work, especially the middle grades. She was a well-beloved teacher; both parents and students had a high regard for her. The atmosphere in her classroom was always challenging and conducive to a happy learning experience.

Her mission assignments in Michigan were: St. Anne, Alpena; St. Josaphat and St. Rita, Saginaw; St. Francis Cabrini, Allen Park; St. John, Essexville; St. Norbert, Munger; St. Catherine, Ravenna (where she served as administrator); Our Lady of Perpetual Help, Chesaning; and Sacred Heart, Merrill. In New Mexico she taught at Our Lady of Fatima, Albuquerque; Our Lady of Belen, Belen; and at the Nativity of the Blessed Virgin in Alameda.

In 1983 Marywood became Sister’s residence, and she was asked to join Sister Rose William St. Cyr in the health care apostolate. Later, two additional Sisters were assigned to health care. In 1991 and the years following, Sister made herself readily available for many tasks that needed attention.

Sister was a woman with many interests and talents. Among them were reading, music, arts and crafts, painting, sewing, culinary arts, foreign languages, and archaeology. She availed herself of every opportunity for new educational experiences. In 1991 she was the recipient of a fifth certificate for earning one hundred clock hours of continuing education at Emeritus Center. Life, however, was not all “business” for Sister Mary A. She was a gracious person to live with, and had the ability to make life more pleasant for others. Always a conscientious, hard working, thoughtful individual, she was ever eager to be helpful.

In 1970 Sister Mary A. concluded a brief biographical sketch with the following remarks: “I have found great pleasure in bringing the Good News of Salvation to my pupils and also to CCD groups. I enjoy teaching and being with the young people, whom I hope to lead to the Master Teacher. I pray that I may dwell in the House of the Lord forever.” In 1988 at the time of her Golden Jubilee, she summed up her great happiness in religious life with the words of her religious patron saint, St. Ambrose, `Te Deum laudamus’ – “I praise you, my God.”

May Sister Mary A. continue her Te Deum in heaven midst much joy and jubilation. ALLELUIA!

Sister Mary A. is survived by her sister Stephanie, Mrs. Leonard Sielski of Manistee; nieces, nephews, many friends and a loving Community.

Entered eternal life on February 3, 2012 at the age of 96 after 73 years of religious life

Sister Mary A. visiting the Petrified Forest in New Mexico in 1960

Sister Josita Wilson on the left with Sister Mary A. visiting the Aztec ruins in New Mexico in 1971