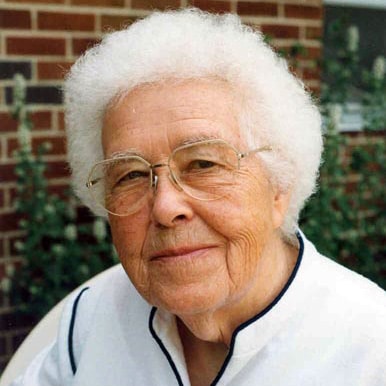 “I have called you by name, you are mine.”

This was a favorite Scriptural quotation of one whom her parents called Mary Philomena, and to whom Mother Eveline Mackey later gave the name of Sister Mary Roch. Disliking the phonetic connotations of the saint’s name, Mary dropped it after some 40 years.

Mary Philomena Alvesteffer was born in 1915 on a little farm in Fern Township, Mason County, Michigan to parents who both came from large families. They were without a parish church and Sunday Masses were rare — only when a traveling Franciscan father visited. On other Sundays, Mary and her older brother, George, were given Coffin’s Devout Instructions to ponder. After that they turned to their preferred illustrations in the Sear’s Catalog. From her self-educated mother, Mary became interested in reading at an early age.

In 1920 financial difficulties forced her parents to sell the farm and move to Ludington. There the children (six of them in time) could get a Catholic education at St. Simon’s school. Life during the depression years was hard, but economic and social challenges bound the family together. Their entertainment was reading books from the public library. When old enough, Mary worked after school and during the summer to help pay book bills. She loved to visit her grandmother in Weare, especially when the visit coincided with that of her aunt, Sister Frances Clare.

When Mary considered joining the Sisters of Mercy, her family insisted that she wait until she was 16. At that age she started a novena for “I do not know what.” At the close, she received a letter from Sister Jerome Smithers that led her to enter the Marywood aspirancy. She received the habit in 1934. She made her First Profession of Vows on August 24, 1936 and her Final Profession on August 23, 1939, both to Mother Euphrasia Sullivan. Mary was graduated in 1936 from Catholic Junior College.

Sister Roch’s first assignment was to grades 3 and 4 at Beal City, but after three weeks she was reassigned to Holy Rosary Academy. She later taught grade school at St. Joseph, West Branch; St. Mary, Lake Leelanau; and Visitation, North Dorr. “Those early years of teaching and mission life were day-by-day and year-to-year experiences of joy and sorrow, hope and awakening, weakness and strength.” By choice of the community she became a science teacher. “Educationally, I swept the streets and the El of Chicago earning a coveted B.A. from DePaul in 1954. I capped this with an M.S. in biology 1962 by doing research on the parathyroids of rana pipiens in the course of which a couple thousand (more or less) green creatures from Oshkosh, Wisconsin became my personal concerns. I learned a lot of respect for scientific advancement and became a better teacher. The wonder of life on all levels saturated my mind and soul, and gave a new meaning to my spiritual life.” She taught high school at Ss. Peter & Paul, Saginaw; St. Michael, Maple Grove; St. Mary, Gaylord; and St. Mary Cathedral School, Saginaw.

For reasons of health, Sister Mary went to West Branch for three years of home-making and healing outreach. This second career was interrupted by a call to serve as administrator of Aquinata Hall (1977-80). “I learned a lot watching the fruit mellow and mature for the final harvest.” She also spent many hours on a ladder repainting walls.

Then a dream was fulfilled when Sister Marie Eugene Charbonneau invited Mary to share living and service on Beaver Island. She helped the new lay principal learn the ropes and assisted in the work of the parish at a time when it was going through a crisis. Eventually a painful decision was made: To bring to closure 93 years of Dominican life and service on Beaver Island. “On July 15, 1991, we said goodbye to these faithful friends of the community. The Beaver Islander blew its whistle for us the last time, and we watched the Island fade from sight.”

After that Mary lived with three other Sisters in Apartment 301 of the renovated West Wing of Marywood. There she had leisure to indulge in her desire for quiet and time to enjoy the Lord, especially in his Word. Her assignment was that of Congregational Vita Collector, for which she was “volunteered” by the late Sister Letitia. “Strange and ironic, it plunged me back a half-century, when the natural bent for writing, which I felt sure I had, was relegated in favor of becoming a science teacher.” In 1997 ill health necessitated her relinquishing vita writing and moving to Aquinata Hall.

Those who have lived with Sister Mary have found her presence a joy. She was prayerful, generous, kind, and had a great sense of humor and a special gift with the sick and dying. Her hobbies and interests were cooking, herb gardens, needlework, and reading with a preference for —what else?—biographies.