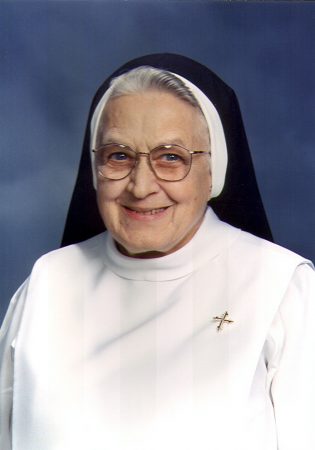 On a farm near Sand Lake, Michigan on August 11, 1914 William and Albina Sagorski celebrated the birth of their seventh child, who would become Sister Mary Albert. Five daughters and one son preceded this daughter; one more daughter would follow. On September 13th the child was baptized at St. Mary’s Church, Sand Lake and was given the name Seraphine.

Since Sand Lake did not have a Catholic School, the Sagorski children attended the Johnson County Public School for their elementary education. Their religious education and preparation for the sacraments came from their parents and the pastor, who held classes for the children and their parents on Sunday evenings. Although Seraphine’s high school years were in the public school, she felt drawn to give herself to a contemplative life and focus on God alone. In 1931, when she was sixteen years old, Sisters Jerome and Florentine arrived at Sand Lake to talk to the young women of the parish about the Marywood Aspirancy. Her younger sister Louise entered the Aspirancy in June of that year. Seraphine needed a bit more time, but by August was ready to join her sister and begin her life at Marywood.

After her canonical novitiate year, Sister Mary Albert responded to the request for volunteers to teach in New Mexico. First she studied at the university there to receive her teaching certificate. At the same time, she prepared for final profession, which she made in 1937. Sister Mary Albert loved the Southwest. She described the children as delightful and a pleasure to teach, and she was moved by the beauty of the Manzano Mountains, the sunshine and blue skies.

In her twelve years at Belen, New Mexico, Sister Mary Albert taught grades pre-school through eighth grade. After school she and the other Sisters taught catechism at the missions of Jarales, Pueblitos and Los Chavez. On Saturday they taught catechism classes for the Belen Public School students. On Sundays, after the High Mass, young adults came for instruction in religion. Vocations to the Servite Priesthood and to the Grand Rapids Dominican Sisters were blessings which flowed from these apostolic efforts. Two great joys for Sister Mary Albert were the preparation of over one hundred children for their First Communion and the training of altar servers.

After those happy years of teaching the children in New Mexico, Sister returned to Michigan and taught at St. Joseph, Weare (Hart) and St. Joseph, Grand Rapids. She also spent ten summer six-week sessions (in St. Louis, MO) to earn a degree in Home Economics Education. The Marywood Academy students were the first to have Sister for classes in the Home Arts. She also had the responsibility of supervising the dining rooms for both the Aspirants and the boarding students. Sister Mary Albert spent sixteen years on the Marywood Academy faculty after which she was assigned to the following places: Catholic Central, Grand Rapids; St. Michael, Maple Grove; St. Francis, Traverse City; St. Mary, Muskegon; Holy Rosary Academy, Bay City. At these places she taught both grade and high school.

Sister Mary Albert’s training in the Home Arts was put to good use at SS Peter and Paul, Saginaw; Holy Trinity, Alpine; Aquinata Hall and Marywood. In all she did Sister was conscientious, meticulous, and gracious. At Marywood and the House of Studies, Sister was also frequently part-time chauffeur, which she considered both a privilege and a service to the Sisters. From 1975-1985 Sister Mary Albert resided at the House of Studies after which Marywood became her home where she enjoyed volunteering in both local and out-reach ministries including visiting the elderly and infirm.

An added and unexpected joy came about as the result of a generous benefactor who made it possible for Sisters Mary Albert and Rose Seraphine to make pilgrimages to Fatima, Lourdes and Rome. All of her days, wherever she was, Sister Mary Albert relished nature and the seasonal changes; listening to music; reading, walking and being outdoors.

In a reflective piece, Sister Mary Albert wrote: “The Dominican vocation may be summed up as a vocation identified with study, prayer and giving to others the fruits of these. Both prayer and study together with shared community living have meant so much to me over the years…it is an abiding and living return of His call, the precious gifts He daily gives, the fullness of which we await in heaven.” And then she made this request, “Pray for me and forgive what has been deficient in the Great Commandment of Love on my part to you all, my Sisters. Hearkening back to the time of her Diamond Jubilee and its reference to a time for everything, Sister Mary Albert was more than ready to embrace the reality of another favorite Scripture passage: “eye has not seen, ear has not heard, nor has it so much as dawned on us what God has prepared for those who love Him.” (Cor: 2:9). We rejoice with Sister Mary Albert that the fullness of life is now hers for all eternity. May she rest in peace and love.

Sister is survived by her sister, Sister Rose Seraphine, nieces, nephews; grand nieces and nephews; many friends and members of her Dominican Community.

We commend Sister Mary Albert to your prayers.