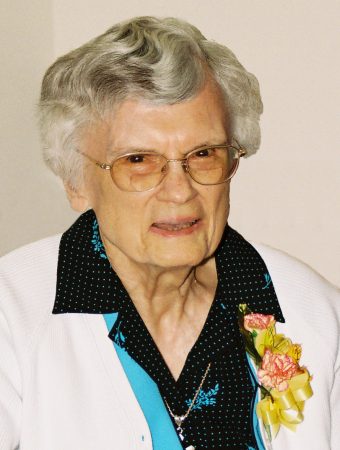 In these words Sister Marjorie Vangsness summed up the conviction that motivated and energized her through many years of ministry and leadership.

Born in Sagola, in Michigan’s Upper Peninsula, of Norwegian and French-Canadian parentage, she lost her mother soon after the birth of her brothers, Norbert and Orland. Marjorie spent her childhood in the family of her grandmother with uncles and aunts who were like older brothers and sisters. When she was about to enter the eighth grade, her grandmother sold the farm and moved to Marinette, Wisconsin. Marjorie finished school there at St. Joseph’s under the Grand Rapids Dominicans and entered the convent at Marywood in the fall of 1933.

At reception Marjorie took the religious name of Norbert, which she kept until 1976. She began her college studies at Catholic Junior College (forerunner of Aquinas College) and received her BA from Central Michigan University in 1948. In the summer of 1955 she went to France on a Fulbright scholarship. For her graduate work in French she attended Laval University in Quebec, receiving her MA summa cum laude in 1959 and her PhD in 1963. Between times she taught mathematics, Latin and French in high schools in Merrill, Essexville, Gaylord, Muskegon, and Grand Rapids; and later taught French at Aquinas College until her election as Prioress of the congregation in 1972.

With boundless energy she taught classes at Aquinas College, chaired the department of foreign languages and served on the congregation’s General Council all while serving as the house superior of the Aquinas College Convent — and completing her doctoral dissertation. As each new challenge arose, she set her jaw, smiled, and went to work. When renewal of religious life was in its early stages, she broke through the prevailing mode of private spirituality by initiating dialogue among the Sisters who were brought together to discuss Cardinal Suenens’ book The Nun in the Modern World.

During Sister Marjorie’s two terms as Prioress (1972-1980), the congregation was deep into incorporating the Vatican II documents and learning the meaning of the work of collegiality and subsidiarity as religious life emerged into the modern world. It was the time of commissions and committees and task forces on governance, apostolic placement, pre-retirement and retirement, new policies on housing, and new election procedures for Chapter delegates and central government. A major undertaking in her first term was to negotiate the inclusion of the Congregation into the Social Security system which became legally possible in 1972. Through it all, she kept the Sisters supplied with articles to read and reports of national meetings on religious life in the new era.

In 1980, after her second term as Prioress, Sister Marjorie spent a year’s sabbatical at the University of Notre Dame, where she freely enjoyed participating in seminars as well as cultural and recreational activities. She enjoyed auditing the college courses and declared that this time was — “just what the doctor ordered.” Then her search for work in justice and peace resulted in a position with NETWORK, the Catholic social justice lobby in Washington, D.C., as financial and development director. She enjoyed the political, cultural, and spiritual opportunities the nation’s capital offered, as well as the challenging work. Then, as NETWORK expanded, her duties multiplied at the same time that her energies began to decrease. After consultation with counsellors and spiritual directors, she reached a decision to resign.

During a retreat she was listening to music, including Mozart’s “Clarinet Concerto in A Major.” “The music came through to me strongly as though Jesus were serenading me . . . drawing me to respond lovingly to him.” The next morning, “I had a sense that Jesus was asking gently, “Where have you been?'” That experience led her to re-evaluate her activism and give more time to praying with the heart.

After exploring opportunities for part-time ministry with the elderly, Sister Marjorie accepted a position in 1986 in St. Anthony parish in Washington D.C., supervising home visitors and keeping up a telephone ministry to the home-bound. In July 1992, she returned to Grand Rapids and a similar ministry at Sacred Heart parish. She continued to participate in cultural and religious activities, to take classes at Aquinas Emeritus College, and to relax with reading and card-playing.

In 2012, Sister Marjorie received an honorary Doctorate of Divinity from Aquinas College in recognition of her life of study and service. As noted in the conferral ceremony at the time, Sister Marjorie “is a strong advocate for peace and justice, a keen student of theology and a vibrant example of Dominican life.”

Looking forward, Sister Marjorie wrote: “One of the things I want to do in the next world is to dance like Mikhail Baryshnikov — with great leaps from hill to hill and from mountain to mountain.” Surely now this vision and the longing cry of the clarinet have found fulfillment.

Sister Marjorie is survived by her sister-in-law Carmen Vangsness of Longmeadow, MA; nieces; nephews; cousins; many friends and members of her Dominican Community.

We commend Sister Marjorie to your prayers.