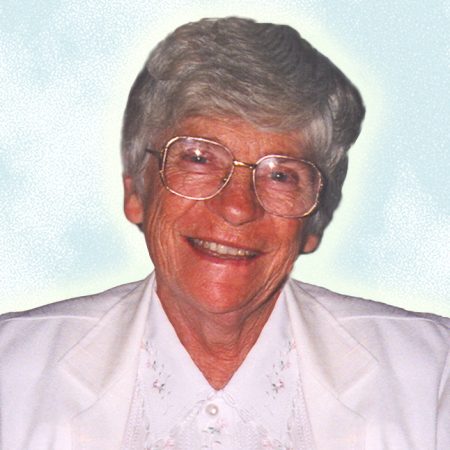 “My feet are indeed planted on the mountain and I want to be a bearer of the ‘good news’...” wrote Sr. Marjorie as she reflected on her years in religious life.

This she did through teaching elementary school, religious education, pastoral ministry and serving as ward clerk and chauffeur at Aquinata Hall.

One of nine surviving children of Ray and Anna Jordan Kendall, Joyce was born in Flint, Michigan on September 11, 1930. (Her twin died in pre-birth.) Later the family moved to East Tawas.

Early responsibility was the norm for large families at that time. At the age of eight, she was responsible for renting a rowboat at a resort during the summer. She recalled, “From the time I was knee-high I worked in my father’s general store. Beginning with stocking shelves, sweeping and dusting, I was eventually promoted to sales, pricing, and finally meat cutter.” Her earnings helped pay for books and school clothes.

Joyce’s education began at St. Joseph, East Tawas, where she met the Grand Rapids Dominicans in person and through Sister Estelle’s Marywood Readers. She began high school at Tawas Area High and after two years finished as a boarder at Marywood Academy. There she learned to love Dominican life, and as she said, “just stayed on.”

Joyce entered as a postulant September 8, 1948. At reception, she took the name Marjorie Ann after a younger sister who had died. In the 1950’s and 60’s she taught early elementary grades in schools in Michigan and New Mexico. She received a B.A. degree from Aquinas College in 1963 and an M.A. in Special Education from the University of New Mexico on a government grant program, 1971-1972. She also took scripture classes from Fr. James Wolfe in New Mexico. In fact, the study and contemplation of scripture became increasingly important to Sister Marjorie in her later years.

An important influence in her life was involvement in the Charismatic Renewal beginning in 1967. As her interest in evangelization increased in the 1960’s and 70’s, she pursued theological scripture studies through various summer institutes.

Sister Marjorie Ann continued her teaching ministry until 1983. At that time, she was assigned to Aquinata Hall as ward clerk and driver. After three years there, she returned to the Tawas/East Tawas area in ministry to the poor and senior population there.

Her friends remember her as a gentle, wise and persistent person. Her persuasive ways extended even to animals and wildlife. She was known as something of a “dog whisperer” as she was able to calm the anxious pet and enjoyed walking dogs when the opportunity arose.

As Sister Marjorie’s health and memory deteriorated, her spirit grew in depth, understanding and gracious acceptance. Now her feet have climbed the last mountain and she has the vision surpassing all. We are grateful for her presence in our lives and confident of her joy in the Risen Lord.

We commend Sister Marjorie Ann to your prayers.