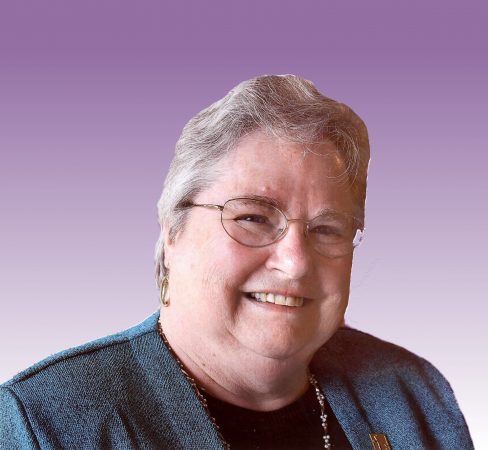 As clay is in the potter's hands, so are you in mine.

This quotation from Jeremiah was a favorite of Sister Marita MacNall, who was open and responsive to the needs of many ministries, always and ever willing to be shaped and reshaped in God’s loving hands.

On November 27, 1941 Kathleen was born in Alpena, Michigan, the only daughter of Donald and Eleanor MacNall. She had three brothers: Donald, Robert who died July 31, 2015 and Larry. Kathleen attended St. Bernard School and Alpena Catholic Central High School from which she graduated in 1959. She was active in the Sodality there and served as school librarian. As a student she also did secretarial jobs for the parish.

In September 1959, Kathleen entered the Grand Rapids Dominican Congregation. When she received the habit on May 30, 1960, she took the name and title of Sister Marita of Our Lady of the Snows. Her first profession of vows was one year later on June 1, 1961.

Sister Marita’s first ministry was education. She taught fifth and sixth grades at both St. Mary, Hannah and St. Mary, in St. Charles; she taught seventh and eighth grades at Sacred Heart, Muskegon Heights; she also taught at St. Joseph, East Tawas; and Immaculate Heart of Mary and St. Anthony, Grand Rapids. She shared her love of reading with her students and encouraged them to develop their own “voice” in writing, often inviting them to enter writing contests.

Sister Marita’s education included a BA from Aquinas College in 1966; an MA as a reading specialist from Cardinal Stritch College in Milwaukee in 1975; and an MA in pastoral ministry from Marygrove College in 1986.

After her years in elementary and junior high education, Sister Marita began a new ministry in parish life. In 1982 she went to St. Mary in Mio where she served in pastoral ministry and in 1988 moved to St. Mary Parish, Grayling where she served as Pastoral Minister and Director of Religious Education.

In 1990 Sister Marita moved into another new form of service, working in the Radiology Department at Mercy Hospital, Grayling as a unit assistant, radiology assistant and clerk from 1990 to 2006. This health care ministry also allowed her to use her many pastoral gifts in accompanying people who were facing the worry and challenge of illness. In 2007 she had a sabbatical year after which she returned to Grayling to assist with administrative duties of parish life and to support many who were in need. She also served as a volunteer clerk for the Crawford County Library.

Another great love of Sister Marita’s was the prayer shawl ministry which she initiated along with a small group of women in Grayling. At no cost to the recipients, these beautiful hand knit shawls are sent to people all over the world who need to know that they are not alone in their times of trial, and that they are indeed wrapped in God’s loving embrace no matter how difficult the situation. For soldiers and small babies for whom a full shawl was not a practical item, she knit small squares – each knot a prayer of love and kindness for the recipient. In this way she touched and encouraged others in the Grayling area and beyond in times of great difficulty in their lives.

It was a comfort to Sister Marita to know that the prayer shawl ministry will continue through the good people of St. Mary’s in Grayling who continue to meet the third Tuesday of the month to knit shawls and send them to men, women and children in need of support and prayers.

Sister Marita continued to serve the people in Grayling at St. Mary’s Parish and the wider community until illness necessitated her move to Grand Rapids in the late summer of 2015.

Throughout her life, Sister Marita felt support from many people and in turn offered support and encouragement to others.

Sister Marita is survived by her brothers Donald (Blanche) MacNall of Alpena and Larry Kaiser of Greenfield, WI; and her sister-in-law Audrey MacNall of Alpena, nieces and nephews, many friends and loving members of her community.

We commend Sister Marita to your prayers

Sister Marita at work as a clerk