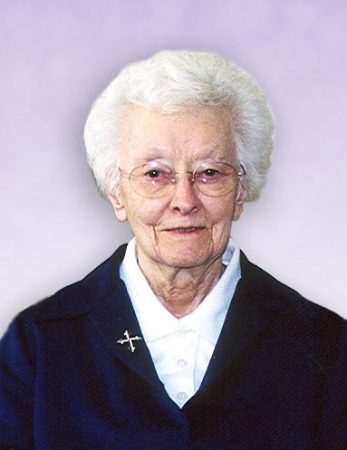 Sister Marie Therese had a great zest for life. Like St. Paul: “I am content . . .no matter what!”

Sister Marie Therese’s earliest autobiographical sketch not only highlights her life prior to her entrance in 1933, but also gives testimony to the literature of rural Middle America struggling to survive the Great Depression.

The sixth of ten children of Albert and Adeline Piche Rouse, Mary Theresa was born February 11, 1913. She grew up on the family farm about two miles outside Nadeau, a mining town in the Upper Peninsula. The country school she attended throughout her elementary years was much like the scene of her first teaching position. High school at Nadeau and Stephenson High taught her what it meant to be responsible. She and her sister Gertrude worked their way through school. The special bond between Mary and Gertrude was changed when Gertrude died very unexpectedly. Life changed for Mary Theresa. Tracy, as she was affectionately called by her family and friends, definitely felt the loss. She later spoke of this event as “one of the hardest happenings of my life.” With determination, she finished high school, and upon graduation enrolled in Menominee County Normal to earn a State Limited Certificate. The summer search for a teaching job ended late in August. She was hired to teach in a one-room eight-grade school with an enrollment of 30 in LaBranch, Michigan. Every day she stoked the furnace, cleaned the school, and all for $85.00 a month. Tracy the teacher began her career and continued to share her gifts with her students, family and friends.

Teaching was her greatest gift, but another desire was longing within. Tracy was introduced to the Dominican Sisters serving in Marinette, Wisconsin. Her life took on a new challenge . . . God had something in mind for Tracy. She prepared to leave her family when her father died suddenly. Tracy felt she should remain at home. However, her mother, a woman of great faith and love, encouraged her to continue with her plan and not delay – after all, this was what she wanted and she had her family’s blessing. She left for Grand Rapids, traveling across the lake, her first time away from home. In September of 1933 she joined the postulant class that fast was labeled the “lovely girls.” She came highly recommended by her pastor as a “fit person.” Her certification allowed her to enter the classroom for her first assignment at St. Joseph School, Bay City. Her career as a teacher began with success.

Mary Theresa received the Dominican habit on August 21, 1934 and was given the name Sister Marie Therese of the Child Jesus by Mother Eveline Mackey. Two years later, Mother Euphrasia Sullivan accepted her first vows on August 24, 1936. Three years of community living and teaching at St. Mary School, Hannah, confirmed her desire to take her final vows on August 24, 1939.

Recognized from her earliest years as a promising and very successful teacher of the upper grade levels at St. Joseph, Saginaw and Our Lady of Perpetual Help, Chesaning, she served as principal and superior at schools that were growing in enrollment. She served at St. Mary Magdalen, Melvindale; St. Francis, Traverse City; St. Stephen, Grand Rapids; and Our Lady of Grace, Dearborn. Successful and tireless in meeting the demands of administration, she felt called to teaching in a new ministry, that of pastoral care, ministry to the elderly.

As pioneers in a diocesan effort named PROJECT SEEK, Sister Marie Therese and her companion from teaching days, Sister Jane Frances Flannery, began a ministry that would make them familiar visitors in the Muskegon area’s four inner city parishes. PROJECT SEEK was just the beginning, going door to door, making telephone calls, and offering assistance to the elderly and homebound in every need . . . a trip to the doctor, a funeral, a fire, etc. “Every day is a celebration of God’s love for the elderly,” she affirmed, as she gave voice to her greatest love. Her ministry fit and she celebrated it. Aging was also her gift. She knew how important healthy aging was and she willingly shared it.

PROJECT SEEK was a success and Sisters Marie Therese and Jane Frances continued their journey in a new location, St. Patrick Parish, Portland. They visited the parishioners from one end of the Grand River to the other. After Sister Jane Frances retired, Sister Marie Therese remained and developed the Ministry of Caring, inviting members of the parish to participate and share with her in meeting the needs of the elderly.

In 1992 St. Patrick, Parnell became her new ministry center. She joined Sister Bonita Janiszewski, SSJ in service to a growing parish family. Again, she visited the entire parish. When poor eyesight became a challenge, she found a different way to minister – the telephone. She enjoyed her extra time, reading, doing puzzles, crafts and gifts.

The time to move to a new stage of aging came in April 1999. Sister Marie Therese was diagnosed with Myasthenia Gravis, a disease that affects the nerves and muscles. She moved to Marywood and continued to minister to family, community and friends. The disease definitely slowed her down, but she enjoyed every day as God’s gift to her. She always knew when to rest and when to celebrate. She truly embraced her gospel gifts of loving, hoping and faith.

Throughout her life she gave witness. She accepted every challenge, every difficulty, every opportunity as a gift and she never let anything get in the way of sharing her “gift” – the life given her by her parents and her Dominican Community.

We commend Sister Marie Therese to your prayers.