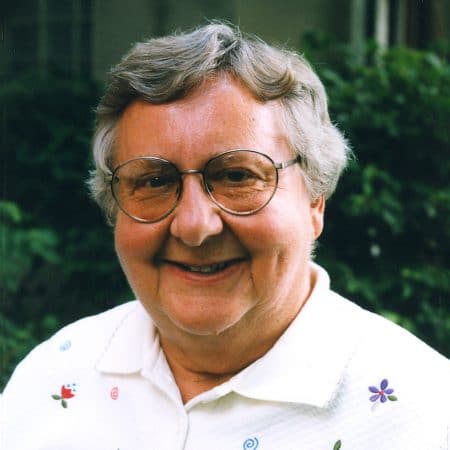 “There is an appointed time for everything…” Ecclesiasties 33:1-8

In the life of Sister Marie Jude Wysocki “everything” included many experiences centered around a ministry of teaching.

The youngest child of John and Blanche (Grochowalski) Wysocki was born July 12, 1931. Little Phyllis never liked being reminded that she was the baby of the family; but this position did seem to make her even dearer to her parents and siblings. Phyllis’ father, John, was born in the Russian section of Poland. Like many in his day he came to America to have a better life, which began with his marriage to Blanche. Six children were born to this couple although two died in infancy due to the diphtheria epidemic that killed thousands of children just after World War I. The family was loving, gracious and hospitable. In spite of the struggle of first generation immigration and the death of two infants, or maybe because of it, the family treasured good times together. In her own recollection of her childhood, Phyllis said that she was well cared for by her doting sisters and loving parents. She liked pretty clothes, dolls, parties and animals, especially dogs.

Phyllis attended grade school at St. Isidore’s and graduated from Catholic Central High School in June 1949, where she met the Grand Rapids Dominicans. Although she had heard the call to a religious vocation, she claimed to be having too much fun to join a convent. That would change after witnessing the reception and later the profession ceremony of Sister Thaddeus Kowalinski. Phyllis entered the Congregation in September 1949, receiving the name Sister Marie Jude of the Blessed Sacrament at her reception.

Beginning in 1951 Sister Marie Jude taught in elementary schools: St. Rita, Saginaw; St. Alphonsus, Grand Rapids; St. Francis, Traverse City; St. Mary, New Salem; St. Norbert, Munger. Then for four years she was stationed at Marywood as a high school teacher and directress of aspirants. For one year she was also directress of boarders and in the last year, grade school principal. In 1976 she went to Holy Cross in Santa Cruz, New Mexico teaching grade 6 for three years and serving as principal for three more. She returned to Grand Rapids and taught at Immaculate Heart of Mary and St. Thomas schools. Then for one year she was principal of Marywood Academy. In 1989 she moved to St. Mary, Spring Lake where she would reside with her good friends and her beloved Schnauzers until her retirement to Marywood 20 years later.

The academic background for these positions included a B.A. in history and German and an M.A. in religious education from Aquinas College. She also earned an M.A. in elementary administration from Central Michigan University.

Sister Marie Jude loved teaching and her students loved her. She inspired them to share her love of reading. She said, “I have taught grades 2 through 10 and my favorite grades are 6th- 7th -8th. . . . I sincerely believe good Catholic teaching to youngsters in elementary school is a very important part of the work of the Church. I have no desire to do any other type of work but teaching.” As principal she maintained an open-door policy and welcomed colleagues for conversation and coffee. After retiring from full-time ministry she remained in the school environment as a volunteer at St. Mary’s in Spring Lake.

In the spring of 2009 the three Sisters at Spring Lake said goodbye to their beloved community there and moved to Marywood and the Marywood Health Center.

Witty and fun-loving, Marie Jude added zest to community living wherever she was, even in her room at the Marywood Health Center where she opened Jude’s Joint to the delight of her guests who could always find refreshments as well as good conversations. Her interests were many: reading, stamp collecting, latch hooking, music, fishing and crossword puzzles. She will be remembered as one who loved life and put her whole heart and soul into whatever she did.

Sister Marie Jude lived life to the full, savoring every minute, enduring radiation treatments and hospitalizations until the end time was evident, and then she graciously accepted and embraced the time to say goodbye. She will be greatly missed.

We commend Sister Marie Jude to your prayers.

Sister Marie Jude on the grounds of Marywood in 1950