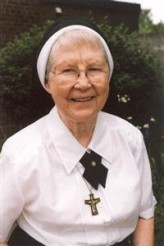 If this passage meant so much to her during life, she now has the full realization of the magnitude of God’s continual providential intervention all the days of her dedicated Dominican life.

In Bay City on September 20, 1913 was the first manifestation of God’s goodness in her life when Elegia Agnes became the second of Stanley and Agnes Kurlinski Timm’s nine children of five boys and four girls. The day following her birth she was baptized at St. Stanislaus Kostka Parish in Bay City. In 1923 she received the Sacrament of Confirmation from Bishop Edward D. Kelly.

Elegia had a happy family life, and she enjoyed helping her mother in caring for her younger brothers and sisters, and picking fruit and vegetables with her father in the garden. Not only was she enveloped in the love of her dear mother and father and her sisters and brothers, but her maternal grandparents also lived at their home. In her autobiography, Sister Marie Elegia has this lovely description of her home life: “By the word and example of my parents I learned to love God and honor Mary, the Holy Mother of God. In baptism, they said, “You became a child of God. Share God’s presence. Greet us whenever you come home with a joyful: Praised by Jesus Christ. We will respond: Forever and ever. Amen.’ This prayerful ritual was kept up by all of us.”

From her parents, who were great readers, she learned the value of books. It was no surprise that when she became a student at St. Stanislaus School, where she was taught by the Felician Sisters, that she loved to study. In high school she was very active both in school and parish community life helping to stage plays, singing in the choir, making home visits for the parish priests, and being President of Our Lady’s Sodality.

In June 1931, she graduated from St. Stanislaus High School. Thanks to the kind guidance of her good friend and pastor, Father L. P. Krakowski, a year after graduation she resolved to do something about her call to religious life. This call had been nurtured during her school years. Her parents and grandparents were very interested in her report cards and paid attention to her grades, conduct, and application. Her mother would say to her. “If you are very good, Jesus might call you for His special
service.” Where to enter? Her pastor encouraged her to become acquainted with the Grand Rapids Dominicans as he thought her health would be better in Grand Rapids than in Detroit with the Felician Sisters.

It was on September 7, 1932, that she came to Grand Rapids to become a Dominican. Here she had Sister Jerome Smithers for her novitiate training. On August 22, 1933, she received the Holy Habit of St. Dominic and the name of Sister Marie Elegia of Our Blessed Lady. Her First Profession of Vows was made to Mother Eveline Mackey on August 23, 1935. Sister Marie Elegia made her Final Profession to Mother Euphrasia Sullivan on August 23, 1938.

After her religious Profession, Sister Marie Elegia began her almost-fifty years devoted to Catholic education. In her earlier years she taught the primary grades. What a marvelous primary teacher she was! Later, she taught the intermediate grades, junior high, and high school.

Her apostolic labors took her to the following missions: St. Josephat, St. Casimir, and St. Joseph, Saginaw; Gaylord (three time intervals); West Branch; Merrill; Chesaning; Beaver Island; Lake Leelanau; Essexville; Maple Grove; Sacred Heart, Muskegon Heights; St. Alphonsus and Catholic Central, Grand Rapids. Her longest time in one place was at Catholic Central, Grand Rapids, where she spent seventeen years. Here she was a familiar figure teaching English and then as librarian, where she found pleasure teaching library usage and sharing the Word of God. Sister always went about her work with a quiet, ladylike, and gracious manner and wherever she worked, she ever endeavored to be of service to both the faculty and students.

When Sister Marie Elegia’s teaching years ended in 1983, she made Marywood her residence. She also spent much time in Bay City taking wonderful care of the sick members of her family. When she was at Marywood, she was always a most gracious companion to Sisters for doctor appointments. Her great love for the Liturgy prompted her to be very active in the Marywood Chapel as lector and choir member. After Aquinata became her residence she faithfully brought water for the plants and cheer for the employees of the East Wing.

Sister enjoyed reading, arts and crafts, sports, travel, and classical music. When Aquinata became her residence, she enjoyed the slower pace, though to observe her it would seem “that she always had miles to go.” She appreciated having more time to praise God and to pray for peace in the world. She was very grateful that the Community permitted her to spend considerable time with her family, many of whom were ill. She was especially interested in her sister Delphine, who became Sister Dulcis in the Felician Community and who had spent several years as a missionary in Brazil.

Sister Marie Elegia was ever a loyal Dominican and very appreciative of her religious vocation. She remarked, “I have found in the convent a good way to strive for the ideal that was mine since my First Holy Communion.” She expressed her gratitude of her awareness that she was serving God with so many beautiful women. On the first Sunday of June 2003, Sister Marie Elegia celebrated her 70th jubilee with all the Sisters at Aquinata and her loving family and friends. It was a joyous time of gratitude to God for the many gifts of a long lifetime of service.

May the words from Ephesians, which she prayed frequently and fervently, “Praised be the God and Father of our Lord Jesus Christ” (1:3), continue to be her prayer now that heaven is her new home. We are grateful to Sister Marie Elegia for having enriched the life of the Church and our Dominican Community. May she now enjoy God’s everlasting peace, joy, and beauty and continue to sing God’s praises for all eternity. ALLELUIA!

Sister Marie Elegia is survived by her brothers and sisters who live in Bay City: Daniel (Rita); Lorraine McDonough; and Virginia Timm; and her brothers, Richard (Christina) of Grand Rapids, and Raymond of Bethesda, Maryland; nieces, nephews, many friends and a loving Community.

We commend Sister Marie Elegia to your prayers.