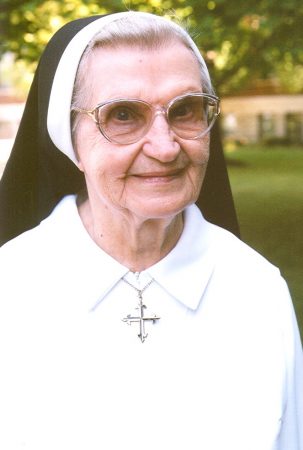 Sister Marie Dominica’s favorite scripture passage was from Ephesians, “Before the world was made, God chose us, chose us in Christ to be holy and spotless and to live through love in God’s presence...”

She was indeed one of God’s chosen ones. May she now live in God’s eternal presence.

It was in Grand Rapids on December 2, 1912 that Sister Marie Dominica was born to Mathias and Petronilla Viesnoraitis, both immigrants from Lithuania. Of her beloved parents she wrote, “My father was a very conscientious and saintly person and my mother self-sacrificing. I am ever thankful to God for giving me such wonderful parents. The greatest thing of all that we received was our Catholic faith at our Baptism as infants.” It was at SS. Peter & Paul Church, Grand Rapids that Sister Marie Dominica was baptized and given the name of Magdalene but she was known as Margaret. The Viesnoraitis’ first child died at birth, but there were two boys and three girls who grew to adulthood.

Since the Viesnoraitis family lived next door to the Sisters, Sister Marie Dominica says they learned to love and respect them. And as a little girl she longed to be one of them. What attracted her was the happiness, peace, and contentment their lives seemed to radiate. At the time she did not realize that this was the wonderful effect of the grace of God. Our Sisters staffed SS. Peter & Paul School at that time and well did she remember each of her teachers. When she finished eighth grade at the age of thirteen, she wanted to enter the Convent. She, however, was too young. Her next two years were spent at Catholic Central, Grand Rapids, where she was again happy to have our Sisters as teachers.

On September 8, 1928 at the age of fifteen, Margaret, and her cousin (Sister Anthony Clare Adomaitis), entered Marywood with Sister Jerome Smithers, OP as Postulant and Novice Mistress. She received the holy habit of St. Dominic and the name Sister Marie Dominica of the Holy Rosary, on August 29, 1929. On September 1, 1931, she made her First Profession of Vows to Mother Eveline Mackey and on September 1, 1937 her Final Profession.

For over fifty years Sister Marie Dominica was to work tirelessly for God’s people in Michigan, Wisconsin, and Peru. For eleven years she taught on the elementary grade level at the following places: Munger; Marinette, Wisconsin; Mt. Pleasant; Merrill; St. Stephen and St. Andrew, Grand Rapids; and North Dorr. In 1941 she came to Marywood and for twenty-one years she was teacher at the Academy in Grades Three and Four. At the same time she was most generous in helping with the “practice” teachers from Aquinas College. Also, she did much catechetical work on Saturdays, and during the summer she did catechetical work in many places that did not have Catholic schools. During this time she was also asked to work on two books, “We Learn about God” and “Christ in the Family,” to be used for the religious correspondence course, a project promoted by Bishop Francis J. Haas and in which our Sisters were involved.

The seeds of a missionary vocation that had been planted and nurtured for many years were to fructify when a call came asked that our Sisters go to Chimbote, Peru. Sister Marie Dominica was one of the first two of our Sisters accepted for this work. Thus, the Fall of 1962 found her in Cuernavaca, Mexico preparing for her new ministry.

She spent nineteen very dedicated years as a missionary in Chimbote working with the very poor and underprivileged. Sister’s main work was the supervision of primary school teachers in the religion classes, helping with the teachers’ course in Religious Formation, and organizing the preparation of children for First Holy Communion. This meant treks on foot and in Chimbote’s colectivos (taxicabs) over the ever-dusty roads and amidst the city’s unpleasant environment. Important to her, too, was the formation of local community living through prayer, sharing, and togetherness.

In 1981 Sister Marie Dominica returned to Grand Rapids and was able to continue her missionary work in a very effective way as a Mission Awareness Promoter. She availed herself of every possible opportunity to make known the tremendous work being done in Chimbote. Thus, she was able to procure much needed help to continue the missionary work of our Sisters in Chimbote. After retiring from full-time ministry, she worked 10 years at Emmaus Clothing Center and during the renovation of St. Andrew Cathedral at the Westside Apostolate.

Sister was a beautiful person who loved life, her Community, and her family. Her favorite hymn was Landry’s, “Hail Mary, Gentle Woman.” If there was one outstanding quality that Sister Marie Dominica possessed, it was her gentleness. She was always gracious and most conscientious. As a teacher, she was a model: as a lecturer, she was one of the best. She also had her crosses, especially, an eye condition that caused her much suffering and inconvenience. Prayer was very important in her life; her faith in God and her confidence in Our Blessed Mother were deeply rooted.

In her autobiography Sister Marie Dominica expressed her deep gratitude to the Congregation for everything that had been done for her. She also remarked, “Knowing God’s great goodness and love as St. Paul puts it, ‘now we see in a dark manner’, and if that is so wonderful, how glorious must be the Beatific Vision when we shall see God face to face.”

May God now reward Sister Marie Dominica for her long, faithful, and dedicated years of service, and, in particular, for sharing the Gospel with God’s people in need. May she know the beauty of God, live in God’s eternal love, joy, and peace, and see God face to face.

Sister Marie Dominica is survived by her nieces, nephews, many friends and a loving Community.

We commend Sister Marie Dominica to your prayers.