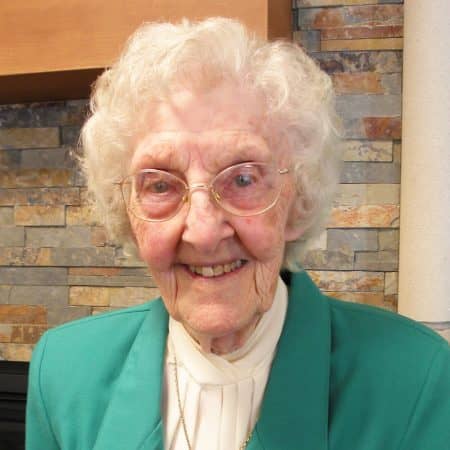 Praise God from whom all blessings flow.

After gratitude for her Dominican vocation, Sister Marie Benedict O’Toole treasured most her long career of teaching small children. Even after her Golden Jubilee, she spent years tutoring youngsters at SS Peter and Paul School in Saginaw and elsewhere, and she loved every minute of it.

Coming into the world on October 11, 1925, Geraldine Ann O’Toole was the seventh of ten children born to Mary and Benedict O’Toole in Merrill, Michigan. She grew up on a farm which celebrated its 100 years of existence in 2000. Coming from a very religious family of six girls and four boys, she had an older sister who became a Franciscan Sister and a brother who was a diocesan priest, both of whom preceded her in death. Sister was always proud of her family and Irish roots.

Geraldine attended Sacred Heart Academy grade school and graduated from high school in Merrill in 1944. Her classmates testify to her love of a good time and to her taking part in many activities: cheerleading, swimming, playing soft ball, dancing, as well as working hard at her studies. After being employed two years at J.C. Penney’s in Saginaw, she entered the congregation at Marywood on September 8, 1946. She was formally received upon the completion of her postulancy and received the name Sister Marie Benedict after her mother and father. Soon, she earned the affectionate nickname of Sr. Benny which fit her gentle disposition.

Continuing her college education after her profession of vows in March 1948, she received her BA and MA degrees from Aquinas College in Grand Rapids and another MA in Education from Western Michigan University in Kalamazoo. Through the years, Sister expanded her educational experience by travels which took her to Europe, and then with her good friend Sister John Anne Paquette across the entire country.

Sisters with whom she lived and worked on the missions speak of her competence and prayerfulness and of her readiness to help everyone who needed assistance. Throughout her life she bore the cross of a severe hearing impairment, but she never let that interfere with her teaching or her dedication to mission. Her Sister companions over the years speak of her cheerfulness and hard work, as well as of her ready cooperation in every project.

In January 2003 Sister Marie Benedict was inducted into the Saginaw Catholic Schools Hall of Fame in honor of her contributions to Catholic Education over the years. At the time she wrote: “My life as a Grand Rapids Dominican has been one of joy, life-giving, and full of challenges. There were times when I felt there were not enough hours in a day to do all that I needed to do. I have enjoyed each mission where I have served, the Sisters I lived with, the children, and the parents I worked with. Lots of changes have taken place in education and in community living throughout the years, but with prayer and the support of each other, we saw that everything worked out for the best.”

“I marvel, as I look back over the past 55 years and view all that has transpired in every aspect of my life. God has seen us through good times and hard times and continues to be with us as we move forward on our journey together, seeking new ministries, creating new ways to evangelize and keeping God ever alive in our lives and hopefully in those we meet each day. I praise and thank God each day for the wonderful life that has been mine. And now, I thank all of you for what you have done for me and for the many blessings I have received. God bless each and everyone!”

Sister Benny’s legacy of joy and happiness is summed up in her favorite song: “You are my sunshine.” She was ours. Now she rests in the peace of God, the one she served with joy all of her days.

Sister Marie Benedict is survived by nieces, nephews, many friends and a loving community.

We commend Sister Marie Benedict to your prayers.

Pray for people with special needs and for the Church

“Each day is a gift and is filled with many ways to enjoy it. I want to thank my loving family, my community, and faithful friends for the support they have given me throughout these 70 years.”

Sister Marie Benedict’s classmates testify to her love of a good time and to her taking part in many activities: cheerleading, swimming, playing soft ball, dancing, as well as working hard at her studies.

Sister Marie Benedict’s Sister companions over the years speak of her cheerfulness and hard work, as well as of her ready cooperation in every project.