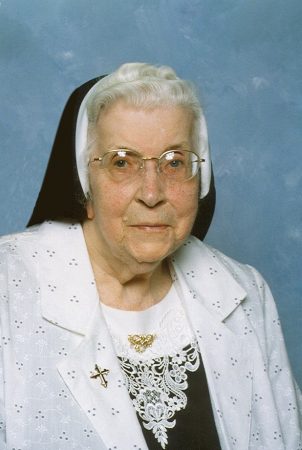 In her autobiographical essay she wrote, “My years of teaching or of work in the library, in good health or in poor health, have been registered in the Big Book; the loving and merciful Lord has walked with me and sustained me along the way. In faith and firm hope, I trust He will remain at my side until I reach the Golden Gate. All my religious life has been a prayer for priests and vocations.”

Devotion to St. Dominic came to Sister Marie Andre long before her entrance into the Marywood Congregation. She learned this at an early age from her mother and it lasted to her deathbed. She requested that the hymn “O Lumen” – Light of the Church – be recited with the prayers for the dying. “O preacher of grace, unite us to the blessed.”

Sister Marie Andre was born at Montmartre, Saskatchewan on May 31, 1910, the last of four daughters of Willie and Emma Bellemare St. Cyr. She was baptized Florence Marguerite. Of her parents she wrote: “My mother was a generous, skillful, highly cultured and artistic lady. She was always at prayer, it seemed, always ready to listen with an understanding heart.” As for her father, “I lived in his shadow.”

In 1919 the St. Cyr family moved to a large farm in Ponteix, Saskatchewan. Florence’s education began at a country school where the teaching left much to be desired until the wonderful and inspiring Miss Bertha Bonnet arrived on the scene. In high school Florence was taught by the Jesus and Mary Sisters at their academy in Gravelbourg. Following her graduation Florence attended the Moose Jaw Normal School, a branch of Saskatoon University. Her next ten years were spent doing real “missionary” work by teaching in another rural school.

From the time Florence was “knee high” the idea of a religious vocation was a thought that persisted despite her efforts to ignore it. She first met Dominicans when she came to the profession of her sister, Sister Rose William, in 1935. Eventually, “After ten years of teaching and enjoying life to the full, the Holy Spirit finally awakened me to the fact that I had too long said ‘No’ to the Lord.” Accordingly, on September 12, 1940 Florence entered the Marywood postulancy with Sister Leonora Gallagher as her novice mistress. At reception she took the name of Sister Marie Andre of St. Joseph. Throughout her life she was devoted to Brother Andre and in July 1951 she received a remarkable cure through his intercession while on a pilgrimage to the Shrine of St. Joseph in Montreal.

After novitiate under Sister M. Fabian and her profession on August 19, 1942 her mission experience began at St. John’s Home. For 40 years she taught on elementary and junior high levels in schools in Canada and Michigan: Melville, Saskatchewan; St. Alphonsus and St. Stephen, Grand Rapids; St. Francis, Traverse City; St. Joseph and Holy Rosary, Bay City; Holy Family and St. Mary, Saginaw; Prudenville and Ravenna. In the 1960’s after pursuing library studies she gradually divided her day between the classroom and the library. In 1964 after studying at Rosary College, River Forest, she became a full-time librarian.

Whether in the classroom or library each child was an individual who benefited from Sister Marie Andre’s interest, expertise, and careful professional preparation. In 1983 she ventured on a new phase of library work, first helping at Aquinas College’s Emeritus College and then working with computers in the college’s Interlibrary Loan Service Verification Department. In November 1988 she transferred her residence to Aquinata Hall replacing Sister Jeanne d’Arc as librarian.

Sister Marie Andre’s life was enriched by many hobbies and interests, including stamp collecting, music, study for pleasure, attending concerts and lectures, reading, sewing, arts and crafts. She took great pleasure in making artistic creations to be sold for the missions.

A beautiful work of her last years is an illustrated historical memoir, “Of Family and Faith,” in loose-leaf binder format. Its 171 pages contain biographies of her great-grandfather, grandparents, parents, brothers, sisters and extended family with photographs, maps, song sheets, and original watercolor paintings. The photographs show persons, homes, churches and two stained-glass windows from the old Marywood Chapel that were restored and hung in the Aquinata community room in memory of her sister Rose Anna Boufford. An appendix gives the history of Aquinata Hall and Marywood in pictures.

On October 22, 2006 Sr. Marie Andre said her final “yes” to the Lord, an echo of her many years of faithful Dominican life.

Sr. Marie Andre is survived by nieces, a nephew, many friends and a loving Community.

We commend Sister Marie Andre to your prayers.