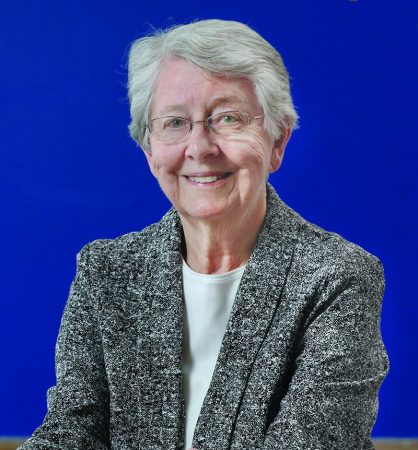 The kingdom of Heaven is like a mustard seed that a person took and sowed in a field. It is the smallest of all the seeds, yet when full-grown it is the largest of plants. It becomes a large bush, and the birds of the sky come and dwell in its branches. Matthew 13:31-32.

That a small seed can have expansive impact is an apt metaphor for the life of Sister Maria Tardani who was short in stature yet stood tall in courage, resourcefulness, dependability and faith.

Maria Angela Tardani was born in Muskegon, Michigan on May 16, 1931. The sixth of nine children, she was proud of her large family, and they remained close all of their lives. Her father Samuel was born in Italy near the city of Rome. Her mother Josephine Schillaci was born in New York City.

Maria’s sister Ann, ten years older, was like a second mother to her. Her younger sister Linda was only three years old when Maria left home to join the Grand Rapids Dominicans. During her childhood years Maria’s primary playmates were her six brothers who were her constant companions. It was they, along with the other neighborhood boys, who taught her to climb trees and play baseball, activities she much preferred to play with dolls.

For her elementary school years Maria attended St. Joseph School in Muskegon taught by the Dominican Sisters. Here she recalls that she managed to do well without much studying. That changed in her junior year when she took an interest in her studies and also realized that she had a religious vocation. Her parents were happy for her and proudly brought her to Marywood on September 8, 1949. The family’s joy was tempered soon after when Maria’s father died from cancer just six months after the date of her entrance into the Congregation.

After her profession in June 195l, Maria was missioned to St. Boniface School in Bay City. In subsequent years she taught at St. Joseph, Pewamo; St. Anne, Alpena; and Immaculate Heart of Mary in East Tawas where she served for eight years. On this she reflected: “It was both a thrill and a privilege to be assigned to IHM the year it opened. It was here that I learned to love teaching immensely. At every one of my missions either the convent or school conditions were difficult, but never both at the same time!”

Following her years in East Tawas, Maria taught at St. Mary, Hannah; and St. Joseph, West Branch. She was known as a competent teacher, fair and kind but not one to coddle her students. It was at this time that Sister Maria became aware of the Montessori Method of teaching young children. Here she found both a philosophy and method of education that resonated with her experience and conviction. She received her Montessori Primary Diploma from the Midwest Montessori Teacher Training Center in 1970 and her certification for ages six through nine in 1983. From 1969 to 1983, Sister Maria taught children using the Montessori Method first at Marywood Academy (1969-1983) and then at Stepping Stones (1983-1995).

Each summer from 1989 to 1995, Sister Maria traveled to the Center for Montessori Teacher Education in New Rochelle, New York to assist in the training of teachers. Here too, she took advantage of the proximity of the ‘Big Apple’ to attend musicals and plays on Broadway.

In her own words, Maria wrote: “The greatest opportunity of my religious life (next to meeting and living with so many beautiful women) is to be a Montessori teacher. I feel the philosophy helped me as a person and helped children see themselves as capable, important, beautiful individuals.” One of her former students wrote that her favorite teacher was Sister Maria. “I learned how to count on an abacus, learned my letter sounds and symbols, learned Spanish, and painted with watercolors—every day was fun.”

At the conclusion of her teaching career in 1995, Sister Maria enjoyed a sabbatical which concluded with a trip down the Amazon River. This had been a dream of hers for some time. Several trips to Europe, especially Italy, and a trip to Hawaii were also memorable events for Maria who loved to learn and to experience new adventures.

Another great love was gardening and so in 1997 she earned a certificate as a Master Gardener through Michigan State University Extension Program. Subsequent years were spent as both Marywood gardener and car coordinator. After eight years in these two positions, she exchanged car coordinator for finance office volunteer while continuing her work in the gardens of Marywood.

An avid reader with many interests, Maria often recommended good novels and her reputation spread so that what she recommended soon had a waiting list of readers. She followed her beloved Muskegon Catholic High School football team faithfully every fall season, and enjoyed cheering for girls’ soccer teams and other sports (notably the Detroit Tigers and Notre Dame women’s basketball). Maria was also a valued member of the Dominican Chapel Marywood bell choir, who not only faithfully attended every practice, but could be depended upon to keep the ringers’ gloves clean and bells polished.

She reflected: “During my years in this community I have most appreciated my close friends, the opportunity to become a Montessori teacher and the rich life-giving liturgical music that is so much a part of our tradition.”

Always healthy and energetic, Maria began to notice unusual fatigue and experienced weight loss in the spring of 2015; the diagnosis of incurable cancer was accepted with grace and courage. She faced the illness with a peaceful heart and never lost her sense of humor, her gracious manner; nor did she ever waiver in her faith in God’s infinite love for her. Ever the consummate teacher, she taught us all through her life and in her dying of the beauty of creation, the meaning of courage, the depth of a resourceful woman. Maria was ever dependable in all ways that mattered. She possessed an unshakable faith in the gracious mercy of God. She will be greatly missed and never forgotten by her loving family and dear friends.

We commend Sister Maria to your prayers.

“My hope was always to inspire students to be lifetime learners,” says Maria Tardani, OP, a former teacher at Marywood Montessori School, which served boys and girls from preschool through 6th grade and later provided the launching pad for the Stepping Stones Montessori School in Grand Rapids. “I also hoped that they would have a loving heart and respect for all they meet.”

Living in a Sustainable Way