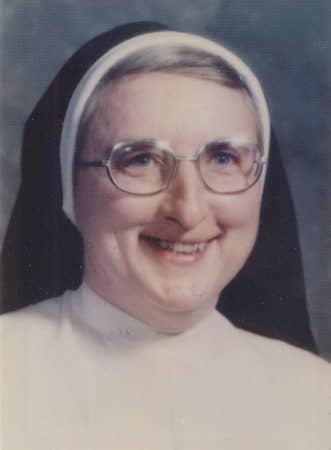 In Allegan Count (Watson Townshp) on February 20, 1930, Sister Magdalena became the second youngest of a family of seven children, two boys and five girls, born to Hugh and Blanche Durand Conway. Three of the children, Sisters Carmella, Magdalena and William Mary, became Grand Rapids Dominicans. And what is especially impressive about the Conway home was that their dear mother became a Catholic convert when she married Mr. Conway in 1912.

At St. Margaret Church in Otsego on April 13, 1930, Sister Magdalena received the saving waters of Baptism and the name of Bernadine. In 1942 Bishop Joseph Plagens confirmed her at Blessed Sacrament Church in Allegan.

Bernadine’s early education began at Miner School, a Watson County School. She graduated from Hopkins High School, Hopkins, Michigan. The life of a teacher attracted her, so upon completion of her high school, she enrolled in Allegan County Normal, and began to teach at Wright public school. For four years she taught all the grades and loved it!

She taught CCD with the St. Joseph Sisters from Nazareth, but chose to become a Grand Rapids Dominican, the Congregation her older sister had entered. At 22, Bernadine entered the postulancy on September 1, 1952, and on June 1, 1953, received the Dominican Habit and the name of Sister Magdalena of the Holy Cross. Her Profession of Vows was made to Mother Victor Flannery on June 3, 1954.

Bernadine taught at St. Andrew School as a postulant. For the next 10 years the New Mexico mission were her field of labor: one year at Our Lady of Fatima in Albuquerque; seven at San Juan Pueblo; and two at St. Anthony, Penasco where she was superior and principal. In 1964 she returned to Michigan and was the administrator at St. Mary School, St. Charles, Michigan. She was then missioned to St. Thomas in Grand Rapids. Her next assignments include twelve years at St. Mary School, Saginaw as elementary teacher and principal; and St. Joseph, Wright where she ministered for 14 years.

When she left St. Mary School in 1978, she was awarded a citation for her educational services during her twelve years of elementary leadership there. Her accomplishments included introducing a grade school band and initiating the girls’ athletic programs. During this time, she served as president of the Principal’s Assocation of the Parochail Schools, and was the Diocesan Representative of the Catholic Schools at the Saginaw Intermediate School District.

Sister was a “people person” and her love for music and singing enhanced social gatherings. Whenever Sister Magdalena was present, there was certain to be a joyful atmosphere. She had many admirable qualities: Conscientious, kind and charitable, long suffering, never complaining, happy to be of service to others, thoughtful, prayerful, and a good religious. her zeal for promoting religious vocations was very commendable. She was indeed a marvelous woman and is best remembered for her devoted care of Sister Dominic Marie Plamondon.

Sister Magdalena’s final illness began in the summer of 1992 when she was diagnosed as having bone marrow cancer. She bore this acute suffering admirably. On October 4, 1992, she accepted death with resignation and peace. How wonderful that her two Sisters in religion, Sisters Carmella and William Mary, were with her when death came as they sang the Salve Regina. As the Blessed Mother and Mary Magdalena, Sister’s patron saint, stood at the foot of the Cross, they were present when our Lord’s final call came for Sister Magdalena.

In 1984, Sister Magdalena wrote, “Most important in my Dominican vocation are the beautiful people I have met who were an example of love and understanding.” Her favorite scripture verse (John 14:1-6), was If you love me, feed my sheep.” Indeed her life was a continuum of concern for Christ’s flock, and of spending her energy for others.

May Sister Magdalena, whose earthly life is now exchanged for one with God, find fulfillment in our heavenly abode about which St. Paul wrote: “No eye has seen, nor ear heard, nor the human heart conceived, what God has prepared for those who love God.” (1 Cor 2:9)

Sister Magdalena was proceeded in death by her parents, her sister Mrs. Mary Jacobs and her brothers Russel and Ivan. She is survived by her sisters Reine (Mrs. Leander Peacock) of Lake Odessa, Sister Carmella Conway, OP, of Ubly, and Sister William Mary Conway, OP, of Wright, Sisters-in-law Mrs Josephine Conway of Highland, Mrs. Lena Conway of Kalamazoo, and a brother-in-law Mr. Eugene Jacobs of Appleton, Wisconsin, very devoted nieces, nephews, cousins and many friends.

We commend Sister Magdalena to your prayers.

Workshop Way is a system of education that leaves nothing to chance, and it is an approach to learning which provides equal opportunities for all students to learn how to learn, how to think, and how to manage their lives. It helps students develop decision-making capacities and critical thinking skills.

Sr Magdalena Conway is pictured at St. Mary’s in Saginaw from an article in The Catholic Weekly from June 19, 1970.