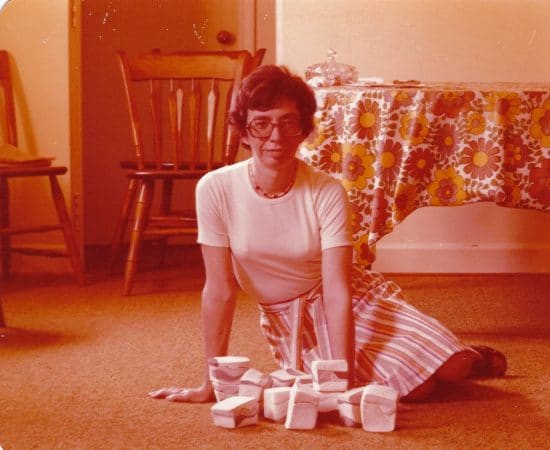 “And, as we step back and take a panoramic view of this work of art that is Madelyn we see the unifying, harmonizing strokes of goodness, beauty, and truth -- how Madelyn searched for goodness of life, beauty in creation, and truth in relationships. She wrestled with all three through her pain, her painting, and you, her people.” - Jarrett DeWyse OP, Funeral Homily for Sr. Madelyn Hronek

Sister Madelyn Hronek very peacefully died at Aquinata Hall at approximately 8:30am on Ascension Thursday, 1981. Her mother and the Sisters she lived with were at her bedside. The words from the first reading for the Ascension Thursday liturgy book took on a poignant meaning. “The exact time is not yours to know. The Father has reserved that to Himself… Why do you stand here looking up at the skies? This Jesus who has been taken from you will return, just as you saw him go up into the heavens” (Acts 1:7, 11).

On the occasion of her Silver Jubilee as a Dominican Sister, Madelyn wrote the following brief autobiographical data:

I (Madelyn Louis Hronek) was born to the late Mr. George Hronek and Mrs. Avest Hronek in Ludington, Michigan, and was raised in Muskegon with my two brothers, Thomas and Douglas. After attending St. Mary and Catholic Cetner in Muskegon, I worked for Metropolitan Life Insurance before entering the Congregation.

Madelyn entered Marywood on September 8, 1955, received the habit on Mary 21, 1956, and the name Sister Marie George of the Blessed Sacrament. In 1968, Sister returned to the use of her baptismal name, Madelyn.

Graduating from Aquinas College, I taught Junior and Senior High School and did school administration in the Detroit and Bay City areas. After completing a Master of Arts in Art Education at Wayne State University and a Bachelor of Fine Arts in Painting at the University of Michigan, I returned to Detroit to work in art education. In 1978, I came to Grand Rapids where I pursued my painting and last year was the recipient of a Residency at the Ragdale Foundation in Lake Forest, Illinois and a Fellowship at the Virgina Center for Creative Arts in Sweet Briar, Virginia.

What Sister Madelyn did not write about herself was the fact that she had been suffering uncomplainingly from cancer for several years. After each setback and every series of chemotherapy, Sister Madelyn continued living life to the fullest, taking each day as it came. At last, Sr. Madelyn’s suffering is over. “At nightfall, weeping enters in, but with the dawn, rejoicing” (Psalm 20:6)

From the Homily Given at Funeral Liturgy by Jarrett DeWyse OP

Sr. Madelyn was so looking forward to celebrating her 25th Jubilee this year (1981). Last August sitting around the kitchen table, she asked Sr. Grace Licovoli when she’d be finished celebrating her jubilee so she could begin [celebrating her own]. About two months ago, Madelyn began the liturgy planning for her jubilee mass. It is for this, her celebration of life, that we sing the songs she wanted us to sing and the Word of God she wanted proclaimed.

Relatives, Sisters, especially those of you who are celebrating your 25th jubilee, and friends — you are the people she wanted to invite! As the Sisters at 143 Lakeside prepared with her for her jubilee day, her guest list grew longer and longer — she couldn’t conceive how she could cut back the numbers — she had cut back to 80 already! But as the Lord had been guiding her during her life, he was guiding her plans for this day also.

He gave Madelyn a way to gather all of us together to celebrate with her. On the beautiful Feast of the Ascension he returned, and in the promise of today’s Scripture, “I shall come back to take you with me,” he gently took her by the and and is now showing her the home he had prepared for her. And so — we celebrate the Lord’s faithfulness to her, and [we celebrate] Madelyn’s gratefulness to Jesus, her Lord.

Our celebration of faithfulness and gratefulness starts with a picture she has painted for us. Allow me to describe the details. Madelyn has used the 44 years given her by the master artist.

She prepared her canvas by stretching her courage, her patience, her determination far beyond what some consider necessary. Her creative power exhibited in her art work was equally matched by her creative, silent suffering — something she never wanted us to talk about.

She gathered the materials from her family storehouse of good gifts. It is obvious that she learned from her parents to enjoy the company of good people, good stories, good humor.

She softened the brushes with her love for people. Madelyn took delight in preparing special meals, and serving guests for lunch. Her gift of gracious hospitality has been extended to many of you gathered here today.

The colors were blended with her careful strokes of love for her community. All those who have lived with her verify that her kindness, appreciative words and deep sensitivity have helped one or another of us in our loneliness, our weakness, and our limitation.

One night last year she took out a list of all the Sisters that she lived with on the missions; and in her reminiscing, she told me that she frequently prays for people on that list. Sisters, you mean a lot to her! Her most recent community project was to help organize the day for all the former members, held just last Saturday!

And, as we step back and take a panoramic view of this work of art we see the unifying, harmonizing strokes of goodness, beauty, and truth — how Madelyn searched for goodness of life, beauty in creation, and truth in relationships. She wrestled with all three through her pain, her painting, and you, her people.

The final touches on this masterpiece can best be characterized by the word BATTLE. Have you ever been to a birthday party for an eight-year-old? Eight years old! Doesn’t sound like very long to be alive, does it? But eight years of doing battle with cancer is a very long time, and as this year unfolded itself, Madelyn grew tired — yet Sisters and friends, she still never complained. She just said, “I’m tired of it all.”

I guess the meaning of the word “battle” is best revealed in an incident this week, when from her deathbed she described seeing Jesus across the street, hiding behind a tree. And when asked if she’d like to invite him over to this side she responded, “No, leave him over there; I’m not ready yet.”

The frame around the picture is the sacrifice of Jesus and her faith in Him. He took her small, weak, broken body with his own, long ago, when he hung on the Cross. So, when we break bread today, let us remember that we are one with Madelyn, by the life-death-resurrection of Jesus. Let us find comfort in this liturgy and in each other as we present Madelyn — this precious piece of faithfulness — to Jesus the Lord.

Mrs. Hronek, Douglas, Tom, Darlene, Mark, Todd, David — we praise God with you that he has purchased this treasure, has given her a new home, a new dwelling place with all the angles and saints in heaven. What a Jubilee! What a Jubilee!

We commend Sister Madelyn to your prayers.

Sister Madelyn Hronek gift of painting was something that brought her great joy and peace — and became something she shared with others in exhibits and art commissioned and sold.