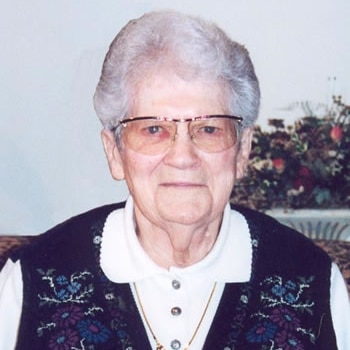 “I have been on a long journey since birth,” wrote Sister Lucille Leannah on the occasion of her Golden Jubilee in 1984; and the journey continued for 19 years after that.

Stage one of her five-stage journey, which lasted for 18 years, was spent in Marinette, Wisconsin, with a large family and a saintly mother who led them in a daily rosary and a “litany” of prayers to saints. Lucille was the eighth child and at her birth neither she nor her mother was expected to live, but both pulled through. At Lucille’s baptism, Fr. Vassiere discerned “three good signs” on her forehead and predicted that she would live and do good in the world. Her mother lived to bear seven more children.

Although Lucille’s health was at first delicate, in the eighth grade she became strong enough for swimming, ball games, and ice-skating. In her second year at St. Joseph School, the Franciscan Sisters were replaced by Dominicans, fondly named “White Angels.” Lucille loved Sister Angelica and was attracted by the happiness, joy and beautiful spirit of the Dominicans. During high school, when the Sisters went to summer school, Lucille took over the sacristy. On Saturdays she worked in the Five and Ten Cent Store and used her dinner hour to prepare the altars for Sunday Mass.

Lucille felt a call to religious life, but resisted until her junior year. During an evening session when visiting religious were describing their orders and their own calls, she felt an inner voice telling her to be a Dominican. She confided in her mother, and asked her to break the news to her father and to Sister Alberta. Her father did not approve but would not interfere. Sister Alberta, naturally enough, did approve and helped with the arrangements.

For the reception of Sister Norbert (now Sr. Marjorie Vangsness), Lucille went to Marywood with her mother, sister, Fr. Vassiere, and other parishioners, intending to stay and enter. The austere atmosphere of the Blue Parlor at first made her uneasy, but when Sister Jerome came in she felt right at home. She stayed. This second stage of her journey was a short time of preparation (1934-37) “to face my God by way of prayer, education and Dominican community living.”
On September 8, 1934 she entered the Community at Marywood. On April 23, 1935 she received the habit of St. Dominic and was given the name of Sister Lucille of Our Lady of Perpetual Help. Her First Profession of Vows was made to Mother Euphrasia Sullivan on August 5, 1937. On August 5, 1940 she made her Final Profession.

After profession, she embarked on the third stage of her journey, 12 years in New Mexico. There she taught in public schools in Santa Cruz and Penasco until the Dixon Case. During this time she earned her degree, Bachelor of Science in Education, from Catholic Teachers College, New Mexico in 1948.

Sister Lucille was back in Grand Rapids for the fourth stage of her journey; nine years at St. John’s Home. She began as a prefect but soon became administrator and helped shelter homeless and neglected children.

The fifth stage for Sister Lucille was mostly in New Mexico, beginning in 1958 and continuing for decades. This period was interrupted by a return to Michigan for three years as principal of Holy Rosary Academy, Bay City. Before that she was teacher and then principal at St. Francis School, Ranchos de Taos. After her return, she was principal at Our Lady of Fatima, Albuquerque (1968-88). There she served on numerous parish, archdiocesan, and civic boards. She was once honored as Principal of the Month, and received glowing tributes for operating a school with firmness and kindness, with high ideals and standards of discipline, innovative materials and in-service programs.

In 1988, Sister Lucille became principal at Holy Cross in Santa Cruz. She was inducted, in 1992, into, “The Elite Registry of Extraordinary Professionals.” There her accomplishments are listed along with those of other prestigious Chief Executive Officers.

To celebrate her Diamond Jubilee and her 49 years of service in New Mexico, friends from various locales gathered to roast and pay tribute to her as a principal and teacher who loved children. Those who have worked with Sister Lucille speak warmly of her as a woman of prayer and trust, of high integrity and vision, sensitive, compassionate, and encouraging. Those who have lived with her describe her as kind, fun loving and gentle. Fr. Vassiere’s reading of the signs on her forehead proved prophetic. She lived long and did much good in the world.

“Grow old with me…,” Jesus seems to have said. The signs on her baby forehead mellowed and furrowed with her years and named her for life and leadership in the army of God. The best was yet to be, and so, Jesus himself came to accompany his faithful spouse on the finale of her journey. Sister Lucille was born to eternal life on December 28, 2003.

Sister Lucille is survived by her sister Joyce Harter of Menominee, Michigan and her brother James Leannah of Marinette, Wisconsin; nieces, nephews, many friends and a loving Community.

We commend Sister Lucille to your prayers.