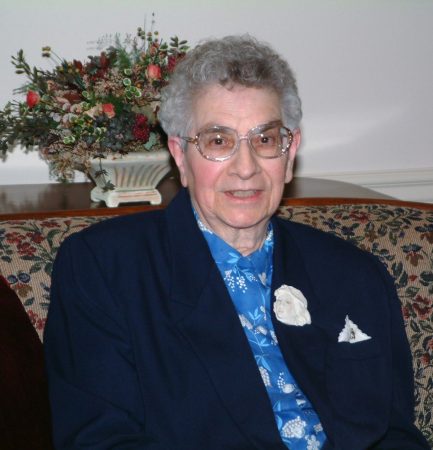 “I try to be kind to everyone. I am a happy person. I have so much to be thankful for.”

These brief sentences sum up a long life of faith, few words and even fewer demands. Ever ready to help others, Sister Lourdes Palazzolo will be remembered for steady reliance on God and her ready affection for family and friends.

Born in Grand Rapids, April 6, 1918, she was the fifth child of Vito and Loretta Franchi Palazzolo, who had come to America from Palermo and Naples, Italy. In memory of a deceased aunt she was named Louise Margaret. For fifteen years she enjoyed the role of “baby of the family” before a younger brother, Faro, and a sister, Anne Leone, were born.

Parishes in Grand Rapids at the time were predominantly ethnic in population. Although the family lived around the corner from St. Joseph church and school, Louise was baptized at the Italian parish of Our Lady of Sorrows. In the early 1920s, Italians were not permitted to attend St. Joseph’s school, so the Palazzolo children went to Franklin public school. Louise attended kindergarten there, but soon, the bias against Italians lessened and she and her four older siblings were allowed to transfer to St. Joseph’s. When time came for Confirmation, however, her parents considered it their duty to send her to the Italian parish for that was their true parish home!

Louise found school difficult. A slight speech defect and crowded classrooms contributed to her lack of confidence in her academic ability. She attended Catholic Central High School and graduated in June 1937. For years she had been thinking of entering the convent, but she looked on her teachers as “creatures of heaven” and questioned her own worthiness to join them. So after graduating, she remained at home. Then she confided in Sister Leone, who helped her get admitted to Catholic Junior College – later Aquinas College. While there she found her Dominican teachers approachable and decided that this was where she belonged. When she informed her parents, they were not enthusiastic because in Italian families, girls were supposed to get married. But they offered no resistance.

On September 8, 1939, Louise entered as a postulant at Marywood and at reception asked for the name of Mary Lourdes of the Immaculate Conception in keeping with her many years of novena devotions. She had little confidence in her ability when was sent to her first mission, St. Joseph, West Branch, in 1942, but with the kindness and advice of Sister Cecile she succeeded. After eight years there, she proceeded to Sacred Heart, Merrill; St. Joseph’s, Weare; St. Philomena, Beal City; St. Rita and St. Casimir, Saginaw; St. John’s, Essexville; St. Mary, St. Charles; and St. Catherine, Ravenna.

Sr. Lourdes enjoyed outdoor activities and she enjoyed joining the children in sports on the playground or in the gym. In summers she completed her studies for a Bachelor of Science in Education from Aquinas (1956), and taught catechism classes and remedial reading. About her teaching years she stated: “For thirty-seven years I taught the primary grades. I never regretted it and was very happy to have had the privilege of preparing over one thousand five hundred children for their first Holy Communion.”

In 1979 Sister Lourdes began a new phase of ministry at the House of Studies in Grand Rapids, which had become a pre-retirement home for older sisters. There she drove Sisters to their various appointments and assisted in housekeeping duties. She was happy to be stationed in Grand Rapids where she could help her family, including her sister Gerri and her mother. Sister Lourdes suffered a broken hip and had a replacement in 1981 but was soon recovered sufficiently for driving. In 1985 the residents of the House of Studies moved to Marywood, where she became a community chauffeur and maintained the automobile fleet in both maintenance and upkeep. In 1988 she had a second hip replacement.

Sister Lourdes was cheerful, gracious, plain-spoken, and cooperative. She was among the first to enroll in the PACE program which provides a new way of health care for the elderly in Kent County. There she was a popular friend to many and remembered fondly by the staff. Her hobbies and interests included sports, traveling, listening to music, and eating out for pizza – a vestige of her proud Italian heritage. Her other point of pride and enthusiasm was her devotion to the Notre Dame Football Team. She never passed up an opportunity to listen to or watch her favorite team.

An experience she relished was her few minutes of fame on television. Dan Goggins, the writer for the popular play and movie, Nunsense, had been a student of our Sisters in Alma and visited Marywood to film a prelude for the televised version. He asked for volunteers to act out the scene wherein the Sisters die from eating the soup prepared by the character, ‘Sister Julia Child of God’. Ever the good sport, Sister Lourdes was one of the volunteers eager to “drop dead” landing unceremoniously facedown in her bowl of soup!

She was still active enough in 1998 to make a pilgrimage to Fatima and Lourdes, the site of her life-long devotion. For the last years of her life, she resided at the Marywood Health Center where she continued her ministry of prayer.

Sister Lourdes is survived by her sister Anne (Abraham) Rossi and her brother Faro (Phyllis) Palazzolo of Grand Rapids; nieces and nephews, many friends and members of her Dominican community.

We commend Sister Lourdes to your prayers.

Sister Lourdes on the right pictured with Sister Ermina Thelen in the center in 1956.

Sister Lourdes wearing dark glasses in her costume for Nunsense in 1993.