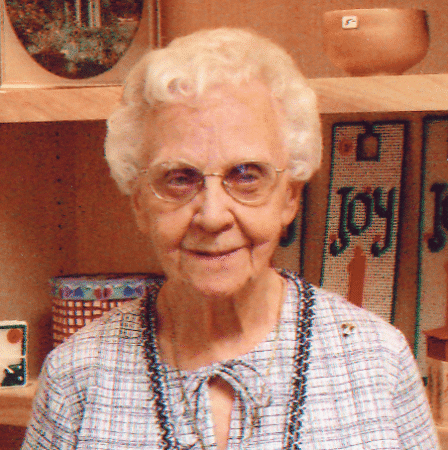 The Lord is my Shepherd; I shall not want. -Psalm 23

This Biblical verse was Sister Louisa’s favorite, and it perfectly reflects her trust in God who was central in her life and all her undertakings.

Marian attended Edgewood Elementary School until the sixth grade when she was able to attend the newly opened Sacred Heart School. She transferred to St. Mary’s High School in the tenth grade, graduating in 1947. At both Sacred Heart and St. Mary’s Schools, she came to know the Dominican Sisters, and she enjoyed spending time with them helping with sacristy work, correcting papers, and decorating bulletin boards. Early in her life she was attracted to religious life, and she credits Sisters Veta Marie Gase, Rose Miriam Visner, and Bede Frahm for encouraging her to become a Dominican. Msgr. Albert Kehren, her pastor, also encouraged her vocation to enter the convent.

On September 7, 1947 Marian entered Marywood. She received the habit of St. Dominic and the name Sister Louisa of the Holy Rosary on March 11, 1948. She made her first profession one year later, and final vows August 15, 1952.

Sister Louisa’s first ministry was in food service, but she soon realized that teaching little ones was her true calling. She became a primary teacher for the remainder of her professional life. She was happy in this role and served with creative energy and effective methodology.

She advocated for the Workshop Way® teaching method when that became available. Her teaching career spanned over forty years and all of them, save a few at the beginning, were teaching first graders. During her first six years of teaching, she taught double grades with both first and second graders. She was known, both in and out of the classroom, as one who was always gracious and hospitable.

Sister Louisa earned a BA from Aquinas College and received her permanent certification in Elementary Education from the Michigan Department of Education.

Although reluctant to leave the classroom, Sister Louisa realized that the time had come to let go of full-time teaching in 1989. She continued to teach religion classes in the first grade, however, and assist in ways that she could at St. Mary in Gaylord for another four years. There she continued to be an enthusiastic supporter of the student athletes, and an avid fan of the basketball team, rarely missing a game. Her enthusiastic cheering surely helped spur the team to victory on many occasions. Besides spectator sports, Sister Louisa enjoyed reading, arts and crafts, working on jig-saw puzzles and playing cards.

Her boundless energy continued to benefit the Sisters with whom she lived, and she found many ways to continue in ministry after retiring from the classroom. At both Aquinata Hall and at Marywood Health Center, Sister Louisa served as sacristan, coordinator of the crafts room and manager of the gift shops – first at Aquinata Hall and then at Marywood Health Center when the Sister-residents moved there. She carefully arranged displays and made items to sell. She also found time to deliver mail, swiftly pushing her cart through the halls and cheerfully greeting all she met on her travels.

She reflected on her life of ministry with these words: “I thought when I came to Aquinata Hall in 1993, that I would like to be an aide, but that was not my calling. Instead I took over the sacristy, arts and crafts room and the gift shop. I help out wherever I am needed.” Sister Louisa’s favorite color was yellow because, as she said, “It is bright, and I want to bring sunshine and joy to everyone I meet. I want to be cheerful and giving.”

Prayer and community life were a constant in Sister Louisa’s life. She ended her personal reflection on her life with the following: “I pray and ask forgiveness from anyone I have hurt in any way, whether it be in speech or action. May I ask you to pray for me, too?”

A trusting soul, a bright light, a cheerful companion, Sister Louisa will be greatly missed by all who knew and loved her.

Sister Louisa is survived by her brother Steve Mogdis of Muskegon, MI; nieces, nephews, many friends, and members of her Dominican Community.

We commend Sister Louisa to your prayers.

Many of the items sold in the Bookstore at Dominican Center are made by Sisters. Sr. Louisa was an avid seamstress and made many beautiful and useful gifts for the Sacristan Crafts Ministry.

Sister Louisa Mogdis’s taught children of Gaylord at St. Mary Cathedral School. She was trained in the Workshop Way, a method of teaching “geared to help children develop the power to think and to learn how to learn, to learn to read, and how to love it all,” said Sister Louisa in an interview for the local newspaper. “Children are encouraged to move at their own pace and are challenged according to their level of comprehension.”

Asked once to choose the color that best described her ministry, Sr. Louisa said, “Yellow, as it is bright! I want to bring sunshine and joy to everyone I meet. I want to be cheerful and giving.”

Cheering on her favorite sports team, the St. Mary Snowbirds, at St. Mary High School in Gaylord, Mich. delighted Sister Louisa and those around her. She lit a candle before every game and the students reserved a special cushioned seat for her.