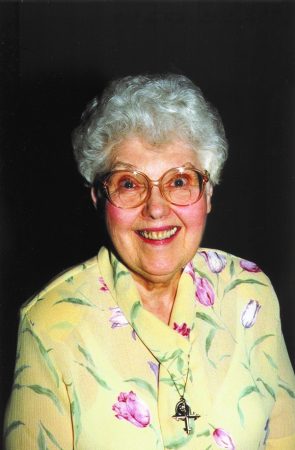 “Where the Spirit of the Lord is, there is freedom, and we, with our unveiled faces reflecting like mirrors the brightness of the Lord, all grow brighter and brighter as we are turned into the image that we reflect.” 2 Corinthians 3:19

“Where the Spirit of the Lord is, there is freedom, and we, with our unveiled faces reflecting like mirrors the brightness of the Lord, all grow brighter and brighter as we are turned into the image that we reflect” (2 Cor. 3:19). This was the favorite scripture passage of Sister Lois Schaffer, a free-spirited artist who reflected that image in her person and through her paintings and mosaics.

Colletta Schaffer was the first of a family of six girls and two boys born to Frank and Cora Marguerite Fagel Schaffer in Mount Pleasant. At her birth by caesarian section (Jan. 25, 1919), the doctor predicted that she would either die or be severely mentally disabled. She was preserved, she believed, by her parents’ deep faith and prayer life. Her father never told her about the doctor’s prediction until she won a scholarship to study art in Italy — “Then he thought I could ‘take it.”

As a child Colletta liked to dress up as a Dominican Sister, using old sheets, baby diapers, or anything else she could find. She attended grade school at Sacred Heart Academy. When she began high school, social life put thoughts of the convent out of her mind. Early in the second semester of her sophomore year, after giving a party for Colletta’s 15th birthday, her mother became ill with pneumonia and died a week later. Colletta promised her father to stay home from school to keep the family together — except for the five-month old baby who would be too much for her to handle. A childless couple who had prayed 14 years for a baby adopted Tommy. In September her grandmother came to live with the family so Colletta could return to school.

During a retreat in her senior year Colletta felt the Lord gently but strongly calling her, and she responded by entering Marywood in 1936. It was hard on her family, but “as each one left home, the next in line would take over with Grandma’s help.”

At reception she took the name Lois. Her first mission was Beaver Island, an ideal place for her free spirit and delight in the outdoors. After five years on the island she was assigned high school teaching at Holy Trinity, Alpine; Holy Family and St. Joseph, Saginaw; and Marywood Academy.

Sister Lois’s education was broad and international. It began with a B.A. from Aquinas College (major in English); a certificate from the Theological Institute at Saint Paul’s Seminary, Saginaw; Master of Fine Arts from the Pius XII Institute in Florence, Italy; other study at St. Mary of the Woods, Indiana; Chicago Art Institute; Catholic University of America; Sophia University, Tokyo; Creighton University, Nebraska and Steubenville University, Ohio.

Her two years at Villa Schifanoia (Florence, Italy) fulfilled a desire to study the art masterpieces in Europe. She took advantage of opportunities to travel — from Ireland to Istanbul, Turkey. She had two private audiences with Pope Pius XII, during which he asked, “When are you going to change (update) your habit?” On her return she began to experiment with the habit and took Sister Robina as a model to Mother Victor, who was horrified. Such experiments had to await another pontiff and another prioress.

Sister Lois’ appointment to Aquinas came in 1960, when Dr. Oscar Schweigart, who had initiated art courses there, died suddenly. She spent sixteen years building up the department. In the summer of 1970, after a long siege with Asiatic flu, she went to New Mexico for her health. She made her retreat at the Benedictine Monastery in Pecos and developed an enduring love for charismatic prayer. Two years later she was able to spend the summer in Japan through contributions from her former art students. In Tokyo she studied Japanese Art and helped build up the Matsudai Charismatic Community.

In November 1975, a fire in the Aquinas faculty studio reduced her art work of 25 years and her equipment to a charred heap. Then through burglary in her office she lost her camera and contributions she had received to offset her losses. In spite of other complications she went to Pecos for a Christmas retreat. On her return she found an invitation from Sisters Jean Reimer and Jeannine Kalisz to go to Guatemala and paint the history of salvation on the walls of a church there. She requested permission to go to Guatemala for the summer and to Pecos for the year. When she was told instead to go to Guatemala for the year, she answered, “I will do whatever you say but will pray that the Lord changes your mind.” That night an earthquake destroyed the church in Guatemala and she was allowed to spend the year in Pecos. One year extended to two years. She was a member of the retreat team in the monastery and mission teams to parishes in the southwest. She also taught art and became a spiritual director.

Returning to Marywood, Sister Lois was program assistant and teacher at Emeritus Center for a year and then served on the Pastoral Ministry/ecumenical outreach team. In 1985 she entered a new phase of pastoral ministry at Saint Rita Parish, Wellington, Florida, and teaching art at Pope John Paul II High School in nearby Boca Raton, Florida. This was interrupted for two years by commissions from the Pecos monastery for two mosaics: The Glorious Risen Christ and The Transfiguration. During her Florida ministry she traveled to the Holy Land, Medjugorje, Hawaii, and Oberammergau for the Passion Play. She also made a mosaic, Jesus of Mercy, for the new St. Rita Church and assisted in an exorcism which was filmed and shown on the 20/20 television program.

Over the years Sister Lois lectured on art to many groups. She focused on “bringing into a whole the deeper meaning of ethical, moral, and esthetic values, attitudes and sensitivities in being a total person in today’s world.” She exhibited paintings in numerous shows. Her non-movable works include triptychs, stained glass windows, and mosaics for churches. Her wooden sculpture of St. Dominic is among the holdings of the Marywood Heritage Room. She has served as a member of the Board of Trustees of the Grand Rapids Art Museum and taught graduate courses in art for extension services of University of Michigan and Michigan State University.

In 1993 Sister Lois returned to Marywood as a spiritual director and a member of the Prayer and Listening Line, for which her own deep prayer life and her sympathetic nature fitted her well.

Pope Paul VI once described artists and in so doing described our beloved and beautiful Sister Lois when he said:
Artists are “creators, vivacious people and stimulators of a thousand ideas and of a thousand inventions. . . . Your art is precisely that snatching of the treasures of heaven and of the spirit and clothing them in understandable words, colors, and forms.” We celebrate with gratitude our sister-artist Lois who now enjoys the company of the great artist-creator God in Heaven.

We commend Sister Lois to your prayers

Sister Lois with the finished moasic