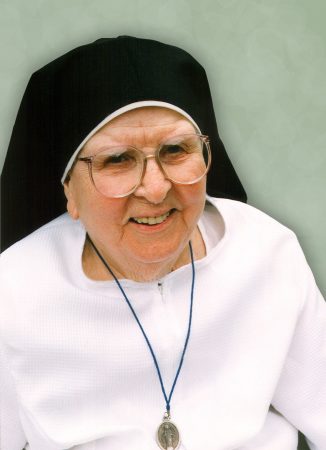 At the time of her Golden Jubilee in 1984 Sister Leo wrote, “My life has been happy in the Community, and I thank the good Lord and the Sisters for putting up with me.”

Sister Leo loved to travel! Both before her entrance into our Community and since that time she has done considerable traveling in the United States and Europe. This gave her much enjoyment, and she derived much knowledge and cultural enrichment. On February 3, 2007, she made her final and most important journey: Heaven was her glorious destination to be with God and all the blessed for all eternity.

Life’s journey for Sister Leo began on February 29, 1908 in Crockery Township (Fruitport), Michigan when she was born to Joseph and Mary Mergener. She was the last of their four children, three girls and one boy. Of her childhood, Sister Leo wrote, “My childhood was spent in the country, free from all care, with good parents who brought their children up in the Catholic faith.” She received the sacred waters of Baptism on April 2, 1908 at St. Michael Church, Dennison and was given the name of Gertrude Catherine. Her Confirmation by the Most Rev. M.J. Gallagher was at the same church on June 25, 1918.

When Gertrude completed her formal education at Smith School in Fruitport, she was happy and content to remain at home to be of help to her parents until she was twenty-one. At that time her older sister came home, and that left Gertrude “free to do as she pleased.” For Gertrude this meant working for others and traveling.

Gertrude did not, however, “do as she pleased” for very long as the “Hound of Heaven” was in pursuit of her. Of this, she wrote in her autobiography, “All the years since I was sixteen, I knew I had a vocation, but did not want it. I did everything in my power to forget it, but it was in vain. At last, after fighting against it for so long, I happened to go to Marywood one Sunday afternoon with my cousin, who is a Third Order Dominican. I was so surprised with the courtesy of Sister Jerome that I thought I might like to try it, and two months later I entered.”

On February 4, 1934, at the age of almost twenty-six, Gertrude became a postulant under Sister Jerome Smithers’ direction. On August 21, 1934, she received the Holy Habit of St. Dominic and the name of Sister Leo of St. Catherine of Siena from Mother Eveline Mackey. On August 24, 1936 she made her First Profession of Vows to Mother Euphrasia Sullivan recently elected Prioress General. She was a member of the famous class of nineteen “lovely girls” who remained steadfast and true from their initial beginning to their Final Profession of Vows.

After her first profession, Sister Leo began her apostolic labors as a Food Service Director. This was a service in which she was very happy for over fifty years. She was not only a marvelous cook and baker, but she had the gift of putting an artistic touch to all she prepared. Her kitchen was always the center of life and congeniality; this was generally the Sisters’ first stop coming home from school. She was a true friend to ever so many both in the Convent and outside. Sister was a wise, kind, generous, and good woman who had the special gift of being a good listener. This was true through her final years as an Aquinata/Marywood Health Center resident where she dispensed not only kind words but sumptuous homemade pies.

Her assignments, which began at St. Joseph Seminary, were to take her to several places. In Grand Rapids, in addition to the Seminary, the following places were blessed by her ministry: St. John’s Home; Aquinas College Convent; Catholic Central; St. Stephen and Marywood. In Michigan she also served at Hannah; Gaylord; St. Mary, Saginaw; St. Joseph, Bay City and Ravenna. For two years, she was stationed at our Nazareth Hospital in Albuquerque, New Mexico.

Two places, where Sister Leo ministered for a number of years, deserve special mention. St. John’s Home was privileged to have her services for fourteen years. Here she enriched the lives of all, but especially those of the orphans to whom she was so very kind. She made St. John’s a real home for them. Some continued to visit here at the MHC. The Sisters at Catholic Central Convent in Grand Rapids, where she spent eleven years, were also appreciative of her work and dedication. In 1977 at a special School Assembly, she and Sister Rita Lucille Leirich were recognized and honored by the School Administration. The school was most mindful of the adage that “an army marches on its stomach.” Then, too, not only had the Sister faculty benefited from the provision of “the daily bread”, but these Sisters not infrequently had enriched school events with generous gifts from the kitchen.

Her favorite Scriptural passage was from Ecclesiastes, “Vanity of vanities! All things are vanity!” This gives us an insight into her common sense and straightforward manner of dealing with life. When asked for a comment on her Scriptural passage, she remarked without any fanfare, “All life is passing and the end is what is important.”

Surely for Sister Leo, for whom prayer and community life were first priorities, her final end now means a life of joy, peace, and love with her God whom she served so well and long. We are grateful for her loving ways and her rich and devoted life of joy-filled faithfulness and untiring labor. May she who prepared countless delicious meals for others now feast at the banquet of God’s everlasting love.

Sister Leo is survived by several nieces, nephews, grandnieces and grandnephews, many friends and a loving Dominican Community.

Entered eternal life on February 3, 2007 at the age of 98 after 73 years of religious life

We commend Sister Leo to your prayers.