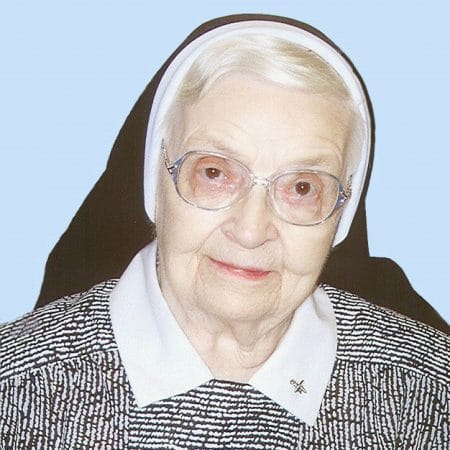 On January 28, 1917, the biting winds of a Saskatchewan winter were, perhaps, piling up snowdrifts about the farm home, or maybe a Chinook wind had brought a January thaw — in any case there was warmth and joy within as Edward and Catherine Ogle Fitzgerald welcomed a baby daughter. When it was possible to take her to church on March 11, she was christened Madeline Mary Helen in the Rosetown parish church of Ste. Therese de L’Enfant Jesus.

Canada was embroiled in World War I, but the sounds of battle were far from the peaceful prairie farm where Madeline grew up and attended Grades 1 and 2 in the local rural school. All changed when her father died in 1925 when Madeleine was eight years old. Her mother moved her family to town, and Madeline continued through Grades 3 and 4 in the Rosetown public school. So that Madeline would get a religious education her mother, at some sacrifice, sent her daughter to the Ursuline boarding school in Muenster. Fortunately, Madeline’s separation from the family did not last long. A parish school was opened in Rosetown and there, under the tutelage of the Sisters of Adoration of the Sacred Hearts of Jesus and Mary, she completed eight grades.

When Madeline was 14, Sister Ursula Lancieux, a Dominican Sister from Grand Rapids, came to visit her brother who lived near Rosetown. Madeline met Sister Ursula and as a consequence, she came to Grand Rapids to become an aspirant in the community. Madeline’s uncle, Father Francis Ogle, had met Sister Ursula earlier and had requested Sisters to help in his parish. Zealous for Catholic education, he sought Sisters to teach catechism during the summer wherever he was assigned. As a result of this contact, four Grand Rapids Dominicans came to establish a parish school in Melville, Saskatchewan. Many young women were to enter the congregation under Father Ogle’s direction.

Madeline completed her high school at Marywood Academy, entered the novitiate in 1934 and received the habit in 1935 taking the religious name of Sister Kenneth of the Infant Jesus. In 1937 she made first profession of vows to Mother Euphrasia Sullivan, and professed final vows in 1940.

From 1937 to 1944 she taught fifth and sixth grades at Holy Family School, Saginaw, spending her summers working toward a degree at Aquinas College. Succeeding years saw her teaching at Marywood Academy, St. Mary’s, Saginaw; and Blessed Sacrament, Grand Rapids. Following the completion of an M.A. Degree in Educational Administration, she held positions as directress and principal in several locations–St. Alfred’s, Taylor; Our Lady of Fatima, Albuquerque; Holy Rosary, Bay City; and Catholic Central, Grand Rapids. She returned to Marywood as principal in 1970 and then as community hostess in 1977, a position for which her gracious manner, quiet competence, and organizing ability made her admirably fit. After a year as principal in Chesaning, she made a change in ministry and served as pastoral minister at Madonna Villa in Fraser, Michigan, a position she held until 1988. Her outstanding success in dealing with elderly citizens led to a position as health care coordinator at Northview Manor, where she remained until 1992. In that year she returned to Marywood as treasurer, which she fulfilled with characteristic grace and charm until July 1, 1999. The statement written on the occasion of her Golden Jubilee sums up her life:

Sometimes I compare these past fifty-five years of being here to a quilt my mother made for me. As you perhaps know, the process of quilting involves hundreds of needle piercings, thread snarlings, rough-edge foldings, and ironing out of creases. But, what beauty enfolds! All the necessary hardships meld into a combination of lovely colors–and only the deep dark shades can enhance the glad bright, uplifting hues. And so, as I look back on these years of being with the young in school and the elderly now, I can say with Tobit: “Consider what He has done for you and praise Him with full heart.”

In her last years, when health failed, Sister Kenneth pursued her lifelong love for reading. In fact, one can find her name on the checkout card of nearly every book in the Marywood Health Center Library. A Dominican to the core in her love for study, community, service and prayer, Sister Kenneth continued to praise God with full heart until on July 9, 2012 she was called to the eternal praise of heaven.

We commend Sister Kenneth to your prayers.

Sister Kenneth pictured in the center in the 1950s