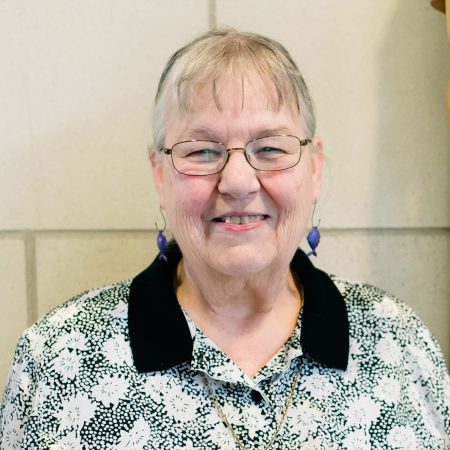 Catherine Ann was born June 30, 1940, one of eleven children of Bernard and Alice Ann Stoeckle Hartman. For both elementary and secondary education, she attended SS. Peter and Paul School in Saginaw, Michigan, where she met and grew to admire the Dominican Sisters. Katrina noted that Sister Marie Vianney Giordano, who was her teacher in the early elementary grades, was a particularly inspiring influence in her decision to become a Sister.

Stirred by a desire to serve God and others, she entered the Congregation in 1957. At the time of her reception, she received the name Sister Katrina of the Good Shepherd, which she kept throughout her religious life. Good friends affectionately called her “Trink.”

Her teaching career began in 1962 at St. Mary in Lake Leelanau where she taught grades 7 and 8. She completed her B.S.in chemistry at Aquinas College in 1964, and an M.S. in chemistry from Bowling Green University in Ohio in 1974.

Her love for science found its expression through an entire teaching career in that field in high schools staffed by the Dominican Sisters and eventually at Aquinas College. High schools include St. Michael, Maple Grove; Sacred Heart, Mount Pleasant; St. Francis, Traverse City; and Catholic Central, Grand Rapids where she ministered for thirteen years, and took a special interest in supporting sports for women.

Pursuing her passion for chemistry, Sister Katrina enrolled full time for three years in the doctoral program at the University of Illinois at Chicago, receiving her doctorate in Chemistry from that university in 1993. Her skills and dedication were recognized there when she earned the Bernard B. Babler Award for Excellence in Teaching which is given annually to the best teaching assistant in freshman chemistry.

While writing her dissertation she resumed her ministry at Aquinas College, which became the next beneficiary of her excellence in teaching. For nearly thirty years, Sr. Katrina taught chemistry in the science department at Aquinas College, serving as the chair of that department on several occasions. A generation of science leaders was formed with her passion for learning.

Following her retirement from Aquinas in 2013, Sr. Katrina’s love for both teaching and science came full circle as she volunteered her experience and expertise at San Juan Diego Academy, an elementary school serving mostly Hispanic students, infusing the science curriculum and learning lab with her knowledge of and enthusiasm for science.

Her love of nature was deepened during her years as a volunteer at Frederik Meijer Gardens & Sculpture Park. She could often be found with a smile on her face welcoming members as well as inviting new folks to take in all the familiar sites and the latest additions.

In April 2017 Sister Katrina was honored for her years of service at Grand Rapids Catholic Central High School, receiving the Dominican Spirit Award. At the award ceremony, she was recognized as the embodiment of Dominican Spirit for her ministry legacy.

Of late, Sister Katrina enjoyed assisting at Aquinata Hall where she offered her services to Sisters and staff. She was much appreciated for her driving skills, especially with the minibus that took Sisters on excursions even to a Notre Dame Women’s basketball game.

Sister Katrina was an advocate for social justice and was particularly interested in promoting the rights of women. Always a willing mentor and guide for the young, Sister Katrina served for many years as a member of the T.E.C. movement (Teens Encounter Christ), where she supported teenagers on retreats to deepen their sense of spirituality and relationship with God. Reunions of these groups were always loud with laughter and large with memories.

When the Good Shepherd called her name, at an unexpected hour and day, she was ready. Her good works go with her.

Sister Katrina is survived by her sisters: Elizabeth Hawkshaw and Jean Lupton of Fort Charlotte, FL and Dr. Nancy Artley of St. Cloud, MN; and her brothers: Bernard (Ruth) Hartman of Saginaw, MI; Alan (Sue) Hartman of Scottville, MI and Duane (Barbara) Hartman of Gaylord, MI and sister-in-law Carolyn Hartman of Bridgeport MI; nieces and nephews, many friends and members of her Dominican community.

We commend Sister Katrina to your prayers.

Pray for those involved in teaching and doing science