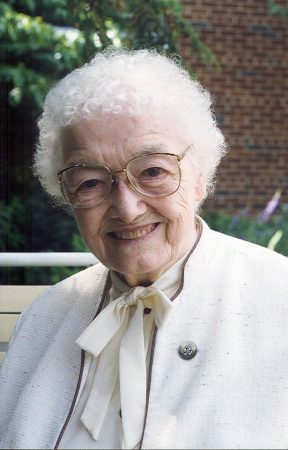 Sister Katherine once remarked, “I have always wondered why the Lord chose me and brought me so far away from home to do His work.” Yet she was ever grateful to God, to her family, her Dominican Sisters, and other people she had met along the way for the good things she had experienced.

October 2, 1929 was a day indelibly inscribed on the memory of Sister Katherine Power. On that day she left her beloved Ireland to board a huge ocean liner at Cobh (Cork). The tower bells at St. Mary’s Church played “Come Back to Erin” as this fifteen year old girl along with four other Irish lasses left their homeland for America. Sr. Coletta Baumeister and Sr. Edith Welzel had come to Ireland to recruit prospective candidates to religious life. So it was that five interested Irish girls accompanied by Sister Edith, sailed to America on that fall day. Remembered, too, was the royal reception at Marywood upon their arrival – the whole Marywood community including the Academy girls lined the drive hoisting green balloons and singing Irish songs.

On the day of her departure from Ireland, Katherine left her parents James and Elizabeth Power, her sister, Mary, and her brother, Matthew. Two little brothers had died in early childhood before Katherine’s birth at Waterford on April 27, 1914. She was given the name Katherine and unofficially was known as “Kitty”, a common name for all the “Catherines” in Ireland. Katherine’s education began at an early age at St. Otteran School, Waterford, where for ten years she was taught by the sisters of Mercy.

Katherine treasured her roots in Ireland and her staunch Catholic upbringing. Family stories were quick to come to mind. In her autobiography she relates that she was a “war baby.” Her father left for war (WWI) when she was only four months old. He returned four years later, wounded in both legs. Katherine was very close to both parents. Her mother was a real confidant who felt for sure that this daughter would always be with her. Yet, Katherine had frequently shared with her mother her desire to be a Sister. Then one day in Confession, she told the Dominican Prior of her long, cherished desire to become a Sister. He encouraged her and informed her that Sisters Edith and Coletta had been there just the previous day. The priest gave her their mailing address in Dublin. She lost no time in contacting them. Four months later she was prepared “to leave all” and come to the great unknown – America.

Katherine became a member of the first class of Aspirants. She attended Marywood Academy High School from which she graduated in 1933. As a postulant, she was sent to St. Joseph, Bay City to teach the first grade. On the long-awaited day for the reception of the habit, August 21, 1934, she received the name of Sister Terence of the Holy Ghost. In 1967 she returned to the use of her baptismal name. Sister Katherine was a member of a class of nineteen, six of whom had been Aspirants with her. They were known as the “lovely girls” – a moniker given to the group by the prioress, Mother Eveline Mackey who always held a special fondness in her heart for the young women who had come to join the community from Ireland and Germany.

After profession in 1936 the then Sister Terence was missioned at St. Alphonsus, Grand Rapids for one year. Her next nine years were spent in Santa Cruz and Penasco, New Mexico. In 1946 she returned to Michigan. Until 1978 she taught at the following places: St. Thomas, Blessed Sacrament, and St. Alphonsus in Grand Rapids; St. Alfred, Taylor; St. Gregory, Hart; St. Michael, Maple Grove; St. Mary Magdalen, Melvindale; Sacred Heart, Mt. Pleasant; St. Casimir and St. Mary, Saginaw; and St. Joseph, Bay City. All of Sister Katherine’s teaching was on the early elementary level. She enjoyed teaching very much and her students reciprocated her love for them by their own deep affection for her. She especially enjoyed preparing the young ones for the Sacraments of Reconciliation and Holy Eucharist. In 1978 she returned to St. Thomas, Grand Rapids, where she remained for eleven years, first as a Title I teacher and then as a school office aide.

In 1988 Sr. Katherine resided at Marywood for a brief time. Then in November, she moved to Aquinata Hall for reasons of health. For many years, along with her teaching apostolate, Sr. Katherine took great pleasure in visiting the sick and elderly; it was not surprising that she joined the Pastoral Ministry Team at Aquinata Hall. By her kind, loving and compassionate disposition she brought comfort to the sick and enhanced community living. She lived up to her favorite saying, “Do unto others as you would have them do unto you.”

Although Sister Katherine was happy as a Grand Rapids Dominican and in her ministry, the dear ones she left behind in Ireland were frequently in her thoughts. In 1948, after nineteen years in the U.S., she was able to make her first home visit. World War II was over and travel was safer than it had been in many years. During that visit, she was delighted to learn that her first cousin, Catherine Cleary, had joined the Good Shepherd Community in Belfast, and like her, wore a white habit and black veil. Whenever Sister Katherine went home for a visit to her family, this cousin was always on her list of visitors. In 1985, at the time of her Golden Jubilee, it was a great joy for Sr. Katherine to welcome family from Ireland to her home here in the United States for the first time. Seven members of her immediate family were able to be with her for the occasion. Father Cusack, then the Pastor at St. Thomas Parish and the generous people there, left nothing undone to make a grand celebration possible.

And we, her community, are grateful to God for her grace and courage. From the moment she left Ireland from the docks of Cork to the moment she left this world, she has been blessing to the Grand Rapids Dominicans by her beautiful and unselfish life. May the angels lead her to Paradise this day!

Sister Katherine is survived by her brother Matthew Power of Dublin, Ireland; nieces, nephews, many friends and Sisters in our Dominican Community.

Entered eternal life on December 8, 2007 at the age of 93 after 73 years of religious life

We commend Sister Katherine to your prayers.