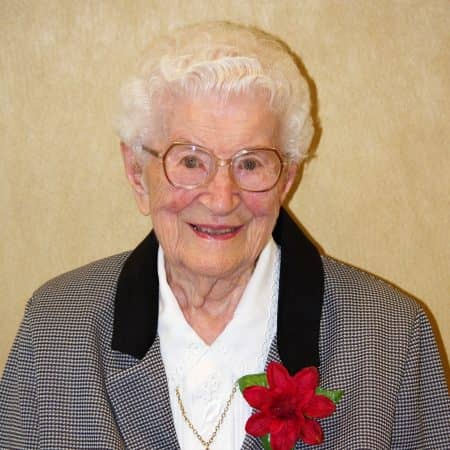 “Happy are those who have died in the Lord; let them rest from their labors for their good deeds go with them.” (Rev 14:13).

“As far as I can think back I had always wanted to be a Sister. My favorite game was playing missionary with all the dolls we could gather. Many a gypsum doll fell victim to our endeavors by being exposed to the inclemency of the weather.” For Sister Juliana the paths to religious life and life as a missionary were neither straight nor simple. Plans to join three other religious congregations were abandoned before Juliana joined her sister Elizabeth as an aspirant at Marywood. There followed many fruitful years of teaching and administration before Juliana found her role as a missionary in her parents’ homeland of Hungary after the fall of the Iron Curtain.

The oldest of eleven children of John and Juliana Kulcsar Barilla, Juliana was born in Grayson, Saskatchewan, Canada, on June 21, 1911. Of the eight girls and three boys in the family, five daughters entered religious life: two became Sisters of Social Service, and three became Grand Rapids Dominicans, including Sister Stephen who entered in 1938 and died on March 27, 1971 as the result of an automobile accident as she was returning to her parents’ home in Esterhazy.

Both parents had been born in Hungary and immigrated to Canada’s western prairie when they were children. The family brought a strong faith to this new land, as well as a determination to preserve the language and culture of their native Hungary. The vast distances of the Canadian prairie and the remote locations of homesteads meant that the religious education of the children rested in the hands of the parents, as did the maintenance of their Hungarian culture.

Even before attending school, Juliana was taught to speak, read and write Hungarian at home. Her early years of schooling were in public settings so their mother taught her children the catechism in the evenings around the kitchen table. While Catholic schools were few and far between, her parents wanted that opportunity for her, so at the age of eight, she was enrolled in a boarding school staffed by the Carmelite Sisters. After the closing of this school, she went to another boarding school – this one staffed by the Ursuline Sisters. Eventually, Juliana attended St. Henry School in Melville, Saskatchewan staffed by our Dominican Sisters, and that is how she eventually became an aspirant at Marywood. Before this, however, Juliana had spent one year with the Sisters of Social Service and seriously considered entering two other religious congregations!

It was Marywood which would win her heart and where she found her home, becoming a member of that unique class dubbed “the lovely girls” by Mother Eveline Mackey. She retained her baptismal name of Juliana with the title “of the Blessed Sacrament” at her Reception on August 21, 1934. She made her final vows on August 24, 1939.

Sister Juliana was a gifted, practical person who always had time for others and their concerns. She served dual roles in administration and teaching for twenty-one of her thirty-five years in the classroom. Her assignments included: SS. Peter & Paul, Saginaw (different intervals); St. Alphonsus, Grand Rapids; St. Mary, New Salem; Santa Cruz, New Mexico; St. Joseph, Bay City; St. Joseph, East Tawas; St. John, Essexville; and Holy Trinity, Alpine. In addition to her classroom teaching, she taught and/or supervised CCD classes for almost fifty years. She was much loved by her pupils, their parents and the faculty wherever she served.

From 1971 to1980, Sister Juliana lived at home in Esterhazy, Saskatchewan to care for her aging parents. In response to a query about her daily activities, Sr. Juliana wrote: “I wash, iron, cook, bake, and do all the shopping. In the spring, I put in the garden and take care of it. . . I look after all the monthly payment of bills.” Further reading of her letter reveals that she also was a lector at Mass, leader and preacher at the Catholic Women’s League, participant in Lenten programs on social justice, leader in interfaith Bible study, teacher in parish CCD programs and sacramental preparation, and listener, counselor and prayerful presence to many who just came to the door seeking advice or comfort. And she sang in the church choir!

When she returned to Marywood in 1980, she was asked to be the Marywood executive housekeeper; however, her activities were not limited to the Marywood house. Each week she gave an afternoon to be present at Casa de la Paz, a transitional home for mothers and children. Her gentleness and understanding brought much comfort and help to this Hispanic community.

There was still one heart’s desire that had not been fulfilled – that of missionary. In her eighty-fourth year, Sister Juliana and her sister Elizabeth responded to the call to go to Hungary to help those who had been persecuted for their faith during the forty-five years of Communist regime. From their cousins in Hungary, they learned about the burnings of Bibles and prayer books, of the repression of religious houses and the need for Christians to practice their faith in furtive underground operations. For three years, Sisters Juliana and Elizabeth taught seminarians and others at St. Athanasius Theological Institute and then at the request of the Sisters of St. Basil, they spent another year teaching the novices about the development of the Church since Vatican Council II, of which the Hungarians had little knowledge. At the end of this tenure, the superior wrote: “Your calm and prayerful presence, your ability to speak with confidence of the Good Lord with your sparkling eyes, your very good sense of humor gave support and consolation to our Sisters at a difficult time. We shall be ever grateful for this.”

And we are ever grateful for Sister Juliana in her calm and gentle ways. She has been a true blessing to us. Her rich and dedicated life has enriched ours. May she now experience God’s love, peace, and gentleness for all eternity.

We commend Sister Juliana to your prayers.