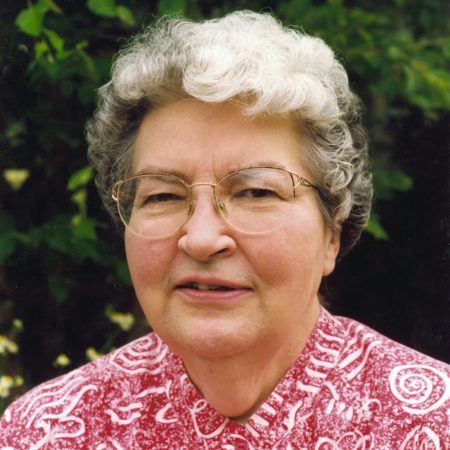 “You are a child of the universe -no less than the seas and the stars. You have a right to be here.”

This excerpt from the “Desiderata” by Max Ehrmann, was a favorite of Sister Judith Ann who believed each and every person was indeed a “child of the universe” with the “right to be here.” Through a lifetime of helping those most in need of this message, she herself was “no less than the seas and the stars,” and, in fact, was so much more.

Born on September 19, 1935, Judith was the fifth of eight children of Stanley J. Barber, Sr. and Mary Edith (Radigan) Barber. Stanley Jr., (Jay), Robert (Bob), William (Bill) and Kathleen, were the older siblings. Following Judith’s birth, three more siblings joined the family, namely, Andrea, Paul and Rosemary. When Judy (as she was known to the family), was nine years old, their mother lost her eyesight – suddenly and completely. Everyone in the family coped as best they could, and perhaps it was this very calamity that bolstered Judy’s compassion, resourcefulness, courage, ingenuity, creativity and common sense. Hard work and a lively sense of humor carried her through many trials in her life.

Judith attended St. John’s School in Essexville, Michigan through her grade and high school years. She loved singing alto in the choir and also enjoyed fishing in the irrigation channels of Essexville, locally referred to as the “Dredge Cuts.” Playing softball and riding her bicycle were additional activities which the young Judy enjoyed with her siblings and neighborhood friends. From an early age, Judy and her siblings knew the meaning of hard work. Judy babysat, shared a paper route with her sister Kathleen and worked at the now defunct Essexville Colonial Theater. She also worked for a time in the customer complaint department at the Bay City Sears store. All of these events prepared Judy for what would follow.

After high school, Judy studied at Aquinas College in Grand Rapids where she was the co-editor of the yearbook and worked part-time in the Office of the Registrar. Judy entered the Dominican Sisters in 1958. At the time of her Silver Jubilee (1984), she wrote that she was inspired by “some very wise and deeply profound Dominican men and women.” At this time too she recalled the beauty of the liturgy, especially Gregorian chant which she said lifted her outside of herself and enabled her to put up with some of the more puzzling customs of religious life.

A few years after her entry into the Congregation, Vatican Council II closed and the subsequent reforms in religious life appealed to Sister Judith, (the demise of chant not withstanding). She relinquished the religious name given to her at the time of her Reception (Sister Thomas Jude) as well as the habit, preferring to dress in modest and simple attire of ordinary lay women of the day.

After two years teaching junior high school, Sister Judith returned to the Office of the Registrar to help Sister Blandina in that ministry which was expanding with the growth of the college. After five years successfully doing this work, Sister Judith went to the University of Michigan where she earned a Master’s degree in Higher Education Administration. By then, Sister Blandina was ready to retire and Sister Judith became the Registrar. Administration was clearly one of Sister Judith’s gifts and following her years as Registrar at Aquinas she spent one year assisting at Marywood and then became the Administrator of the Marywood House for the next five years.

After that, Sister Judith earned a Master’s Degree in Clinical Psychology at Western Michigan University and received her license as a social worker in the State of Michigan in 1984. These competencies served her well in her next ministry at the Salvation Army Booth Services. For twenty-two years at Booth, Sister Judith served as counselor and advocate for unwed mothers and their families, earning an award for her exemplary service in 1997. As well, untold numbers of persons suffering from poverty, addictions, mental instability and/or homelessness benefited from Sister Judith’s skill and compassion. She turned no one away and often worked long hours into the night and on weekends.

Physical challenges including the loss of an eye, led to Sister Judith’s retirement from Booth Services in 2003, but not from an active role in helping others. Sister Judith continued serving through volunteer work at Marywood and St. Thomas Parish. She relished helping her nieces and nephews learn the joys of gardening at her sister Rosemary’s home in Cedar Springs. Of course, the produce was all gift to whomever could benefit from fresh vegetables – be they clients at Booth Services, family members or anyone needing food.

Sister Judith touched many lives through the work of her hands, the brilliance of her mind and the love in her heart. She will be greatly missed even as she lives on in the hearts of those who knew her. In her work and in her life she saw every manner of human misery, yet she did not give in to hopelessness or despair. Her faith was strong, even feisty at times. In spite of a fair amount of evidence to the contrary, she believed along with the poet of the Desiderata: “And whether or not it is clear to you, no doubt the universe is unfolding as it should.”

To family and friends alike, Sister Judith was the “go to” person. Never judging, always finding a way, Sister Judith will live on in the hearts of the countless people she touched with her goodness, generosity and love.

Sister Judith Ann is survived by her sisters: Kathleen (Thomas) Casaletto and Rosemary Steers (†John) of Grand Rapids and Andrea (Richard) Sass of Pinconning, MI; her brother: Paul (Donna) of Bay City, sister-in-law Kathleen Barber of S. Lyon, MI; nieces and nephews, many friends and members of her Dominican community.

Entered eternal life on November 3, 2018 at the age of 83 after 59 years of religious life

We commend Sister Judith Ann to your prayers.

Pray for peaceful resolution to conflicts

A counselor at the Salvation Army for many years, the organization recognized Sister Judith’s ministry at her retirement party.

Working as a registrar’s assistant at Aquinas College in 1967. Sister Judith ann was still going by her religious name of Sister Thomas Jude at the time