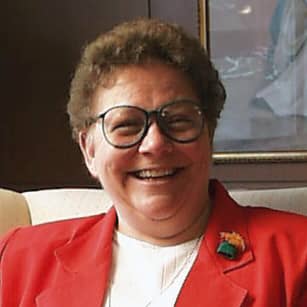 Judith Marie Bloch, the second of four children, was born on August 5, 1948 to Edward Jerome and Elizabeth Marshall Bloch. Early in life the name Jude became a good fit and the two words Jude Bloch fit her person perfectly; Jude was not one for embellishments or fancy extras. She lived life with a forthright simplicity, gentle humor and keen insight.

During two years at the House of Studies she completed her degree at Aquinas College and began teaching at St. Joseph Parish School in West Branch, Michigan. For the next twelve years Jude loved teaching children throughout parishes in Michigan. She taught grades 2 – 4 for five years at Blessed Sacrament in Grand Rapids, grade 4 one year at Our Lady of Grace in Dearborn Heights, and taught one year at Holy Rosary Academy in the pre-school Montessori program. Teaching grades four and five at St. Paul the Apostle in Grand Rapids completed her teaching career in the elementary grades. Wherever Jude taught, the students benefited from her warmth, humor and creativity and the teaching staff and parents had an engaging and nurturing colleague who enhanced the total learning environment of the school.

Yearning to pursue her artistic side, Jude applied for and completed a degree in Fine Arts with an emphasis on graphic design and advertising from Grand Valley State University. This was followed by twelve years in fields that utilized her skills in public relations, graphic arts, design, fund development and marketing. Over those years West Michigan Gleaners, Diocesan Publications, St. Mary Star of the Sea Parish in Jackson, Michigan and MRC Industries, Inc. in Kalamazoo (a non-profit employment service for persons with disabilities) benefited not only from her skills, but also from keen insight and gifted ability to foster a caring community among her peers in the workplace.

After replenishing her spirit with a sabbatical experience at Watermill, New York in 2000, Jude completed Clinical Pastoral Education (CPE) in the Pine Rest program along with the Spiritual Direction program at Dominican Center. This prepared her to launch out into hospital chaplaincy and hospice care, yet another ministry that used the best of her gifts. In 2004 she was hired as a part-time chaplain for Clark Retirement Community, continuing until failing health no longer allowed her to continue her work. There she facilitated worship services; led Bible study and small group activities; and offered spiritual companioning with residents. Jude demonstrated special talents in creating worship experiences for those with dementia and Alzheimer’s disease. Many of the residents or their families requested that Jude preside at their funeral services. She took great care in writing memory pieces about residents after their deaths. Jude’s abiding faith and deep insight motivated her attentive care for all.

During Holy Week of 2006 and again in May 2008, Jude along with several other Sisters, Associates and volunteers traveled to New Orleans to help with the clean-up after Hurricane Katrina devastated the area. The work was both physically demanding by way of cleaning up garbage and muck, painting and calking, and emotionally draining as the realization of bureaucratic indifference became more and more evident. Ever the public relations person, Jude soon published a pictorial account of the first trip, Holy Week in New Orleans and made the injustice known through media outlets. The second trip was funded by a huge sale of material collected from many parishes and individuals that filled the ground floor of Dominican Center in August of 2007, another brainchild of Jude. More than $7,000 was raised.

The fine arts were always close to Jude’s heart and she became a member of the board of the Dominican Institute for the Arts in 2004. Her art work has been shown at the Dominican Center at Marywood Gallery as well as other venues.

Jude brought wonderful creative energy to congregational events from serving as Area co-coordinator, to spearheading the For Your Illumination (FYI) effort and playing a major role to produce A Peace in the Woods – a Choreopoem depicting the history of the Congregation. Along with all of this Jude was constant with observing and blessing the life of her beloved Bloch family. Family reunions, family Christmas parties, pierogi making and memory sharing, and many other connections recognized the beauty of each family member and nurtured their close bond.

Whatever Jude did: teaching and public relations, design and pastoral care, gardening and wrapping presents – she threw her whole heart into it. Joy marked her smile, her words and her warmth. She faithfully heard and lived Jesus’ words “I have come that you may have life and have it to the full.” On Thursday, November 21, 2013 Jude joined her loved ones along with the great cloud of witnesses, friends of God and prophets, free of pain and complete in joy.

Solemn Profession
to simply, gladly
give a lifetime
is to be held closely
(as moist clay)
by creation-stained
godly hands.
Jude Bloch, OP

Sister Jude is survived by her sisters Rosemary Bundy and Patricia (Bill) Bowers of Grand Rapids and her brother Edward “Mick” (Sandy) Bloch of Cary, NC; nieces and nephews, many friends and members of her Dominican community.

We commend Sister Jude to your prayers.