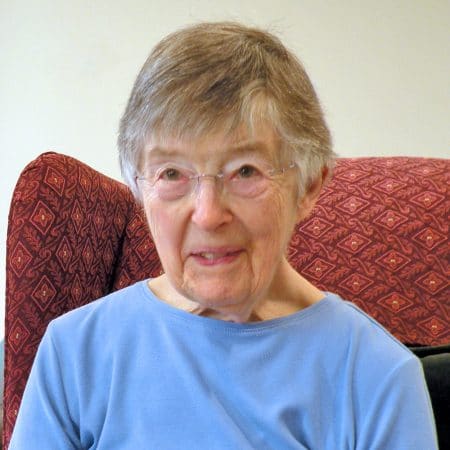 My life began on March 19, 1932, the oldest of six children given to William and Blanche Mead Schafer. My maternal Grandmother walked several miles over snowdrifts to help my mother. The next day, Sunday, Grandma and Grandpa Schafer took me to St. Philomena Church, Beal City, to have me baptized Mary Agnes. It was the custom to have the child baptized on the first Sunday after its birth. I was born on Saturday.

I watched my sister and four brothers grow up. One Sunday when I was very small, I noticed several things walk up the aisle in church. When we got out to the car after Mass, my first question was “What were those things?” They were Sisters. From then on, I was going to be one of them. As children, my siblings and I planted a lot of seeds in the garden. We always wondered how that tiny carrot seed knew it was to be a big orange carrot. What a mystery! When I got older, I became the hired person. I drove the tractor and prepared fields for the planting of seeds, rode the combine, and helped make hay. The cows even let me milk them.

I left home when I was a junior in high school to be an aspirant at Marywood. I graduated in June of 1951 and entered the community that same month and started college at Aquinas. I received the white Dominican habit on January 31. I made First Profession on February 2, 1953, and began teaching third and fourth grades at St. Anthony, Grand Rapids, on February 6. The rest of my ministry days were spent teaching.

I returned to the Motherhouse in July of 2009. I have been blessed during these years with time to do some ESL adult tutoring, taking some classes, praying, and making new friends.

Pray for peace and justice for all

Sister Josine was a hospitality coordinator for the Word ESL program, a ministry of the Dominican Sisters~Grand Rapids.

Sister Josine with a Homework Assistance Skill Development student, a program of the WORD Ministry.

Sister Josine with one of her Word~ESL students.