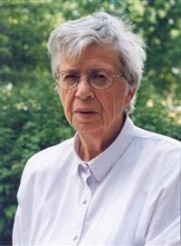 “Come. You have my Father’s blessing! Inherit the kingdom prepared for you from the creation of the world. I assure you, as often as you did it for one of my least sisters and brothers, you did it for me.” Matthew 25:34,40

In a lovely account that Sister Jordan Marie shared with many Sisters describing her dear Mother’s death that occurred just before Christmas in 1969 she wrote, “She died as she lived – a very gentle, loving and simple person.” Well does this describe Sister Jordan Marie whose favorite saying was from our Rule of St. Augustine, “The less the servants of God require, the better it becomes them.”

The life of this good and humble woman began in Chicago, Illinois on January 11, 1916 when she became the only child born to Louis and Emma Hirth Homolka. At her Baptism at St. Raphael Parish in Chicago on January 16 she received the name of Emily Theresa. The family moved to a farm in Chesaning, Michigan before Emily was of school age. With “tongue in cheek” Sister Jordan Marie in her autobiography states that her education prior to entering our Community was in the one room Robinson School at Chesaning, and that after passing the county exam in grade seven in Saginaw, she entered Our Lady of Perpetual Help High School in Chesaning where again she was in a one room school! With gratitude she mentioned Sister Jordan Ruhl who prepared her for First Holy Communion, and she lovingly recalled Sisters making it a point each Sunday to have some contact with her or her parents. In high school her teachers, Mother Victor Flannery and Sister Casper Henze, were important people in her life.

Her dear father and mother meant ever so much to Emily. She called her father her “hero” and stated that she was his “hired man” in the days when there were no tractors or automation. Back in the Depression days life was difficult and she mentioned how they worked constantly to survive and pay the mortgage on the farm. And yet when Emily wanted to join our Community her parents made the sacrifice and God blessed them and herself.

In 1933 prior to Emily’s entrance to our Community, Father A. Studer, her Pastor, wrote a letter of recommendation, the chief points being: that she had just finished the high school course with honors; that she had an excellent character; that she was a daily Communicant since her First Holy Communion; and that she had a constant intention to enter for several years.

It was on September 8, 1933 that Emily came to Marywood to enter the Novitiate under Sister Jerome Smithers’ direction. On August 21, 1934 she received the Dominican habit and the name of Sister Jordan Marie of the Holy Family. Two years later she made her First Profession of Vows to Mother Eveline Mackey. She was a member of “the lovely class of girls” who were not only lovely but also persevering as they were a class of nineteen at Reception, and First and Final Professions.

For over fifty years Sister Jordan Marie was involved in high school education and her expertise was primarily business education and librarian. Sister’s assignments took her to St. Joseph, East Tawas; SS. Peter and Paul and St. Joseph, Saginaw; Sacred Heart, Mt. Pleasant; St. Mary, Muskegon; Catholic Central, Alpena; and St. John, Essexville. At three of these places she spent several years: eleven at Mt. Pleasant; seventeen at CC, Alpena; and thirty-four at St. Joseph, Saginaw. For a person who did not find her early days in the classroom easy, she left a magnificent imprint and heritage wherever she went.

Her many long, dedicated, and fruitful years at St. Joseph, Saginaw were without doubt her most outstanding years. In 1969 she began there as the high school librarian and as the structure of the school changed to respond to the needs of those being served, she was involved in Adult Education, Alternative Education, Tutoring; then a mixture of Tutoring and Social Work, and from 1990 on she did Volunteer Service Work wherever needed.

Sister had a life long empathy for all with whom she was associated, but her years at St. Joseph were special. How true the words of the psalmist, “The Lord hears the cry of the poor,” (Ps 34) with people like Sister Jordan Marie and her co-worker Sister Thomas Edward Kennedy and others ministering to them. The challenges at St. Joseph, which had become “Inner City” were many, and the Sisters engaged in new ministries to meet them.

The following written by the Convent Annalist at St. Joseph, Saginaw, in January 1974 depicts Sister Jordan Marie well, and not only there but in her daily living wherever she was. She wrote: “The Birth of a New Year speaks of time. The one woman in our house who has time for everything is Jordie. Pressures gently dissolve in her matter of fact – business as usual – blushingly humorous way. Jordie brought dear Sam to our dinner table followed by the return to his County Home. A royal tour of the Hospital, St. Francis Home for Children, and St. Francis Home of the Aged characterized Sister Jordan Marie’s way of bringing joy to many people. She has time for a ride, walk the dog, attend a concert, visit hospitals weekly, chauffeur the young and old, keep a daily diary, and be present at whatever is happening; party or program, wedding or funeral. In her, all of this beautifully does not conflict with her primary responsibility at St. Joe’s: teaching people 16-60, morning and evenings in the Adult Education Program.”

Sister Jordan Marie’s labors of love did not go on unobserved. In January 1985 she and Sister Thomas Edward were presented with the Saginaw LIFE Award (Liberties from Injustices and Furthers Equality) in recognition of their efforts to promote mutual understanding among people of different backgrounds. St. Joseph Parish, too, in December 1988 honored both herself and Sister Thomas Edward for their continued ministries.

In a brief recent biographical sketch Sister Jordan Marie wrote, “Most important to me is my association with great women in our Community. They gave me opportunities that challenged me to growth in prayer, a desire to work harder, and obtain a freedom with the Lord in my life. My life in the Dominican Community was a happy one. Many Sisters were real “sisters” to me. I loved every Sister I lived with in community life, and as I look back, my religious life has been joy filled. God blessed me.”

And we your Sisters love you, too, Sister Jordan Marie, and our love goes with you.

We commend Sister Jordan Marie to your prayers.