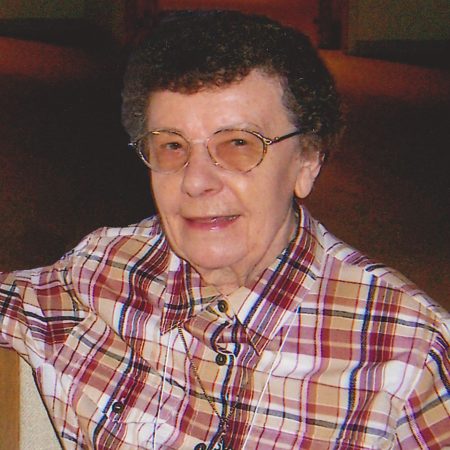 Born in Saginaw June 11, 1928, Dolores Theresa Mary was the second child of John and Theresa (Arciszewski) Kusba. Surrounded by two brothers, one older and one younger, she learned the meaning of both protection and defense. She reports learning to defend herself early on and joining the boys in their outdoor sports, especially baseball. Her early love for sports, her competitive spirit in games, her independent spirit and strong mindedness stayed with her throughout her long life of teaching and living in community.

Her parents were loyal to devotions of their Catholic faith and often prayed the rosary. These early religious experiences inspired her to become a Sister when she was still young. She met the Dominican Sisters in grade school at St. Rita’s in Saginaw and furthered her experience with them at St. Joseph’s School High School.

When the call to religious life grew strong, she chose the Grand Rapids Dominicans even though her two aunts, who were in the Felician Order, thought she should join them. She entered the community at Marywood September 7, 1947 and at reception took her parents’ names, becoming Sister John Therese of the Blessed Sacrament.

Sister John Therese loved the mountains and life in New Mexico and treasured the opportunity to work with children from languages and cultures other than her own. She also enjoyed seeing the country between New Mexico and Michigan and often chose to make the drive rather than fly when it was time to return to Michigan for summer programs.

She earned a BS in Education from Aquinas College and an MA in Religious Education from the Aquinas Institute of Religious Studies. She furthered her education and expertise in teaching through additional summer study at St. Scholastica in Duluth, Minnesota and at the University of Notre Dame, Indiana. She also took advantage of programs in education through De Paul University in Chicago and Michigan State University in East Lansing.

Sister John Therese enjoyed travel and reading, working crossword puzzles, and watching sports, especially baseball and football. Her enthusiasm for football, in particular, was known to evoke her advice to the coaches as she watched from the sidelines of her living room television. She vacationed in the Upper Peninsula of Michigan where she relished the beauty and spaciousness of the area. During the summer of her Silver Jubilee she joined four other Sisters she had entered with to drive to Washington D.C. to visit Fr. Charles Wilson, who was the former chaplain at Marywood during her formative years. She also took advantage of the opportunity to tour the Canadian Catholic shrines with her classmates during this time.

At the time of her Silver Jubilee she wrote: “In my Dominican vocation I find a great sense of community in sharing our lives, in being open to the world, in celebrating the goodness of God’s creation. Above all we are encouraged … to develop the talents and gifts God has given to us.” She was encouraged by the Scripture passage from Hebrews 11:1, “Faith is being sure about what we hope for, being convinced about things we do not see.”

Twenty-five years later at the time of her Golden Jubilee, Sister John Therese was living at Aquinata Hall where she had become a resident due to illness. She took comfort in the passage from Ecclesiastes 3:1, “There is a time for everything, and a time for every affair under the heavens.” As long as she was able to do so, Sister John Therese helped out where and when she could, for in her estimation, it was always time to be of service and she was always ready to lend a helping hand. When the use of speech left her, she still communicated eloquently with her eyes and expressions; when mobility impairment limited most forms of work, she contributed to the group by rolling the blessing papers, joining in activities at Marywood Health Center, and loving every aspect of an ice cream social.

Sustained by her life in community, her love for the Word of God in Scripture, her faith in a loving and generous God, Sister John Therese entered her final years at Marywood Health Center. When the time had come for Sister John Therese to begin her new life with God, she died peacefully, surrounded by her loving community.

Sister John Therese is survived by her brother Anthony (Terri) Kusba, nieces, nephews, many friends and a loving community.

We commend Sister John Therese to your prayers.