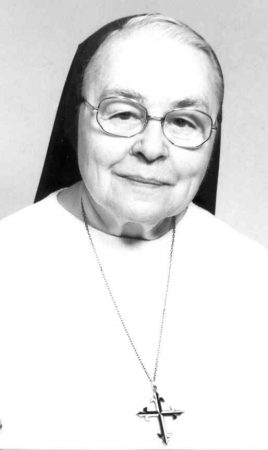 So, Sister John Marie Bronersky revealed a rich thread running through the weave of her life. Frequently she alluded to the place of music in her life—in the fun and games of growing up, in the prayer and work and relaxation of community life, and as her easy chair companion of her golden years. Music had set her feet dancing in youthful pleasure; her mother could well question how such a girl had the makings of a Sister. Music had set her feet firmly on the course of service. Picking raspberries for two cents a quart, every two cents toward the $40.00 needed for a year’s music lessons, lessons that made it possible for her to be the volunteer parish organist! And after that, the choir director! What next?

Theresa Elizabeth was born in Chicago, November 9, 1909, the second child of seven to John and Mary Bubala Bronersky. Baptized in St. Joseph Church on November 16, 1909, her childhood years passed happily. Educated earlier by the Benedictine Sisters, she became acquainted with the Grand Rapids Dominican Sisters after she moved, at the age of twelve, with her family to a farm outside Charlevoix, Michigan. Though she credits Sister Thomas Marie McGee with first posing the vocation question, Theresa had been quietly impressed with the example of Sister Kathleen Bannon. Sister, she said, was “a model for handling children.” Indirectly, subtly and surely the seed was already sown. Already, the soil was fertile in the Bronersky farm home. Transition from urban neighborhood to Northern Michigan fields meant family commitment to new and never-ending chores. The industrious Slovak parents taught their children their responsibility to family, community and Church. So Theresa quite naturally found herself a happy helper of the Sisters before and after school in cleaning, canning, and such now-forgotten jobs as keeping the coalscuttles filled. It was not “all work and no play.” She loved sports, drama and cheerleading. A sampling of after school jobs filled many niches. Charlevoix was Theresa’s world. “We were too poor to travel!” With pride, she could later trace her adult abilities to these earlier experiences.

Whether Theresa recognized any early signs of a vocation, she could only laugh all the way home, when Sister Thomas Marie broached the subject. “Tell your mother I think you’d make a good Sister.” Her mother didn’t laugh. The religious vocations on her side of the family hardly matched the carefree behavior of this daughter. “She told me all my faults,” wrote Sister John Marie. Nevertheless, Mary and John bowed to the mystery, and Theresa brought her willing heart and mind and spirit to Marywood, September 5, 1928. Following a year in which she completed high school, Mother Eveline Mackey, on August 29, 1929, gave her the Dominican habit and the name Sister John Marie of the Holy Cross. Two years later, on September 1, 1931, she made her First Profession, and on September 1, 1937 her Final Profession. “I will sing your praises all the days of my life.”

With her entry, she began a life of diversity to encompass her abilities and energy. The girl born of the Big City and bred in the clean Michigan north wondered often what God had in store, even what crosses were portended in the title of her religious name. “I loved to be active; religious life seemed a sort of quiet way to spend a lifetime. Once I was in, I have become more active, and sometimes too much so.” Her chronology of assignments spanned upper elementary, high school and college education with particular concentration on commercial training, for which she prepared herself diligently earning a Master of Science degree in Business Education. Invariably during earlier years the responsibility for choral and organ service was an expected accompaniment. It was, in fact, an overload of such that took its toll in the paralysis of her vocal cords in 1954. Cross though it was and accepted, it never vanquished her love of good music. “I make up for it,” she wrote, “by saving for concert tickets, Opera, call it MUSIC: I want to be there!”

After forty years of classroom teaching in community schools, Sister’s relentless drive took a fresh focus. With the approval of the community, she joined the staff of the Detroit Institute of Commerce, established to improve the business skills of inner-city African American students. Leaving two years later to become the Executive Secretary of the Detroit Model Neighborhood Community Institute, she was met with a plaintive, “Now, who will push us?” After two more years of challenging service, and at age 65, a government regulation mandated her retirement. Sister John Marie turned homeward.

From 1974 to 1979 as Research Assistant to the Deans’ Council, Sister developed the Office of Institutional Research at Aquinas College. From there, she went to Saginaw, where during the next five years she set up the Chancery Library for the Diocese. During this time Sister balanced her work life with a witness presence at Maplewood Manor. In 1985, she came home to Marywood.

The pace relaxed for common worship, the companionship of old and new friendships, her crafts in the comfort of a cheery room, her ears attuned to the music she could no longer produce. Not so soon! For several years she served as secretary for the Marywood Liturgy Team. Her stiffening, shaking hands gave their final service to Business and to Music.

In 1987 Sister enjoyed a trip to Czechoslovakia with a friend to search for her roots. Her occasional visits to her dwindling family and friends brightened her days. A faithful member of the Holt Group of University of Michigan Women since 1960, she looked forward especially to hosting the annual luncheon meeting at Marywood.

In her declining years at Aquinata Sr. John Marie’s bright eyes was her only contribution to the conversation. Now her voice is lifted in eternal song where music never ends.

Sister John Marie is survived by her sister-in-law Mary Bronersky of Troy, MI; nieces, nephews, many friends and a loving Community.

We commend Sister John Marie to your prayers.