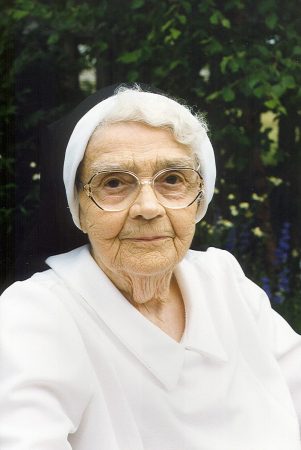 “I have always considered my vocation to the Marywood Dominican Order a great privilege. I appreciate our community spirit, our shared life and shared common prayer.”

Sister John Baptist was born in Beal City on December 31, 1911 the fifth child of a family of ten children – five girls and five boys born to Andrew and Mary Kremstreiter Schafer. At her baptism on January 14, 1912 at St. Philomena Church (St. Joseph the Worker), Beal City she was given the name Leona Anna. In the Schafer home faith in God was the guiding principle and that strong faith was put to the test when their mother died leaving her father with ten small children. Leona was five years old at the time. The father’s efforts in raising the family were truly commendable and caring relatives assisted in many ways.

In 1918Leona began her elementary schooling at St. Joseph the Worker Parish; she continued there through her secondary school years. The Dominican Sisters who taught her all twelve years were a tremendous influence in attracting her to religious life. Her sister, Christine (Sister Madeleine Sophie), entered our Community in 1924 and was also a strong influence for Leona.

In the large Postulancy class under Sister Jerome Smithers’ guidance there was a varied representation of geographical countries that included Ireland and Canada. Leona’s reception was on March 11, 1930 when she was given the name of Sister John Baptist of the Visitation. She made her First Profession of Vows to Mother Eveline Mackey on August 30, 1932 and her Final Profession on August 30, 1938.

As a second-year Novice Sister John Baptist began her educational apostolate which took her to many schools throughout Michigan including: St. Alphonsus and St. Stephen, Grand Rapids; St. Mary, Hannah; St. Mary, Muskegon; St. Anne, Alpena; St. Norbert, Munger; St. Gregory, Hart; St. Michael, Maple Grove; St. Joseph, Wright and St. Joseph, West Branch. For over forty years Sister John Baptist taught at the elementary and junior high level. She was a teaching principal for twenty-one of those years and except for three years was also the Convent Superior.

Retiring from the classroom in 1972 Sister John Baptist became the Directress of the Marywood Laundry – a position she held for the next twenty years. Here again she was known for her hard work, competence and tireless efforts to keep everything running smoothly.

In 1978 Sister John Baptist suffered a bout with cancer. She recovered from this and continued to enjoy many years of work and prayer, of friendship and hobbies. She loved to read, walk, work jigsaw puzzles and crochet afghans. She loved visiting with friends at Aquinata and Marywood and everyone remembers how much she enjoyed pickled baloney! Class get-togethers were always a joyous time of reminiscing about the “good-old” novitiate days. Sister John Baptist was a faithful visitor at Aquinata, particularly the many years her sister, Sister Madeline Sophie, was a patient.

At the time of her Diamond Jubilee she wrote, “I am very much aware of the many reasons I have to be thankful. I am most grateful to God for my faith, my religious vocation, my caring, loving family and the many friends in our Community who contributed so much goodness to my life. I feel privileged to have spent so many years here at Marywood where we are offered so many wonderful opportunities to further our religious commitments.”

We, Grand Rapids Dominicans, are indeed the privileged ones for we have had the gift of 76 years of this gracious woman’s life in our midst. May God accept the fidelity and witness of her beautiful, full life and may the angels now welcome Sister John Baptist into Paradise.

We commend Sister John Baptist to your prayers.