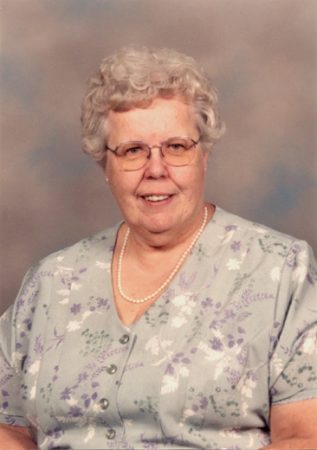 She enjoyed seeing other people relish her cooking and baking – especially noteworthy were her generously sized cinnamon rolls.

Sister JoAnn Boucher was born November 14, 1936 in Muskegon, the third child of Alfred and Irene Wehrle Boucher. She had one brother and three sisters. Early in life she decided to become a Dominican Sister and to minister in the area of food service.

JoAnn attended St. Joseph elementary school and was impressed by the example of the Dominican Sisters, especially Sister Francis Marie. Before completing high school she acted on a suggestion from Mother Victor and entered the Congregation although she was only 16 years old. She asked to be a food service Sister. At reception she took the name of Sister Antonia of the Good Shepherd.

After her profession in 1955 she began her service at St. Mary, Charlevoix. Then for eleven years she worked on the kitchen staff at St. Joseph Seminary, Grand Rapids, forming friendships with many future priests. From there she provided food services to Sisters at St. Catherine, Ravenna and St. John, Essexville.

In 1970 Sister JoAnn had a year at Marywood to study and teach Occupational Therapy at Aquinata Hall. In the following years she served at Aquinata Hall, the House of Studies, Beaver Island, Aquinas College, and Marywood. She received a certificate in Religious Education in 1976 and was certified in Food Service Management by Fontbonne College, St. Louis, MO in 1977. She was a certified member of the Hospital, Institution, and Educational Food Service Society. In 1984 she was elected a member at large of that society. In 1989, along with Sister Dominica Nellett, she co-chaired the spring Conference of the Michigan Dietary Managers Association.

In 1980 Sister JoAnn began work in the public sector as Food Service Supervisor for The Salvation Army Booth Family Services in Grand Rapids. She was later dietary supervisor at Greenview Manor and St. Ann’s Home.

In 1990 Sister JoAnn began 13 years of ministry in Lake County, the poorest county in Michigan. The first seven years were with the Meals Program; that was followed by six years in St. Ann Parish in Baldwin as Pastoral Outreach Associate and Pastoral Associate. One of her favorite ministries was to prepare children to receive their First Holy Communion.

Following her time in Baldwin JoAnn undertook volunteer ministries, including home visiting, at SS. Peter and Paul Parish, Ionia, and food service in Albuquerque, New Mexico where she enjoyed the mild winters. Health concerns brought her back to Grand Rapids in 2008.

The years that followed were difficult from a medical standpoint. Numerous hospitalizations culminated with the amputation of her leg as a last recourse to address persistent infections. Although it was frustrating for JoAnn to be limited in mobility, she brought spirit and life to the Sisters and staff at the Marywood Health Center where she lived the last years of her life. She had a gift for involving everyone in the moment, and every moment had a reason to celebrate. People experienced her presence as a “safe” place. She could calm the most anxious with her warm manner and reassuring words.

All who knew her were touched by her jovial spirit and hospitality. JoAnn loved people and was a dear friend to many. She was a hard worker, noted for her swift completion of any task.  Wherever JoAnn was, there was also a spirit of life, of celebration, of homey aromas from baking bread and simmering soups.

Outside the kitchen she enjoyed reading, crafts and being involved in religious education with the young. She gave away countless articles of hand- made clothing and gifts. She could make a beautiful afghan in record time. For her Golden Jubilee, she gave a hand knitted afghan to each of her classmates. Traveling was another of her pleasures. She visited the Lands of Dominic, the East Coast of the United States, Hawaii and the Caribbean. On her Golden Jubilee she sailed through the Panama Canal in a wheelchair on the deck of the ship.

On March 16, 2013, Sister JoAnn embarked on her last great adventure as she left this world to enjoy life everlasting – without pain, only pure joy.

Sr. JoAnn is survived by her sister Bernadette Boucher of Muskegon; her sister Jeanette Franzek and her brother Father Edward Boucher both of Baldwin, MI; nieces and nephews, many friends and members of her Dominican community.

We commend Sister JoAnn to your prayers

Traveling for the Lands of Dominic Pilgrimage with Sister Bernice Garcia on the right.