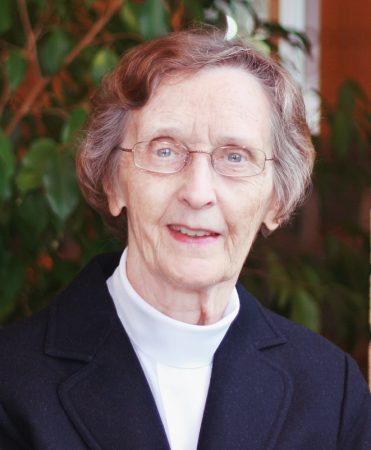 The mystery of time and life as a journey were among Jeanne Marie’s favorite themes for reflection. A favorite quotation was: “We live in the present, we dream of the future, but we learn eternal truths from the past.” Her life bore out the truth of this statement.

Jeanne Marie was born July 31, 1934 in Plymouth, Indiana to Charles and Mildred Flynn Jones. She had one older brother, Charles T., Jr. When she was in the first grade her family moved to Grand Rapids. Here her schooling began with the Dominican Sisters at St. Andrew’s School, and later at Catholic Central where she completed her high school years.

On September 8, 1952 Jeanne Marie entered as a postulant at Marywood receiving the name Sister Ann Michele as a novice. After initial profession in 1954, she taught in elementary grades at Holy Rosary, Bay City; and Holy Trinity, Alpine. After final vows on August 15, 1957, she continued her teaching ministry in the elementary school at St. Mary, Charlevoix, and then St. Mary’s in Carson City where she taught in the high school.

In 1967, Sister Jeanne Marie studied library science at Rosary College, (now Dominican University), in River Forest, Illinois. She received her M.A. in library science in 1968, and served as librarian at Aquinas College until 1972.

Undeterred by language barriers and distance, Sister Jeanne Marie traveled to Riga, Latvia in the summer of 1995 to assist the seminarians in organizing their library. The next year, she, along with Sisters Jean Reimer and Thomasine Bugala, traveled to Novosibirsk, Siberia in Russia to serve the people there who had not yet learned about the changes in the Catholic Church brought about by Vatican Council II. This ministry concluded in 1997.

In 2002, a new phase of her apostolate was the role of director of the Grandville Avenue Neighborhood Library where she followed the founding librarian, Sister Joan Pichette. Here she continued the legacy – providing a safe haven for children to read and study after school hours.

By 2011 Sister Jeanne Marie became a resident at Marywood Health Center, where she gracefully navigated the new territory of memory loss. Eager to be engaged, she often wanted to “go over there” to be present to whatever was underway. A sense of peaceful belonging settled in upon her move to the newly renovated Aquinata Hall in 2013.

Dominican life was a good fit for this talented, quiet Sister. Described by her friends as one who was very organized and as “neat as a pin”, Sister Jeanne Marie loved to study. She also relished opportunities to pray and serve with her Sisters in community. The balance of prayer, study and ministry in community meant the most to her in her Dominican life. As her life in the present has come to a close, we her community members and friends remember a Sister who did “dream of the future” and learn from the “eternal truths of the past” through her study and service. She will be missed.

Sister Jeanne Marie is survived by her brother Charles (Tom) Jones of Washington, DC; many friends and members of her Dominican Community.

We commend Sister Jeanne Marie to your prayers.