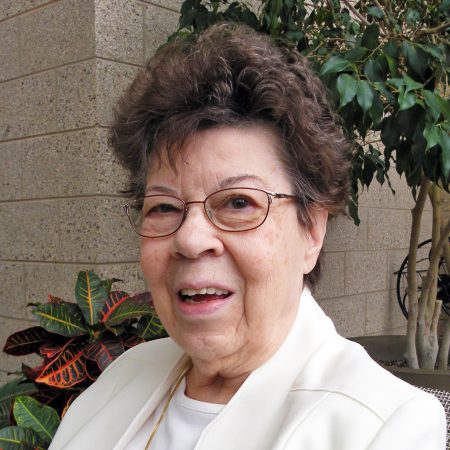 “God is good. He brought me to this holy place.”

Charlene graduated from Mount Mercy Academy in 1958 where she is remembered for her kindness and generous spirit, helping whenever and wherever needed – attributes that remained with her throughout her life. She was named Junior Catholic Daughter of the Year for Grand Rapids by that national organization in 1958. This award was given for her outstanding participation in all Junior Catholic Daughter events which had begun in third grade, culminating in her senior year at Mount Mercy Academy. One recommendation read: “Charlene could always be counted on to serve, not only in the big tasks, but also in the countless little, unsung jobs.” Ever willing and eager to participate in school life, her essay on Class Rings was published in the magazine, “Young America Speaks,” an anthology of Great Lakes States High School essays.

Charlene entered the Grand Rapids Dominican Congregation on September 7, 1958, receiving the name Sister Janet Marie at the time of the reception of the habit. She made her final profession August 15, 1965. For the next nearly forty years, Sr. Janet Marie served the congregation as housekeeper, food service director, and dietary consultant on the Marywood campus as well as other missions.

Sr. Janet Marie relished her years in both housekeeping and in food service. The following places benefited from her competence and kindness: Aquin Hall, where she served as housekeeper for the Dominican Friars teaching at Aquinas College; and in food service at St. Mary Magdalen, Melvindale; St. Joseph’s Seminary, Grand Rapids; SS. Peter and Paul High School, Saginaw; Aquinata Hall and Marywood.

At SS. Peter and Paul High School she stepped in to fill a need to provide hot lunches for students and staff in addition to her assigned responsibility in the convent. There she ably planned, organized, and managed the school’s kitchen staff for the next several years. Fondly known as “Cookie” she always had samples at the ready for starving students and staff! Her gentle ways and quiet manners remained her trademark. All who met her at SS. Peter and Paul were graced by her kindness and gracious ministry.

In 1996 Sister Janet Marie enjoyed a sabbatical time at Water Mill, New York, an experience she deeply appreciated. One of the directors described her as a gleeful presence, willing to help wherever needed, possessing a sensitivity that added to the richness of the program. All who knew her through the years would agree with this observation.

She returned to Marywood as a driver for Sisters in need of transportation and was always willing to do whatever was needed. She soon became the “go to” person for directions and best routes to get to any medical appointment in Grand Rapids.

Sister Janet Marie was a firm believer and participant in continuing education and earned many certificates through workshops, conferences, and course work in her field. In 1981 Sister Janet Marie attended Fontbonne College where she earned a certificate in Food Service as well as a Certificate in Dietary Administration for Food Service Managers. She received a Certificate of Appreciation from Booth Services as a volunteer with the Salvation Army in 1982, and she participated in a Sanitation and Food Service Training Program for Kent County Health Department in 1986. Three certificates were received in 1988, including one from the Dietary Managers Association, an Award for Outstanding Achievement in the Office of Secretary for that group, and a Certificate of Merit as a Dietary Manager. Four years later, she met the qualifications for a Certified Dietary Manager. She also received a certificate from the Holy Cross School of Culinary Art Food Supervisor where she graduated summa cum laude.

Sister Janet was known for her sewing skills and willingness to repair items for those who needed her skills. She stayed in touch with her high school classmates as well as many of the lay people with whom she worked over the years. In her leisure time, Sister Janet Marie enjoyed sewing, crocheting, and reading. She was a steady presence, a competent and caring person whose quiet, unassuming way contributed immensely to the community, both near and far. She will be greatly missed by family, friends, and members of her community.

We commend Sister Janet Marie to your prayers.

Pray for all drivers

Fondly known as “Cookie” Sister Janet Marie always had samples at the ready for starving students and staff!

Charlene graduated from Mount Mercy Academy in 1958 where she is remembered for her kindness and generous spirit, helping whenever and wherever needed – attributes that remained with her throughout her life.

Sister Janet Marie was known for her sewing skills and willingness to repair items for those who needed her skills.

Sister Janet Marie gave thanks during her 60th Jubilee celebration:” I am greatly appreciative to all the people who have brought me to this day – my Brothers and Sisters and most of all my Dominican family. For all the love, support, understanding, and patience, I thank you, Lord, and pray that I continue to serve your people in whatever way you see fit.”

For nearly forty years, Sister Janet Marie served the congregation as housekeeper, food service director, and dietary consultant on the Marywood campus as well as other missions.