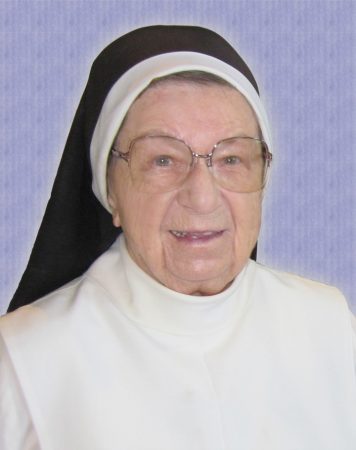 “Knock, and it shall be opened to you.”

In 1921 Vanderbilt, Michigan was as much forestland as furrowed fields. Its population reflected the ethnic and religious character of its neighboring city of Gaylord, predominantly Polish and Catholic. Its scenic beauty had not yet defined its commercial future as resort and sport country, and the settlers were devoted to family wresting a livelihood from their cleared fields. To many, the Promised Land seemed further south with richer, more productive soils. Martha Ann Cherwinski (the future Sister Jane Anthony) was barely four years old when her parents decided to move to Saginaw County.

Both Anthony and Lottie Kujawa Cherwinski were born, grew up and married in Vanderbilt. Like most of their neighbors, they belonged to St. Mary’s Parish in Gaylord, and it was there that they brought their four-day-old firstborn, Martha Ann, to be baptized on June 26, 1921. Martha’s memories of Vanderbilt were few, because of the early move to Saginaw. They lived in Saginaw for two years before buying a farm in nearby Maple Grove Township. Here, Martha would be joined by four brothers and one sister. Martha was only ten years old when her mother died. The little brood of six sorely missed their mother, but none missed her as much as Martha. In due time her father remarried. Martha, however, found this new adjustment difficult to accept, for no one could replace her mother. Even as a ten-year-old, her temperament was characterized by determination and persistence which would be driving forces throughout her life.

Martha’s formal education began in rural Springbrook School before her entry into St. Michael’s High School in Maple Grove. Here she received vocational guidance and support from Father Anthony Bosler and the Dominican Sisters who staffed the school, and who earlier had instructed her in religion. Sister John Berchmans Deegan, who had prepared her for her first holy communion, made a lasting impression on her. It was not, however, her earliest impression of religious life. Before leaving Vanderbilt, her mother had been visited by Sister Marie Anthony Tomaski, and little Martha had been entranced by her graceful white habit. It was not surprising that these early vivid moments were reawakened by her high school teachers as a deciding influence to become a Dominican Sister. With Father Bosler’s help and the Sisters’ encouragement, she steadfastly prepared to enter the Grand Rapids Dominicans.

On September 8, 1940 Mr. Amman, a friend from Chesaning, drove Martha and her parents to Marywood. On August 18, 1941, Mother Euphrasia Sullivan gave her the longed-for white habit and the name Sister Jane Anthony of the Blessed Sacrament. Her name honored her father; her title prefaced the devotion that would support her apostolic life. Following her canonical year of novitiate, she made her First Profession on August 19, 1942, and three years later, having tasted mission life, espoused herself to God forever on August 19, 1945.

The furrows for the next thirty years would be rows of little desks in Michigan schools, as she dedicated herself to Catholic elementary education. Some of those years, she doubled as an administrator, known for her organizational abilities, insight, and a naturally endowed determination to achieve her goals. Among the schools she served were St. Joseph Schools in Muskegon, Wright, Saginaw and East Tawas; St. John School, Essexville; SS Peter and Paul School, Saginaw. Catholic education was an expanding field for her service to God, and she went to ever wider horizons for which she had been prepared.

An avid learner, Sister Jane Anthony followed her B.A. degree from Aquinas College with an M.A. in religious education, and then another Master’s degree in administration from Central Michigan University. After 30 years in elementary education, she was assigned to coordinating and directing CCD classes in several Michigan parishes: St. Michael Parish, Pinconning; St. Frances Cabrini, Vassar; St. Mary, Pinckney and St. Mary Queen of Angels, Swartz Creek. Intermittently she gave a unique service as vice principal and dean of women at the Orchard Lake School of SS. Cyril and Methodius Seminary, a Mecca of her Polish heritage. Because of changes in the administrative structure, Sr. Jane Anthony was only there one year; however, she still found time from her varied duties to set up and administer the Pope John Paul II Center of memorabilia. If this was not entirely her brain child, it certainly was for her a field of dreams.

Earlier in 1976, while attending the Eucharistic Congress in Philadelphia, she had met Cardinal Karol Wojtyla (later to be Pope John Paul II) and was photographed with him. Before leaving Orchard Lake, she was given the opportunity to study the Polish language and culture on summer scholarships at the famed Jugiellonian University in Krakow. With community approval, she applied for and received five successive scholarships. Her travelogue letters attest to her appreciation of these privileged summers.

Like a thread throughout her life she was devoted to the Blessed Sacrament. It brought her joy to prepare classes of First Communicants – a “Jubilee of them,” she once recounted. Another of her joys was the care of the altar for the Eucharist; she welcomed the privilege.

Sister Jane Anthony worked closely with Father Amos Wischmeyer, Pastor of St. Mary’s, Swartz Creek. They invited Bishop Carl Mengeling to join them on many occasions. No wonder it was a surprise and a shock for her to learn that on Sunday January 27, 2008 Father Wischmeyer had died. The transition time held many struggles and disappointments; however, Sister Jane Anthony moved temporarily to Flint before finally moving to Marywood in January 2009.

Because of her strong work ethic, Sister deleted the word “retirement” from her vocabulary. Retirement was a reality she could not accept even when her friends reminded her she need not remain in active ministry. However, she faithfully continued searching for a new ministry until illness necessitated that she stop. In a Christmas letter in 2010 she said, “I’m finished with positions, 28 years were happy but if God plans, I’m willing to enjoy passing on the faith in a simpler manner.”

Sister Jane Anthony celebrated her 70th Jubilee in August, 2011 and was so pleased “to see family and friends who came from distances,” she added “my only regret is that the short time did not allow me to talk or visit more with each of you.” She closes the letter with “Maybe we can all meet again, God Willing! If not here, anticipating Heaven, forever!!!”

On December 16th she willingly answered God’s call to enter a new life of eternal rest, peace and happiness, a well-deserved reward for her years of faithful ministry to God’s people.

We commend Sister Jane Anthony to your prayers.

The class of sisters that Sister Jane Anthony entered with, taken in 1949