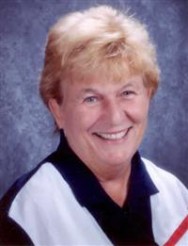 “Dance and sing with MUSIC in God’s heart,” was the theme of Jackie Bennett’s PowerPoint presentation for Area 5’s jubilee celebration in April 2003.

It expresses the bubbling enthusiasm for which she was known throughout her life.

Jacqueline Jean was the youngest child of Albert and Ida Bennett, born April 22, 1934 in Grand Rapids. She had four sisters and one brother, all of who were to predecease her. She attended Holy Name Grade School under the Sisters of Mercy and Catholic Central High School, where she met the Grand Rapids Dominicans. Jackie worked in a dime store after school and in summers.

In her senior year Jackie had a class with Sister Joannes (Nancy) Flumerfelt, whom she described as a “really human person.” She found that the Dominicans were individuals and decided to join the Congregation after graduating in 1952. At reception she became Sister Marie Jean of Our Lady of Lourdes until after Vatican II, when she returned to her baptismal name and was commonly referred to as Sister Jackie.

In 1954 Sister Marie Jean began 25 years of teaching in elementary schools in Beal City, Bay City, Hannah, and St. Paul the Apostle, St. Andrew, and St. Alphonsus, Grand Rapids. Along the way she received her B.A. and Certificate in Theology from Aquinas College; M.A. in Elementary Education from Michigan State University; and License in Workshop Way® from Xavier University, New Orleans. In every parish she taught CCD in order to avoid catering exclusively to pupils in parochial schools.

In 1969 Sister Jackie, with a group of Sisters who worked in several different parishes, moved to Alexander House, one of the first settings for a neighborhood house. They formed bonds of friendship with their neighbors and helped ward off deterioration in the area. There the Mello-D’s came into being and for more than 20 years brought their musical abilities to various publics, playing and singing God’s word. Jackie sang and played bass with the group.

Jackie began serving in 1979 as a Workshop Way® consultant in the Grand Rapids area and beyond. The beyond went west in 1986, when she moved to San Diego, California and brought Workshop Way® to that area. She became noted for spreading the philosophy of WW and spoke at conferences in 17 states, Canada, and Ireland. She was co-author of two books on language arts for middle grades and grade 3. As an ad-hoc professor she taught at Aquinas College, Western Michigan University, Xavier University, San Diego State University, and the University of San Diego.

Everywhere Jackie’s presentations received the highest commendations. After one she received a letter from the director of the Inspiring Strategy Institute praising her “overwhelming joy of, love and appreciation for the art of teaching.” The principal of a school in which she taught wrote of her extraordinary talent, generosity, dedication, and rapport with children and adults. She made everyone feel, “You are special.”

Outside the classroom Jackie used her energy in working for justice for the underdog through Pax Christi, Network, and Groundwork. She enjoyed travel, camping, walking beaches and woods, biking, creative arts and crafts for gift giving, playing cards and eating popcorn. Her faith was deep and she strove always to deepen her prayer life. She remained close to her extended family and her many friends.

In her later life Jackie required surgery and time to recuperate, but her spirits were undaunted. In the year of her golden jubilee she wrote: “My health challenge is affording me the opportunity to choose life. . . . I am learning that whatever is going on in my life is a blessing if I let go and let God. . . . All I need to do is to be aware of the blessings of the NOW, and to acknowledge them with GRATITUDE.”

Jackie had always viewed life as a journey to God. When medical treatments were no longer effective, she looked forward peacefully to reaching her destination. In June 2004 she e-mailed the community that she would return from California to Aquinata Hall. “Feel very much ready to move on and continue to enjoy the journey. God is good . . .. all the time.”

On Thursday morning, July 15, 2004, Jackie heard the words of Jesus “Come unto me, all you who labor and are burdened, and I will give you rest.” Mt 11:28 Rest is not a word we associate with Jackie. We are sure that she is experiencing Eternal Joy.

Sr. Jackie is survived by her sister-in-law, Daghmar Bennett of Conklin, MI; her brothers-in-law Donald O’Hearn of Grand Rapids and Bob Lang of Ada, MI; nieces, nephews, many friends and a loving Community.

We commend Sister Jackie to your prayers.