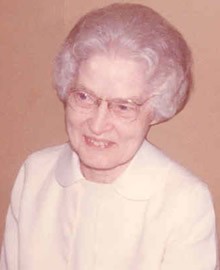 Sister Helen Moans was sixteen when the psalmist words spoken of David were to be actualized in her life, “I have made a covenant with my chosen one” (Psalm 89:4) for at that youthful age she left her Mt. Pleasant home to put herself into God's hands as a future Grand Rapids Dominican.

This future Grand Rapids Dominican, along with her twin sister, was born to Peter and Agnes Moans in Coleman, Michigan on October 21, 1899. Already in the family were a sister and brother. The twins, who were baptized on October 26, 1899 at St. Brigid Church in Midland, were named Nettie and Nellie. They were only nine days old when their dear mother died leaving their father to raise four children. For a couple of years a kind childless couple took Nettie (our future Sister Helen) into their home. Later the father married a Mrs. John (Anna) Davis who had a daughter and son, and they became one happy family.

Sister Helen in her autobiography remarked about her father’s staunch faith and that it was his faith and the respect with which he spoke of nuns and priests that did much to account for her eventual entrance into religious life. About her second mother she had high words of praise for she felt she owed her much for her motherly care and training.

When Sister Helen was seven years of age, the family moved to Mt. Pleasant where she attended the public school. It was at Sacred Heart, Mt. Pleasant that she made her First Holy Communion and was confirmed by the Most Reverend Henry J. Richter in 1910. The seeds of Nettie’s religious vocation that had been nurtured in her beautiful Christian home were recognized by the Assistant Pastor at Mt. Pleasant, who spoke to Nettie about becoming a Sister. The Grand Rapids Dominicans staffed Sacred Heart School, Mt. Pleasant, and it was Sister Agnes Senecal whom Nettie contacted concerning entering the convent.

Nettie became a postulant at St. John’s Home on April 23, 1916 the day before her older sister received the Dominican habit and the name of Sister Agnes Regina. Her twin entered the Sisters of Mercy just a month later. Nettie received the Holy Habit of St. Dominic from Mother Gonsalva Bankstahl on October 28, 1916 and the name of Sister Helen of the Holy Cross. Her twin was given the religious name of Sister Corona. Sister Helen amusingly used to remark that now instead of being Nettie and Nellie, they were now “the Cross and the Crown”. Because of the urgency to staff our schools Sister Helen was not able to make her novitiate year immediately after her Reception, and so she made her First Profession of Vows on August 17, 1920. Mother Benedicta O’Rourke was the Mother General who received her Vows.

For fifty-five years, except for one year of illness, Sister Helen taught in the various schools in Michigan. Some of these included schools in Chesaning, Grand Rapids, Traverse City, Saginaw, Bay City, Gaylord, Alpena, and Muskegon. Sister taught in every grade from the first to the twelfth, but the majority of her years were spent teaching on the high school level.

Seventeen years of Sister’s teaching apostolate were in Muskegon, first at St. Mary and then at the new Catholic Central which opened its doors in 1953. When Catholic Central first began, the Sisters assigned to it lived in the various parish convents and then in their own convent on Fourth Street. In 1966 Catholic Central’s new convent was ready for occupancy, and it was one of the first to have intercommunity living. However, the beautiful spirit of sharing and compatibility among the different religious communities had its beginnings long before this. The Sisters in Muskegon had a long history of sharing cultural, social, and spiritual activities with each other.

When Sister Helen was recently asked what made her Dominican vocation important to her, she listed these: “The recitation of the Office with its beautiful psalms has been an inspiring influence. The sharing life with companions who are striving for the same spiritual goals is very helpful. The importance of study and learning which has always been an essential factor in Dominican life has afforded us many opportunities to become well prepared for our work. The spirit of democracy which is our Dominican inheritance is also stressed in our community.” In an earlier autobiographical sketch, Sister Helen noted that one of the highlights of religious life was the opportunity of spending six summers in the study of Theology and how grateful she was for this and all the many opportunities afforded by her beloved community.

About her own role in the community, Sister Helen had this to day, “My life in the community has been that of the ordinary run of the teaching Sister, hidden and uneventful, but I trust not without fruit before the good God.”

Though Sister Helen’s health was frail, it did not deter her from being where she should be whether it was in the chapel, classroom, at household duties, or community activities. She was always the essence of a gentle, refined and gracious lady who was very neat and proper about her own person and all she did. In fact, some of Sister’s friends lovingly called her “Queen Helen”. As Sister Helen lost every member of her immediate family, it was obvious that the staunch faith that Nettie had so much admired in her dear father was likewise hers.

When Sister Helen terminated her years in the classroom in 1972, she came to the House of Studies and was very much a part of the community there. In January 1983, at her own request she made Aquinata Hall her residence. Here she was able with limited nursing care to remain quite independent.

Sister Helen’s favorite scripture passage was from St. Paul, “Eye has not seen, nor ear heard, nor has it entered into the heart of humanity what things God has prepared for those who love God” (1 Cor 2:9). May Sister Helen now enjoy all the good things her faithful and loving God has prepared for her whose dedicated life and service to God, the Church, and her Dominican community have borne fruit and merited their eternal reward.

Sister Helen is survived by several nieces and nephews and many friends.

We commend Sister Helen to your prayers.