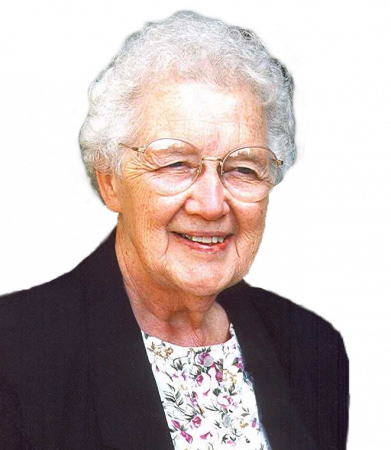 For everything there is a time.

This statement from one of Sister Geraldine’s favorite scripture passages proved true in her life, filled with many turnings at different times.

Jean Marie Fox, born May 10, 1923, was the first of eight children of Emmett and Genevieve Summer Fox. After the joy of her birth, there was a time of sorrow in her family as just one year later, little Emmett was born and died the same day. Then a sister was born, Geraldine Therese, who died before her second birthday. Three brothers and two sisters survived to adulthood. At first the family lived in Irishtown, Michigan but soon moved to Flint, Michigan where her father found work.

Jean Marie attended high school at St. Michael’s in Flint through the tenth grade and then worked as a nurse’s aide at St. Joseph Hospital in Flint. Although she had known Sisters, Servants of the Immaculate Heart of Mary (IHM’s) in her school years and Sisters of St. Joseph at the hospital where she worked, she knew the Dominican Sisters in Grand Rapids through two aunts who were members, Sisters Annabel and Benigna Bollman.

So it was no surprise that when Jean Marie wrote to her aunt, Sister Benigna, to pray for her to help her decide which religious order to enter, the Dominican Sisters in Grand Rapids became the answer to her prayers! For her it was simple “It was just that God called me to be a Dominican.” She entered the Congregation September 8, 1942, and at Reception took the name of her deceased sister, Geraldine, and became known as Sister Geraldine of the Immaculate Conception. This then, was a turning: a time of decision making and commitment.

Sister Geraldine’s initial ministry was in food service, first at Holy Angels, Traverse City and then at St. Mary Magdalen in Melvindale. “I enjoyed the Sisters there. They gave a good example to a fledgling just beginning. My other missions gave me a lot of blessings spiritually and otherwise.” In 1949 Sister Geraldine returned to Marywood. At first she was in charge of the Marywood Academy girls’ dining room. Then for nine years, she supervised the work in the Marywood laundry. There under her watchful eye, postulants and novices spent hours at the mangle and presser and everyone learned the proper way to fold towels.

Between 1959 and 1967 Sister Geraldine returned to the ministry of food service at Blessed Sacrament, Grand Rapids; Our Lady of Grace, Dearborn Heights; the Aquinas College convent; and Sacred Heart, Muskegon Heights. Coming full circle in ministry, Sister Geraldine returned to ministry as a nurse’s aide, a skill which she had developed as a young girl of high school age. For nearly twenty years, Sister Geraldine served the Sisters at Aquinata Hall both as a nurse’s aide and with their personal needs. During many of these years, she resided at 247 Lakeside, a small house known as the Yellow House on the northeast edge of the Marywood campus. Another turning: times for a variety of ministries of a very active and busy nature.

As the time to slow down became apparent, Sister Geraldine exchanged her nursing duties for a desk job. For the next fourteen years, she answered phones and offered hospitality at Marywood and Dominican Center. Her nature was one of cheerful graciousness, making this latest ministry a most suitable form of service for her. During these years, she also volunteered with Second Harvest Gleaners (now Feeding America West Michigan) – an organization that makes excess produce and foods available to people who are hungry. This was a time of slowing down and savoring a more deliberate and relaxed pace of life.

Although not inclined toward academic study, Sister Geraldine took advantage of opportunities to learn through reading, study, workshops and conferences. On a tiny slip of paper among her keepsakes was found a hand written note that read: “The only Certificate that will be mine is the one God Himself will give to me for Eternal life. For this may I say, thank You God” – this was a time of gratitude.

Sister Geraldine’s interests included listening to music. With her lyrical voice, she was a valued member of the choir at Marywood for many years. An avid reader, her favorite Biblical texts were from the Old Testament, specifically Isaiah, Job and Ecclesiastes where she found her favorite passage, “There is a time for everything”.

Ever grateful, Sister Geraldine treasured her friends and all she met through prayer, living and sharing her Dominican vocation. “The things I have been able to give to our Sisters have brought joy to my ministry in community.” And to this, we, her Sisters and friends say – thank you Sister Geraldine, our hearts are filled with gratitude for your love, your life, your time with us.

Sr. Geraldine is survived by nieces and nephews, many friends and members of her Dominican Community.

We commend Sister Geraldine to your prayers