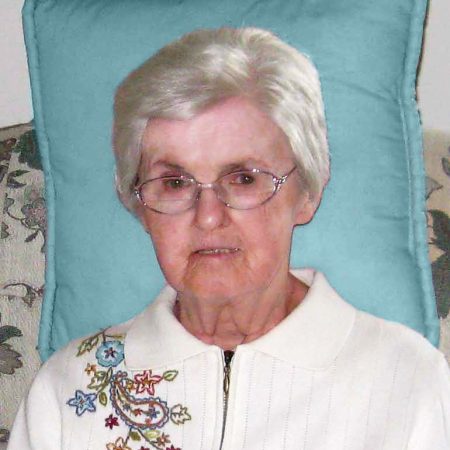 “Sing praise to the Lord with all your heart. Give thanks to God the Father always and for everything in the name of our Lord Jesus Christ.” Ephesians 5:19-20

Geraldine Frances Czolgosz was born in the early hours of All Saints Day, November 1, 1926 in Saginaw, Michigan, and baptized at Queen of the Holy Rosary Parish there. She was the seventh of eleven children born to John and Frances Jurek Czolgosz. Both parents were born in Poland, immigrating to the United States shortly after their marriage. They came with nothing but borrowed money and a strong trust in God.

Although her mother suffered serious illness both before and after Geraldine’s birth, she put her faith in God and gave birth to four more children after Geraldine. Frances referred to her children as the eleven “good apostles.” The family lived with relatives in Saginaw until they were able to buy their own home.

When Geraldine was a year old, the family moved to Bridgeport. Here she enjoyed the companionship of neighborhood children as well as her brothers and sisters. When Geraldine was in seventh grade, the family moved back to Saginaw. High School years were at Saginaw High School from which she graduated in 1945, the first in her family to do so. During her senior year of high school, she took business classes in the morning and worked at Lufkin Rule Manufacturing Company in the afternoon. She was proud of her Saginaw roots and Polish heritage.

Following graduation, Geraldine was employed by the Michigan Bell Telephone Company where she eventually became the assistant supervisor. She also maintained ties with her parish church and was active in the Sodality.

After eight years working for the phone company, Geraldine visited her friend Genevieve Bugala (later Sister Thomasine), who had entered the Dominican Sisters in Grand Rapids. Although she had no intention of joining the congregation, she heeded the suggestion of Fr. Charles Wilson to spend a weekend at Marywood. That experience and the encouragement of her parish priest blossomed in a vocation to religious life. Geraldine entered in June of 1953, receiving the name Sister Hyacinth of Our Lady of Confidence at Reception. Her First Profession took place on February 3, 1955 and her Final Profession on August 15, 1958. Sr. Hyacinth returned to her baptismal name in 1976.

She earned a BA in History and Certificate in Religious Education from Aquinas College, and an MA in Reading from Western Michigan University.

After retiring from teaching in 1988, Sr. Geraldine served St. Andrew School in Grand Rapids as school secretary. Following eight years there, she worked in the finance office at Marywood for another eight years.

Sister Geraldine had a sabbatical year at Manna House of Prayer in Concordia, Kansas which she enjoyed very much. Retirement was not a word in Sister Geraldine’s vocabulary, so a long record of volunteer service began next. After moving to Marywood she served in both the finance office and in human resources for nine years. Following that, Sister Geraldine served as the Marywood House bursar, receptionist and bursar at Marywood Health Center and tutor in the WORD – ESL program until 2014.

Sister Geraldine retained strong connections with her family. In her later years, she enjoyed trips to Arizona in the winter to visit her sister Agnes. Her sisters, nieces and extended family supported her in her final illness with cards, calls, FaceTime visits, and visits in person.

Her interests included reading, especially novels, working puzzles, polka dancing, relaxing, and singing. In her memoirs, she wrote: “Most important in my Dominican vocation is the sharing of prayer, work, and daily living – the close bonding in loving, understanding, helping, and supporting each other.”

Sister Geraldine will be remembered as a strong, yet quiet person who loved life and was ever faithful to God who called her to religious life so many years ago.

We commend Sister Geraldine to your prayers.