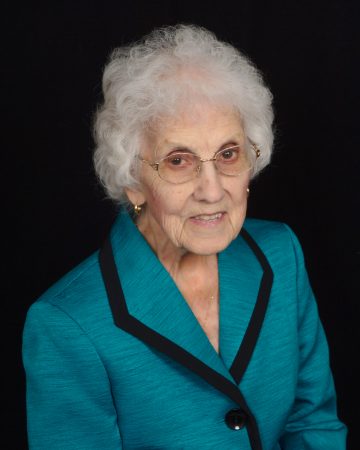 “I believe that the growth I received from the community would not have been had I gone elsewhere or chosen a different way of life.”

Generous and genuine, Sister Genevieve Montreuil served and grew through multiple changes in religious life and ministry for 76 years.

Born April 15, 1916 Marie Bella Gertrude was one of twelve children in a French-Canadian family who lived on a farm near Rosetown, Saskatchewan, Canada. Because Catholic education was a priority in her family and none was available at Rosetown, Bella and her twin Della were sent to board at Catholic academies in Moose Jaw and later in Saskatoon. Life-style and discipline there was old-church and strict. When their father died in 1933, the twins came to Marywood as boarders and aspirants. Both entered the postulancy, but Della soon returned home. Bella found her twin’s departure painful, but remained devoted to her in the trials and illness of her later years.

At her reception, Bella received the name of Sister Marie Genevieve of the Divine Heart (later shortened to Genevieve). She made her first vows to Mother Euphrasia in 1937. A year later she embarked on her first career, teaching, which occupied her for 36 years. She taught grade school in Lake Leelanau, Saginaw, and Munger; and she taught in high schools in Melville, Lake Leelanau and Beaver Island before earning her bachelor’s degree from Aquinas College in 1958 with a major in chemistry. Sister Genevieve continued teaching in high schools in Saginaw, Alpena, Chesaning and Mount Pleasant until 1972. In several assignments she combined the roles of superior and principal. Meanwhile she did graduate work at the University of Detroit and at Fordham University, receiving her M.S. from Boston College.

Her second career began in 1973. Wishing to be near her aging mother in Rosetown, she wrote to Bishop Mahoney, who was looking for a Sister to do marriage tribunal work. She prepared for several months by private study and tutoring, and took over as auditor and secretary for the Diocesan Court. That entailed acting as notary for cases of Pauline Privilege, Privilege of the Faith, and Nullity; working under the Officialis of the regional tribunal in Regina for formal cases; acting as advocate in some cases in her own and other dioceses. In 1976 she continued her tribunal work in Saginaw. There, in addition to working on all aspects of marriage cases, she took on case preparation for the Tribunal’s reconciling ministry to divorced Catholics.

Sister Genevieve’s third career was parish ministry in Saginaw, followed by a return to teaching in Saginaw and Mt. Pleasant. She had felt fulfilled by the other ministries, but “missed the energizing impetus of young Americans.”

During her “retirement” years, Sister Genevieve began her fourth career: volunteer services for the Diocese of Lansing; marriage annulment cases; visiting people who were lonely and poor; acting as a spiritual mentor; and assisting the editor of a publication of homilies and prayers by proofreading and evaluating the homilies “through the ears of the person-in-the-pew.”

In her life in community, Sister Genevieve was known for her buoyancy, compassion, hard work, hearty laughter, and outspokenness combined with sensitivity. Those who lived with her in the days when mantles were part of the religious garb can recall her expertise as a seamstress and her generosity in sharing it with others. When the changes brought about by Vatican II began to be implemented, Genevieve was one who revamped her wardrobe with style and good taste. Never appearing dowdy, she was known as the chic sister. Her leisure interests and skills were varied: crafts, reading, cross-country skiing, sewing, and listening to classical music. Even her science students benefited from her music appreciation when the melodies of Montovani could be heard wafting amidst the beakers and petri dishes of the chemistry lab. But above all, Genevieve loved to study, read and share conversation on topics of substance such as religious life, spirituality and the Church.

She was grateful for the opportunities she was given in education.

While still in her fourth career, Sister Genevieve wrote: “I look forward to a fifth career should the Lord choose to give me one.”

Thoroughly Dominican in temperament and spirit, Sister Genevieve joined the great cloud of Dominican saints on April 20, 2013, where she was surely welcomed into Paradise by all those who loved her in life.

Sister Genevieve is survived by her brother-in-law Eddie Morris of Rosetown, Saskatchewan; nieces and nephews, many friends and members of her Dominican community.

Entered eternal life on April 20, 2013 after 76 years of religious life

We commend Sister Genevieve to your prayers.

Sister Genevieve checking chemicals while she was a Chemistry teacher in Alpena, 1964.

Celebrating her 75th jubilee in 2006 at Marywood.