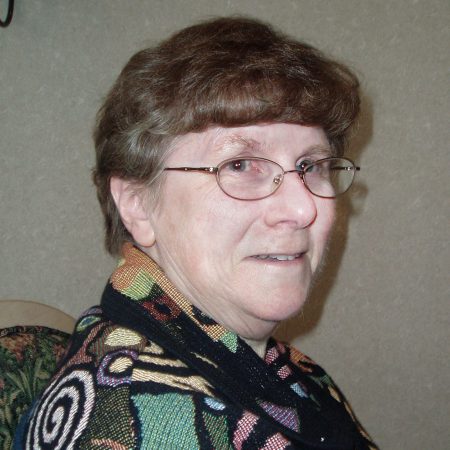 “Sit ye with Mary, stone-still at God's feet, and listen to Him alone.”

Gail Ann Martin was challenged by this quotation from her high school days. She spent a lifetime listening and growing, relishing opportunities to “sit . . . and listen.”

Gail Ann was the eldest of five daughters of Henry and Beatrice Hook Martin. She was born in Detroit July 10, 1939. When she was five years old the family moved to the neighboring suburb of Taylor. In grade school she attended both Edgewood Public School and St. Alfred’s in Taylor where her teachers were Grand Rapids Dominicans. When she was in the eighth grade, Sister Flavian took a group of girls to Marywood to see a play. Young Gail Ann was so impressed, she decided that Marywood was the place for her; that fall she became an aspirant at Marywood Academy.

Then in 1957, Gail Ann returned to Marywood as a postulant. At reception she was given the name Sister Joseph Therese which she kept until returning to her baptismal name after Vatican Council II. She was inspired by her novice directress, Sister Cecile, to “launch out into the deep.” That she did, as she furthered her academic career at Aquinas College, and subsequently became a dedicated teacher and an ardent advocate for people in need.

Sister Gail Ann also taught in New Mexico where she was the principal at San Miguel School, Socorro and St. Mary School, Belen. A bonus of her years in New Mexico was the opportunity to visit historic sites and beautifully scenic places. She loved the picturesque vistas and the fiestas and was enchanted by an opportunity to see the Balloon Festival. She was an advocate for the children wherever she taught or served in administration, realizing at a deep level that a positive relationship between student and teacher was just as important as the transfer of information and content.

Always a woman of compassion, she returned to Michigan and entered new ministries serving people who were poor and disenfranchised. In Detroit she worked with the Open-Door Ministry which serves thousands of people each year providing meals, clothing, medical care, housing services and hope. Then she served the St. Vincent de Paul Society as coordinator of Conference Social Services. While living in Detroit, she also represented the congregation at the Michigan Housing Coalition. Her younger sister describes her as an intelligent, kind and caring person who never hesitated to speak her mind. She likewise seldom hesitated to write about her observations to people with whom she both agreed or disagreed. And she was a very good writer – skillful and competent.

Between 1995 and 2006 (with an interim for a sabbatical year at Blessing Place in LaCombe, Louisiana), Sister Gail Ann entered the public sector as administrator for the Greater Corktown Development Corporation, which provided housing for people with low income. From her office in downtown Detroit she helped people apply for food stamps, identification cards and applications for housing. When necessary, she provided transportation to those who had no means to travel to appointments.

In retirement Sister Gail Ann assisted at Marywood and Marywood Health Center in support services, including sacristy. Her interests included reading, visiting and travel. One memorable trip was with a group of Sisters to visit Greece and Turkey.

She is remembered as an intelligent, sensitive, loving person and a good friend to many. She loved life and laughter. She was grateful to be able to return to the Detroit area to be with her mother as she neared the end of her life. She expressed gratitude again when she was called to move back to Grand Rapids and live on the Marywood Campus. This move was due to an increasing memory loss. Despite this limitation, Sister Gail Ann continued to advocate for the poor. During the last years of her life when dementia made meaningful conversations all but impossible, Sr. Gail Ann greeted everyone with kindness, affection and gratitude.
At the time of her Golden Jubilee, Sister Gail Ann summarized her life of ministry: “Each successive launching, from postulant to professed Sister, from teacher to working with the poor, has brought a deepening of understanding, love and gratitude . . . a realization of my luck in having such a great and supportive family, and a community of wise, socially conscious and grace-filled Dominicans . . . .

Listening, reflecting, expressing her hopes and dreams, growing, serving others – Sister Gail Ann is at rest now, reaping the benefits of a life spent in the service of Love.

We commend Sister Gail Ann to your prayers.

Pray for poor and elderly, especially in inner cities

During her sabbatical at Blessing Place in 2001, Sr. Gail Ann painted a variety of watercolor pieces.

Ingenuity, a Stamp Collection, and a Car in Santa Cruz