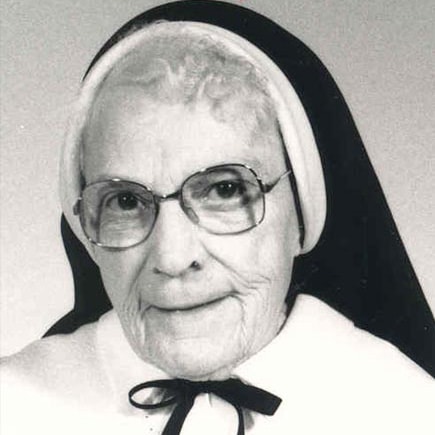 On April 28, 1998, when the good Lord called Catherine to her new heavenly home, Sister could well repeat the words uttered by Simeon at the time of our Lord’s Presentation in the Temple, “Now, Master, you can dismiss your servant in peace” (Luke 2:29).

It was on a February 2, 1908 the day on which the church celebrates the beautiful Feast of the Presentation of the Lord in the Temple that Mrs. Adams presented her dear daughter Catherine to the Lord at Marywood to be a Grand Rapids Dominican.

On the day after Christmas in 1907 Catherine was born to Charles and Margaret Murphy Adams in Shields, Michigan. The Adams family were blessed with six children, three boys and three girls, and of these, Catherine was their first girl and the third oldest. When she received the sacred waters of Baptism at SS. Peter and Paul, Saginaw on February 13, 1907, she received the name Catherine Sarah; it was in this same church on May 28, 1916 that she was confirmed by the first resident Bishop of Grand Rapids, the saintly Bishop H. J. Richter.

The first three years of her education were at a public school in Shields on the outskirts of Saginaw. At that time her father was the proprietor of a hotel, and the parents—seeing their children grow up— thought it best to move into the city where the children could attend a Catholic school. So for the remainder of her grade school education and high school, Catherine attended SS. Peter and Paul where she was taught by our Sisters.

About two years prior to her high school graduation in 1925, Catherine felt a call to the religious life, which strengthened as the years went on. At first her parents did not consent as they thought it was only a passing fancy, but when they saw the eagerness of her desire, they readily agreed and aided her in every way possible to prepare for her entrance. Since her father had become a convert at the time of his marriage, Catherine marveled at the readiness of his consent; her mother, too, was most eager to see her daughter happy.

She did not however enter immediately after graduation. For a year she worked as cashier at a local theater intending to enter the convent in September 1926. Then she was asked to teach with our Sisters at St. Norbert, Munger for four months. Her entrance into the novitiate was on February 2, 1927 where Sister Jerome Smithers was both her postulant and novice mistress. On August 23, 1927 she was clothed in St. Dominic’s white habit, and given the name of Sister Frances Mary of St. Joseph. Two years later on August 29, 1929 she made her First Profession of Vows to Mother Eveline Mackey.

Recalling her Reception of the Habit was always memorable for Sister Frances Mary as during the retreat in preparation for the “big” day, she received her first big cross—her dear mother had a stroke and was not expected to recover. Her confidence in God was so great she knew God would keep her mother for her until she received the habit so that her mother might see her wearing it. Her father, who came for her Reception, also trusted that God would keep her alive until Sister could return home with him. Her mother lived until December!

For forty-five years Sister Frances Mary’s apostolate was that of an elementary teacher. During most of her years in education, it was her privilege to prepare the little ones for their First Holy Communion. She was a very fine teacher who treated each child as an individual; her’s was the ability to challenge each child’s creativity and develop their responsibility. All of Sister Frances Mary’s years in the classroom were happy ones for herself and for her students.

On three different occasions her mission assignments took her to St. John, Essexville where she was to spend a total of twenty years – nine in the teaching field and eleven in food service. Initially there was no plan for Sister Frances Mary to leave the teaching field, but it so happened that she was one of two fourth grade teachers in 1974; only one was needed! She graciously let the lay teacher continue. Since the Sisters were in need of a Food Service Director, Sister Frances Mary opted for the job although she had limited experience for this position. Nevertheless, she soon excelled as a connoisseur! In the course of the eleven years, as the number of Sisters assigned to the convent decreased, her duties continued to increase until she was literally “jack-of-all-trades.” Not only did she prepare three well-balanced meals for the Sisters but substituted in school, spent one day a week in the library, visited the elderly, brought Holy Communion to them and to the Bay Medical Facility residents, trained the sixty Altar Boys, represented the Sisters on the Parish Council, was a member of the Building Committee for the new church, was a Eucharistic Minister in the parish and a member of the Worship Committee, and replaced the secretary at the rectory on occasion! Is it any wonder that Essexville esteems her so highly and is so fond of her?

In 1985 Sister Frances Mary came to Marywood where her life was one of a bit slower pace. She was able to have more time for prayer and assisted with the many tasks that are ever waiting for loving hearts and willing hands.

Community and prayer life were very important to Sister Frances Mary, and she was ever so grateful to God for her life as a Dominican. At the time of her Diamond Jubilee in 1987 she wrote, “I am grateful to God, my community, and my family for their help and support, and also for the countless blessings that have been bestowed on me throughout these sixty years.”

We, too, are grateful that Sister Frances Mary came to us on that February day 70 years ago, and we ask God to bless her life and her generous labors for all God’s people. As she now fully knows and experiences the triumph of Christ’s redeeming love and resurrection, may she repeat her favorite Scripture passage for the last time, “Here I am, Lord! I come to do your will” (1 Samuel 3).

Sister Frances Mary is survived by her brother-in-law, Joseph McIntyre of Saginaw; nephews, nieces, and many friends.

We commend Sister Frances Mary to your prayers.