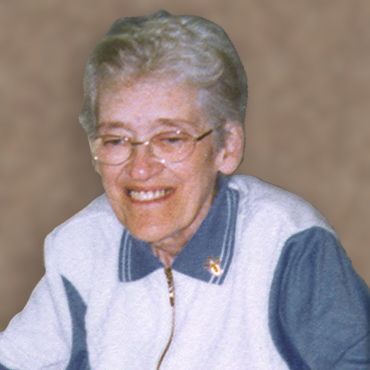 By nature Sister Eunice had a lifelong struggle coping with stress, but wise woman that she was, she chose for her favorite prayer and saying, “Lord, help me to remember that nothing is going to happen to me today that You and I together can’t handle.” And, how beautifully the Lord heard her prayer as she coped with her difficulty and ever remained the gentle and approachable Dominican woman.

It was in Grand Rapids on November 8, 1928 that Sister Eunice became the third oldest of a family of three girls and one boy born to James Rodger and Eunice Frances (Peck) Cronin. Her dear parents became converts to the Catholic faith in 1931 and that same year Sister Eunice was baptized at St. Alphonsus; the parish to which the family belonged and from which she entered our Community. At her Baptism she was officially registered by the name of Margie Lou. At age seven she received her First Holy Communion and on October 26, 1942 Bishop Joseph Plagens administered the sacrament of Confirmation.

Margie was happy and proud to have attended St. Alphonsus Elementary School where she was taught by our Sisters. After the completion of her grade school she attended Girls’ Catholic Central where again she was taught by our Sisters. She derived much pleasure from helping them after class hours. During high school she was able to work part-time at St. Mary’s Hospital.

The thought of becoming a Sister occurred to Margie at the time of her Confirmation. A vocation talk by Father Charles Wilson, OP while in high school helped her come to a decision regarding her future, which she did during her junior year in high school.

She became a postulant at Marywood after graduating from high school. Her entrance date was September 8, 1947. As a postulant, Sister Leonora Gallagher was her Directress. Sister Frances Ann Tatreau was in charge of the novices her first six months until Sister Gerald Grace was appointed to that position. On March 11, 1948 she received St. Dominic’s white habit and the name of Sister Eunice of St. Alphonsus. Mother Euphrasia Sullivan was the Mother General. After being a novice for only one year Sister Eunice made her First Profession of Vows to Mother Victor Flannery March 15, 1949. Her Final Vows were made on August 15, 1952.

In September 1949 Sister Eunice began her educational apostolate of thirty years of teaching in the primary grades. She was a very successful, dedicated and conscientious teacher and her interest extended far beyond the academic. Her rapport with her students and their parents was excellent. Sister left nothing undone to make learning a pleasure both by the classroom atmosphere and the rich curriculum, which she provided. Sister’s mission assignments were to the following places in Michigan: St. Anne, Alpena; Sacred Heart, Muskegon Heights; and St. Stephen and St. Alphonsus, Grand Rapids. Twelve of her thirty teaching years were spent at Santa Cruz, New Mexico. How she enjoyed the rich culture of the Southwest. However, her students who spoke chiefly the Spanish language were a challenge to Sister Eunice. She herself had real learning experiences familiarizing herself with the rich Spanish culture and customs. Infant Confirmation, as it was practiced at the time, was a wonder to her, especially when Archbishop Byrne confirmed 400 “howling” infants at one ceremony!

After her thirty years in a classroom Sister Eunice used another of her many talents and for four years directed Occupational Therapy at Aquinata Hall. From 1983 until 1989 Sister Eunice became the Dietary Assistant at Marywood. Here varied activities were hers and she was much appreciated by Sister Dominica Nellett, who was then the Food Service Director. Since then she has devoted her time to various interests and activities such as: the Retired Senior Volunteer Program (R.S.V.P.), the Marywood hostess team and as a volunteer at Kent Community Hospital (as she had frequently been a Saturday and summer volunteer at Villa Elizabeth). Since her dear mother was a patient for a number of years at Villa Elizabeth, Sister Eunice was always eager to be of any help with activities at the Villa.

Sister Eunice as a teacher had the reputation of always planning her work way ahead. When the Christmas season was over she started planning for Easter! Always a hard worker she was eager to be of help to everyone. She especially was helpful to teachers who had slow learners. Somehow she knew how to motivate them and bring them up to par.

She herself enjoyed arts, crafts, crocheting, and painting. She never lost her great love for music. During her grade and high school years she mastered six different musical instruments and enjoyed playing in the band.

While exploring crafts for herself as an Aquinata resident she often organized programs and possibilities for others. The photographs of a smiling proud Sister Eunice with children from the Grandville Arts Academy holding their creations bear witness to her joy in sharing her abilities. Sister Eunice liked to share that she was one-fourth of each of the following nationalities: Irish, German, French, and English. But, perhaps, she was a bit partial to the Irish in her!

As a Dominican Sister Eunice prayed the Liturgy of the Hours and finally on Wednesday, February 1 she received the reply to a question she had prayed frequently: “When will I come to the end of my pilgrimage and enter the presence of God?” Her pilgrimage has now ended and she has attained her goal – eternal life with God and all the blessed. Surely all her good works and loving service awaited their eternal reward. Here the words from Isaiah are so appropriate, “Here is my servant whom I uphold, my chosen one with whom I am pleased” (42:1).

Sister Eunice is survived by her brother Rodger (Diane) of Grand Rapids; nieces, nephews, many friends and a loving Community.

Entered eternal life on February 1, 2006 at the age of 77 after 57 years of religious life

We commend Sister Eunice to your prayers

Sister Eunice in the snow as a second grade teacher

Giving a buddy a ride on her walker