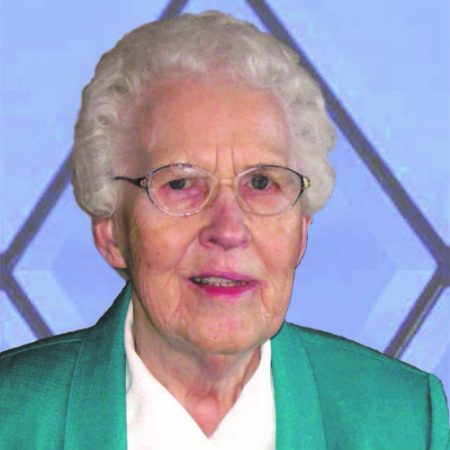 Sister Emeliana responded to this call with her whole heart from her first teaching assignments in small parish schools in Michigan and New Mexico to the land of her ancestors in Lithuania some fifty years later.

Ugonna Josephine Judis was born July 30, 1918 in Irons, Michigan, the third of twelve children of Dominick and Casimira Judis, and one of three daughters to join the Dominican Sisters ~ Grand Rapids. She enjoyed life on the farm yet kept thinking there must be more. She learned about the “more” from Dominican Sisters who gave religious instruction in the parish. Her grade school education was in the public school. When a brother and sister were confirmed at Custer, Ugonna inquired of Sister Emmerica what she must do to become a Sister. Soon she received a letter from Sister Jerome, the novice mistress. Along with her older sister Emily, who became Sister Donata, she entered the Aspirancy at Marywood as a freshman in high school in 1934. That same year her brother Walter went to St. Joseph Seminary. A younger sister, Helen was to follow her to Marywood.

After graduating from Marywood Academy she entered as a postulant on September 8, 1938 and in August, 1939 received the habit and the name of Emeliana. After a year of preparation, she began life on the missions. Her first assignment was to St. Joseph, Wright, but after a few weeks she was transferred to Sacred Heart, Merrill, where she remained five years. She spent thirty-five years in elementary education, serving at St. Joseph, Weare; St. Francis, Ranchos de Taos, New Mexico; St. Mary, Lake Leelanau; St. Michael, Suttons Bay; St. Mary, Charlevoix; Sacred Heart and St. Casimir, Saginaw; Immaculate Heart, Grand Rapids; and St. James, Beaver Island. Sister Emeliana kept a list of students she taught – over 900!

During these years Sister Emeliana earned a BA and an MA in Religious Education from Aquinas College; and a master’s in Reading/Language Arts from Michigan State University. She also studied at St. Joseph’s College on the Rio Grande and at the Franciscan College of Steubenville, Ohio.

Between 1975 and 1989 Sister Emeliana turned to parish work, first in religious education in Weare and Hart and later at St. Anthony, Saginaw; then as a pastoral minister at SS. Peter and Paul, Ionia and Guardian Angels, Manistee. While in Ionia, she was elected vice president and then president of the Ionia Ministerial Association, which promoted ecumenism and coordinated efforts to help people in need.

In 1989, the year of her golden jubilee, Sister Emeliana retired from parish work and with Sisters Eileen Popp and Karen Thoreson began a new ministry, the Prayer and Listening Line, through which “hurting people” could call for support. This ministry was interrupted when she returned to pastoral work in her home parish, St. Bernard, Irons, where her brother, Fr. Walter Jude, was then pastor. In the fall of 1993 she had a sabbatical at Berakah in Pittsfield, New Hampshire.

Then in 1994 came the fulfillment of a recurring dream. In this dream Sister Emeliana was in a procession carrying the banner of Jesus crowned with thorns, which she associated with Lithuania, the land of her parents’ birth. The United States Conference of Catholic Bishops was looking for missionaries to assist Catholics in Eastern Europe after the fall of the Iron Curtain. Sister Emeliana was among the first volunteers and spent two months in the land of her ancestors. She traveled from city to city bringing the good news that Jesus is merciful and forgiving and knows and loves them to people who had survived wars, oppression, exile to hard labor in Siberia, persecution, famine, and homelessness. She visited schools to observe catechists and spoke to teachers about methods and skills for teaching the Gospel. She wrote, “My general thrust was to get the children to know Jesus and how to live as baptized Christians.”

From her own relatives she learned the horrors of life behind the Iron Curtain but also the devotion to Mary shown when, armed only with prayers and hymns, the people turned the Communists away from the capital city, Vilnius. By 1994 the Communist regime was over, but the people had to overcome decades of fear and mistrust, reconstruct churches, and struggle with poverty and unemployment. In 1996, Sister Emeliana returned for a second mission in Lithuania. Later ministry again on the Prayer and Listening Line brought great fulfillment.

At the time of her retirement from pastoral ministry, Sister Emeliana said, “Life keeps getting better and better. I have loved everything I’ve done.” Gentle, smiling, enthusiastic, dedicated, she gave herself fully to others. She had a special affinity for nature in all its beauty; she knew the names and songs of the birds and observed every lovely flower with admiration. Her hobbies and interests included hiking, swimming, sewing, crafts, stone painting, and visiting the elderly. Deeply prayerful, she treasured the experience of a month at the Benedictine charismatic monastery in Pecos, New Mexico, and became a core member of a group for prayer meetings at Marywood.

Through many years of prayer, of teaching, living and loving, Sister Emeliana never wavered in her strong faith in a loving God. May she now be welcomed into eternity to join the communion of saints and all whom she loved while on Earth.

Sister Emeliana is survived by her sister, Sister Helen Jude, OP of Grand Rapids and her brother Jacob “Frank” Judis of Irons; nieces, nephews; many friends and members of her Dominican Community.

We commend Sister Emeliana to your prayers.