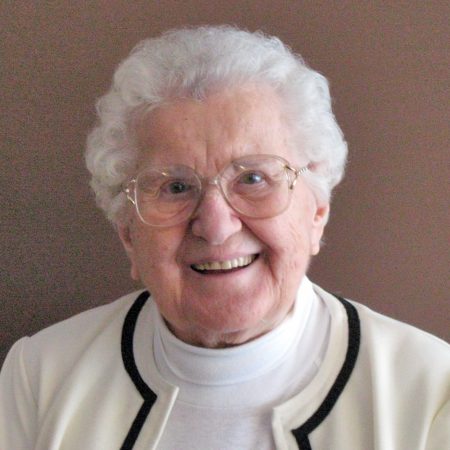 Reflecting on Sister Elizabeth’s long and meaningful life, it is easy to see why Psalm 139:13-14 appealed to her. The lines, “Truly you have formed my inmost being; you knit me in my mother’s womb. I give you thanks that I am fearfully, wonderfully made,” are so very appropriate for her. From her life’s beginning, God’s guiding hand was evident.

On Ash Wednesday, March 31, 1915, in Grayson, Saskatchewan, Canada, Elizabeth became the fourth child born to John and Juliana Kulcsar Barilla. There were eleven children in the Barilla family – eight girls and three boys. She was baptized on May 2, 1915, receiving the name Elizabeth after the great Hungarian saint. Elizabeth’s parents were both from Hungary and their indomitable faith was the foundation of their Christian home. Five of their children became vowed religious – three Grand Rapids Dominicans and two Sisters of Social Service. Elizabeth made her first communion when she was eight years old, and from that day she reports that her great love of the Blessed Sacrament grew. She was confirmed on June 9, 1929.

At age seven her education began at St. Antal School near her home. About her next educational venture Elizabeth wrote, “I met the Dominican Sisters in Melville during my high school years. I had been thinking about being a nun for some time, and when I saw my first Dominican I thought, ‘That’s what I want to be.’ We had a picture of St. Dominic in our house with the star above his head. That picture always attracted me. I knew the story of St. Margaret of Hungary, a Dominican saint. And now I met a real live Dominican! It didn’t take me long to make up my mind.”

Elizabeth loved her home and life on the wide-open prairie spaces of Saskatchewan. Along with her brother and uncle who were close to her in age she loved to ride, shoot, trap and herd cattle. She had no trouble keeping up with the boys, yet in the home she could be a quiet, demure child. Among the many bonds that united the Barilla family, a very important one was music. At one time the family had an orchestra and choir. Elizabeth sang and played the organ in church as well as several musical instruments. When it was clear that God wanted her to go far away to enter the convent, her response was wholehearted and positive. About this time, she wrote, “On February 5, 1931, I left the dearest, happiest spot on Earth, my home.” She arrived at Marywood on February 9, 1931 and entered the aspirancy.

Graduating from Marywood Academy in 1933, she entered the postulancy on September 8, 1933. At her reception on August 21, 1934 she received the name Sister John Evangelist of the Divine Heart, a name by which she was known until 1969 when she resumed her baptismal name. She made her first profession on August 24, 1936, and final profession on August 24, 1939. Sister received a Bachelor’s degree from Aquinas College in 1960 and a Master’s degree from Aquinas Institute of Religious Education in 1967.

Always a teacher at heart, Sister Elizabeth’s ministries fell into several categories: Catholic school education from 1936-1969 where her teaching was primarily on the upper elementary and junior high levels; and religious education and pastoral ministry from 1969-91. In 1980 Sister traveled to Esterhazy, Saskatchewan to care for her aging father. After his death one year later, she stayed for six years to coordinate religious education in the local parish.

Both Barilla sisters, Elizabeth and Juliana, were fluent in the Hungarian language as their parents had insisted they maintain that language at home. This was a great benefit when the two sisters travelled to Hungary in 1994 – 1996 under the auspices of the U.S. Conference of Catholic Bishops to assist the people in updating their understanding of the Church since Vatican II. All religion had been suppressed in this region of the world from the end of World War II until the fall of the Iron Curtain in 1991.

In her retirement years, Sister Elizabeth was an active member of the ministry of the Prayer and Listening Line at Marywood. At the same time, she was an advisor for the Dominican Laity and the spiritual advisor for the Friends of the Cross. In 2006 Elizabeth began ministering to incarcerated men at the Muskegon Correctional Facility. She was 93 years old when she began this ministry, which she continued until mobility issues made it impossible to travel in 2008.

In a reflection written in her later years, Sister Elizabeth wrote: “I praise and thank God for His great mercies. I also thank my dear Dominican Sisters for all they have done for me and in any way have helped me get nearer the eternal shores.”

Another favorite prayer of Sr. Elizabeth’s was Psalm 91 which concludes with the verse: “With length of days I will satisfy her and fill her with my saving power.” At this time too, she mentions that her favorite flower is the rose, particularly the wild prairie rose. And so, it has come to pass that this good woman of many days, of 103 years has been filled with God’s saving power and returns now to her loving God who reaches out with deep affection to this ever-faithful prairie rose.

Sister Elizabeth is survived by her sister, Margaret (Stan) Petracek, Esterhazy, Saskatchewan; nieces and nephews, many friends and members of her Dominican community.

We commend Sister Elizabeth to your prayers.

Pray for peace in the world

Sisters Juliana and Elizabeth (first and third from the left) along with their siblings and parents at a family gathering in Canada. Their younger sister, Ann Mary (Sister Stephen†, fifth from the right) joined the Grand Rapids Dominicans as well. Centenarians both, Sisters Elizabeth and Juliana enjoy sharing stories about their life experiences growing up in Canada and serving as Dominican Sisters of Grand Rapids.

In 2006 Elizabeth began ministering to incarcerated men at the Muskegon Correctional Facility. She was 93 years old when she began this ministry, which she continued until 2008.