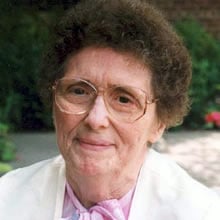 Well could Sister Eileen Marie concur with the author of Colossians when he stated, “In my own body I do what I can to make up all that has still to be undergone by Christ for the sake of His body, the Church.” (1:24)

God alone knows all the mental and physical suffering Sister Eileen Marie endured for most of the years of her religious life. And now a special participation in the Triumph of the Cross and a sharing in the glories of Christ’s glorious Resurrection is hers.

It was in Buena Vista Township in Saginaw County that Sister Eileen Marie’s life began on October 13, 1926 when she became the first child born to William and Anna Webber Prueter. She was baptized at Sacred Heart Church, Saginaw on October 17, 1926, and given the name of Geraldine Ann. About two years later a baby brother was born. The child lived for only an hour or two, but long enough for the convert father to baptize him. Another brother and two sisters born later completed the Prueter household – a home replete with much love – a love and concern that extended to others outside the home.

When Geraldine was about five years old, a fire destroyed their home, and they moved into the City of Saginaw. This made possible a Catholic education for Geraldine. She was too young, however, for acceptance into grade one at Sacred Heart School, so with the Pastor’s approval, she attended Lincoln School. Grades two to eight were at Sacred Heart School, and she recalled with great joy her First Holy Communion as a second grader. In grade seven, in 1938, she was confirmed by Saginaw’s new bishop, Bishop William Murphy, who had just been appointed to the newly established Diocese of Saginaw.

Since Sacred Heart had no high school at the time, Geraldine attended St. Mary Cathedral High School. At both Sacred Heart and St. Mary she had our Sisters for teachers, and from the time she was very young, she had aspirations of joining them. Sister Clementia Hagens, her teacher at Sacred Heart, was a great help to her, and while in the grades she had the privilege of attending two Reception ceremonies at Marywood. These made a tremendous impression on her, and she knew she wanted to be a Grand Rapids Dominican. In 1942, she entered the Marywood Aspirancy for grades eleven and twelve. Here she found herself with five other lovely girls. These were very happy years.

Her parents supported her decision to become a Religious, and on the Feast of the Nativity of Mary, September 8, 1944, she entered our Congregation as a Postulant. Sister Leonora Gallagher was her Postulant Mistress and Sister Frances Ann, her Novice Mistress. On March 13, 1945, she received the white habit of St. Dominic and became known as Sister Eileen Marie of Our Lady of Confidence (a devotion very popular at that time in our Congregation). On March 14, 1946, she made her First Profession of Vows to Mother Euphrasia Sullivan. She made her Final Profession on August 15, 1949 to Mother Victor Flannery.

After her educational preparation, Sister Eileen Marie began her teaching profession. For twenty-eight years her ministry was teaching children at the middle elementary level. Later she also did a year of tutoring. For two years she assisted in the Aquinas College Library, and for over six years she did Pastoral Ministry at Holy Family Parish in Saginaw.

Sister’s teaching apostolate took her to schools both in Michigan and New Mexico. She served in several places in Michigan, among them: West Branch; St. Joseph, Saginaw; St. Anne, Alpena; St. Thomas, Grand Rapids; Our Lady of Grace, Dearborn Heights; Chesaning; and Gaylord. In New Mexico she taught at Belen, Santa Cruz, and Penasco.

Sister Eileen Marie was a most conscientious teacher. In a recent autobiographical sketch she wrote, “Teaching has been very important to me. I’ve tried to offer a loving understanding of students, and teach them the regular subjects. I’ve found myself attracted most to those struggling with learning and behavior. At times, I succeeded in helping them. Often I didn’t stay long enough to find out! That was a hard part of my life — moving frequently.” The same conscientiousness that characterized her teaching was evident in all that she did. The recipients of her Pastoral Ministry at Holy Family, Saginaw were many and she derived much joy and satisfaction from responding to the needs of the children.

In 1985 Sister Eileen Marie came to Marywood with frequent “visits” to Aquinata Hall. By this time, her multiple sclerosis had worsened. With the help of leg braces, a cane, a walker, and her “Amigo,” she courageously remained active. In 1987, her desire to be in the mission field prompted her to work in religious education in Espanola, New Mexico. This proved too much, however, and after a half-year there, she returned to Marywood. Her apostolates at Marywood were varied, but perhaps two of her greatest tasks performed for the common good were her ever-so-welcome letters to the Sisters on the missions and her calls to the missions to inform the Sisters of the death of a member. Then, too, she was ever faithful to common prayer.

She had a great pride in our Dominican life and heritage, and she had many hobbies and interests; among them were crocheting, needlecrafts, music, natural beauty, mountains, lakes and farming areas. Above all, she loved people and in her heart she always retained a special love for the people of New Mexico and the Southwest.

One of Sister Eileen Marie’s favorite scripture quotes was from Micah: “This is what Yahweh asks of you, only this: That you act justly, that you love tenderly, and that you walk humbly with your God.” (6:8) In her life of suffering, trials, discomforts, and dependence on others, her opportunities and challenges to live this to the full were unending. Now that the good God has called her HOME, may she exclaim with St. Paul, “I consider the sufferings of the present to be as nothing compared with the glory to be revealed to us.” (Romans 9:18) May Sister Eileen Marie rest in God’s eternal peace, love, joy, and beauty!

We commend Sister Eileen Marie to your prayers.