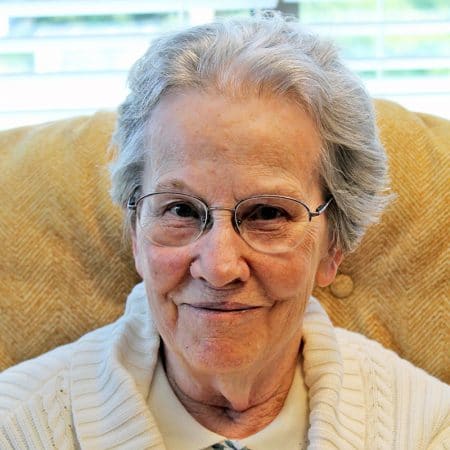 The third of four children born to Peter and Edith (Thome) Brown, Audrey was welcomed into the family on September 23, 1932, in Grand Rapids, Michigan. The young family soon moved from Grand Rapids to Alpine where Audrey began first grade in a one-room public school. In second grade, she attended Holy Trinity School where she met Dominican Sisters.

From that time on she wanted to be both a teacher and a Sister. She loved school and had a deep sense of calling to religious life which was nourished by her transfer to Marywood Academy as an Aspirant for her junior and senior years. In the summer between those two years, she worked as a nurse’s aide at St. Mary’s Hospital where she became acutely aware of the suffering and the needs of others. Graduating in 1950, Audrey returned to Marywood as a postulant in September, where her older sibling, Sister Phyllis was already a professed member. Audrey was received as a novice in May and given the name Sister Donna of the Holy Trinity, which she kept for the rest of her life.

When she was in her last year of high school at Marywood Academy, the directress of aspirants used the words “dependable and kind” to describe her. Those two attributes never changed throughout her long life of service and community.

Following her graduation from Marywood Academy, Sister Donna attended Aquinas College earning a BA degree. She received an MA in Elementary Administration and Supervision from Western Michigan University in the following years. An impressive collection of certificates and awards attests to her ongoing educational endeavors.

Sister Donna’s talents were numerous as she taught in the elementary grades as well as math, science, Latin and religion in high school. She also served as principal in some of her assignments. After her years as a high school teacher and teaching principal, she said: “Finally I went down the up staircase and returned to teaching elementary classes.” In her own words, “You name it, we did it.” And this is true, from her earliest years, Sister Donna was one of those people who saw a need and filled it without question or hesitation.

In 1985 Sister Donna began a new phase in life – that of pastoral ministry with an initial assignment at St. John Vianney parish in Wyoming, Michigan. In 1999 Sister Donna began a sabbatical year with a course in Clinical Pastoral Education (CPE) leading to certification in this area. This training served her well in her subsequent roles as Pastoral Associate at Holy Trinity Parish, Comstock Park; St. Mary of the Woods, Twin Lake; and St. Charles Parish, Greenville.

Throughout her lengthy career as teacher and advocate, Sister Donna served as an ally for those seeking an annulment, an educator in the Rite of Initiation for Adults program, a leader in the Stephen Ministry, and facilitator for the program Rainbow for all God’s Children which is specifically aimed at assisting children who are grieving significant loss.

Her philosophy of education (and life) is summarized in her own down-to-earth words: “I think each one of us is important. I think God created us with a special purpose. If I don’t accommodate that purpose, then it’s not going to be done. And I would want our students to learn respect for one another and for the broader world. For instance, if we’re so concerned with our own, taking care of ourselves, which I call ‘in-love,’ without reaching out to others, or ‘out-love,’ then we get too smothered.”

In serving others, Sr. Donna found meaning and purpose. When she retired from active ministry, she relished the opportunity to volunteer at the Michigan Veterans Home in Grand Rapids. She felt honored to be a listening ear and caring presence for those who served their country, as had members of her own family. This she did until her health made that service no longer feasible.

Her friends and classmates remember her fondly as gentle, kind, grateful, confident, and dependable. She was known as one who loved her work, always had a ready laugh and a willingness to help. In every fiber of her being, throughout her long life as a faithful Dominican, Sister Donna lived up to those two words used to describe her when she was but 17 years old: “dependable and kind.”

Sister Donna will be missed by family, friends, and former students who are all better people for having known this kind and dependable daughter of St. Dominic.

We commend Sister Donna to your prayers.

Pray for Sisters and family members with dementia and their caregivers

Sister Donna Brown ministered to veterans at the Grand Rapids Home for Veterans for a number of years.

Sister Donna responds to a catechumen as he talks of his eagerness to embrace the Catholic Faith.

Sr. Donna is always happy to help decorate lunch bags for Kids Food Basket or put together dolls that are donated to children through Bethany Christian Services. 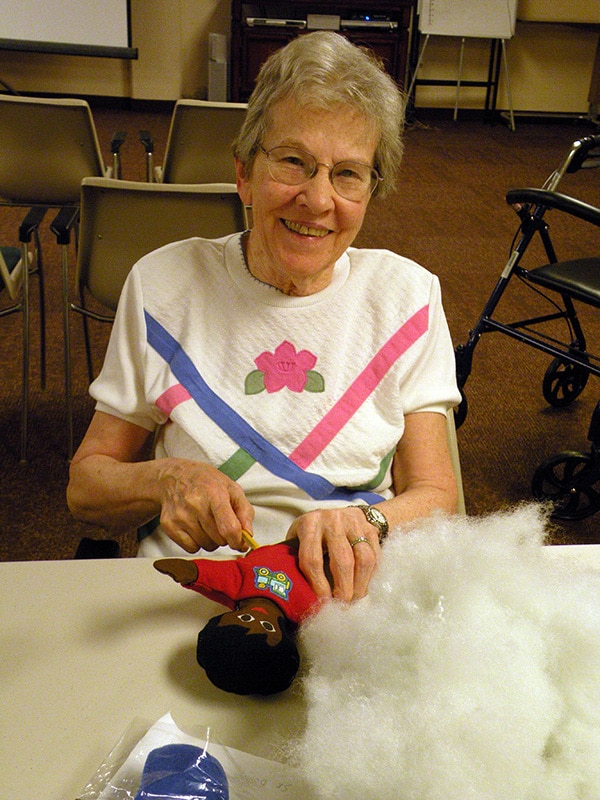 Sr. Donna Brown’s eight-year ministry (1977-1985) expanding programs and building enrollment at Sacred Heart Academy in Merrill, Mich, included such highlights as the Prayer Partner Program. “Each student is assigned another person, whom they include in their prayers; special friendships have grown out of this program.”