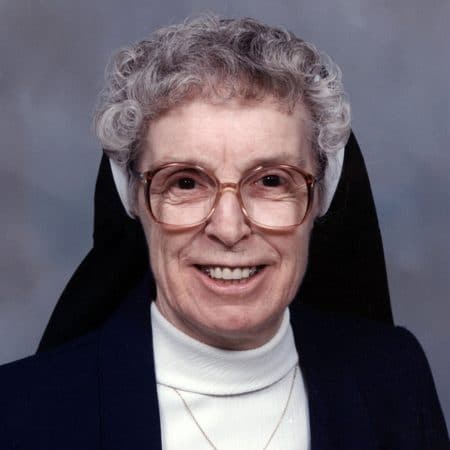 “You did not choose me, no I chose you; and I commissioned you to go out and to bear fruit, fruit that will last.”

Sister Diana Mlynarchek gave this verse as her favorite Scripture passage on the occasion of her Silver Jubilee. And it is a fitting choice for one who spent many years commissioned to go out to numerous missions and to bear much fruit in the classrooms where she taught.

Mildred Mlynarchek was born August 14, 1921 on a farm in the Gun Lake area near Wayland, Michigan. She was the 7th child in a family of 13 children born to Andrew and Anna Krzsak Mlynarchek, who were immigrants from Czechoslovakia. They married in Chicago before moving to the rural area of West Michigan. Although Mass was celebrated there only once a month and there was no Catholic school, Dominican Sisters taught religion in the parish in the summer months. Diana’s grade school education was in Robin School (no longer in existence). She began secondary education at Wayland Union High School, but left in her junior year to work at Cole’s Laundry in Grand Rapids where she labored for six years.

In the city, she was glad to be able to attend Mass regularly, to make retreats, and to talk on religious topics with another girl who worked in the laundry. But she reports that she had little interior peace or contentment. Her pastor at SS. Cyril and Methodius parish told her that she had a religious vocation, but she was timid about following his advice. Finally, her friend at the laundry entered the convent and Mildred took the step to do the same. Ironically, the friend who interested her in the convent left after a few months, but Mildred never looked backed. She had found her home for a lifetime. Her parents, who had objected at first, soon were happy about her vocation to religious life.

At reception in September 1945, she was given the name of Sister Mary Diana of St. Dominic. During her novitiate year the Marywood community received the privilege of daily exposition of the Blessed Sacrament and Sister Diana found great delight and consolation in this devotional practice. After profession she completed her education at Marywood and began work toward her bachelor’s degree from Aquinas College. Later she studied at Central Michigan, Loyola, and Eastern Michigan universities.

In 1987 Sister Diana served as office assistant at Marywood Academy while residing at St. Thomas convent. Two years later she became bursar at Aquinata Hall and engaged in outreach ministries, including visits to shut-ins of St. Thomas parish. As bursar she was both careful of community resources and generous in providing for the needs of the Sisters.

Sister Diana was prayerful, hard-working and conscientious. She was known to “give it her all” whenever she was faced with a task, assignment or chore. She maintained close ties with her family and often looked after her two bachelor brothers during the summer months. Before she left for the fall semester, their pantry was well stocked with preserved fruits and vegetables of every kind. In fact, preserving foods through the practical art of canning was something for which Sr. Diana was known. Many of her housemates have fond memories of late summer/early autumn canning “bees” and the subsequent enjoyment of fruits and vegetables throughout the winter months. Her hobbies and interests included reading, swimming, sports, and gardening. Her flower plot at Marywood was top-notch, as was the raisin bread she baked. She was even known to convert window wells into cold storage areas for wintered-over root vegetables.

In later years Sister Diana suffered from loss of hearing and other illnesses. Twice she was disappointed at having to cancel her participation in the Parable Pilgrimage to the Lands of Dominic. In 1998 however, she received the opportunity to go on a tour of Canadian shrines. This journey remained a delightful memory for her.

Having worked mightily and faithfully in her commission to go out and bear much fruit, Sister Diana entered her final journey and gained eternal rest on July 3, 2012 surrounded by her Sisters and friends.

We commend Sister Diana to your prayers.

Sister Diana in her teaching ministry