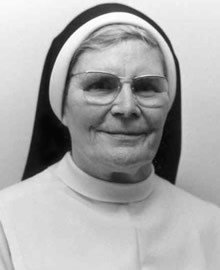 God’s call to eternal life came to Sister Columba on Thursday, September 5, 1991, when she died gently and peacefully after many years of patient and cheerful suffering. Sister Columba had generously answered God’s call to leave her beloved country of Ireland and came to America to join the Grand Rapids Dominicans. Now her faithful life of service and suffering are in God’s hands.

Sister Columba was born to Michael J. and Catherine Dillon in Dublin, Ireland on June 30, 1907. On July 8, 1907, she was baptized in the Pro-Cathedral in Dublin and was given the name of Veronica Mary. Veronica lost her parents at an early age, and she had little knowledge of her family. She did know that her father was an engineer by profession. Religious Sisters and kind friends provided for Veronica in her youthful years, and her education was in public schools that were taught by Catholic teachers. On June 8, 191 8, she was confirmed by the Most Rev. Bishop Brophy.

Early in life two things became very important to Veronica. Before all weighty decisions she sought God’s help in prayer, and, secondly, she wanted to be independent so she worked and continued her education by going to night school. In the course of the years she met two groups of Sisters with whom she became very close: the Mercy Sisters and the St. John of God Community of Sisters. Both of these communities invited her to join them. However, long before this, the thought of becoming a Sister had occurred to Veronica. She had watched a Sister at prayer before the Tabernacle, and this was a real inspiration to her and filled her with a desire to become a religious. As she became older, the life of a Missionary had a strong attraction for Veronica.

When she was twenty-one years old and working in a hospital, she went to the Chapel to make a Holy Hour to seek Divine help to discern her future. She confided this to Sister Barbara, RSM, her friend at the hospital, and she also told her she did not think she was being called to her community. Sister Barbara then shared with her that at the time she was in the front of the Chapel praying, two Sisters from America were in the Chapel also, and that they had left their address.

An appointment was arranged with the two Sisters who were our own Sisters Coletta Baumeister and Edith Welzel who were in Europe in the interest of vocations to the Grand Rapids Dominicans. Sister Columba liked to tell that it wasn’t the white habit that attracted her to the Dominicans as they were dressed in black!

At twenty-two Veronica set sail for America along with four other Irish candidates. Of those who came at that time only Veronica and Catherine Swift became professed members. Sister Jerome Smithers, the novice mistress at that time, went to New York to meet them. Those in the Novitiate at the time vividly recall the “Irish Tea Party” held on the Marywood roof garden to welcome the Irish newcomers. The date of Veronica’s entrance at Marywood was September 3, 1929.

Veronica was sent out as a postulant to St. Mary Magdalen Convent, Melvindale and that was the beginning of her many years in the Community’s apostolate of “housekeeping”, later to be termed “Food Service Director”. Mother Eveline Mackey, the Prioress General at that time, gave Veronica and the other postulants who were to receive the Holy Habit their retreat. Veronica was clothed in St. Dominic’s white on June 26, 1930, and was given the name of Sister Columba of St. Mary Magdalen. Her Profession of First Vows was on August 30, 1932, and at that time the three Reception classes of 1930 were again united in one class.

Sister Columba spent over fifty years in the active ministry which was to take her to missions both in Michigan and New Mexico. In Michigan her assignments included Melvindale; West Branch; Traverse City; Chesaning; and at Marywood, Immaculate Heart of Mary, St. Joseph, Aquinas Convent, and the House of Studies in Grand Rapids. In New Mexico she served at Santa Cruz, Nazareth Sanatorium, and Penasco. At the places she served in Food Service, she was a marvelous cook and as one annalist stated “Better Homes and Gardens couldn’t have presented a better selection than the meals we have enjoyed.”

Very special years for Sister Columba were her seven years at Marywood in the girls’ dining room when Marywood had large groups of boarders, and her thirteen years at the House of Studies. Her first years at the House of Studies were in the culinary department, but then she was asked to assist with the Health Care needs of the Sisters which consisted largely of taking care of the Sisters’ personal needs. Nothing was ever too much for Sister Columba in giving loving service. Whether it was a tray, a Sister’s personal laundry, or a night vigil, the services were all graciously rendered. Sister Columba down the years loved to surprise the Sisters with a fresh pot of coffee and some goodies to go with it. And if you never tasted her delicious potato doughnuts, you really missed a rare treat. Sister Columba was generosity personified; literally “She would give you the shirt off of her back”, and she herself was always grateful for the least kindness.

Sister Columba was always a hard worker, but nowhere were her labors as untiring as during the many years she had charge of the “post office” at our Marywood festivals. Even when she made her occasional trips to Ireland, she came back laden with many choice treasures for her post office. Numerous were the recreations that found the Sisters on the missions helping Sister Columba ready her packages.

Many were the crosses Sister Columba bore, and, especially so, that of poor health. It seems she was prone to infections and broken bones, and yet through her many illnesses, she could always manage a smile. Sister Columba could well concur with St. Paul, “I have been crucified with Christ, and the life I live now is not my own; Christ is living in me. I still live my human life, but it is a life of faith in the Son of God, who loved me and gave Himself for me” (Gal 2: 19-20).

Prior to January 1984 Sister Columba had ample experiences at Aquinata Hall, but at that time she became a permanent resident since she herself needed some of the health care which she had so graciously given with so much care and joy at the House of Studies. Here her community life and her prayer life, which were always so important to Sister Columba, became even more meaningful.

May Sister Columba, who so many years ago left her beloved Ireland to give her life and service to the Church and her Dominican Community, be given a very special welcome to that dwelling with God and the Blessed where there will be no more sorrow, no more pain, but only peace, joy, and love without end.

Sister Columba is survived by many friends.

Entered eternal life on September 5, 1991 at the age of 84 after 62 years of religious life

We commend Sister Columba to your prayers.