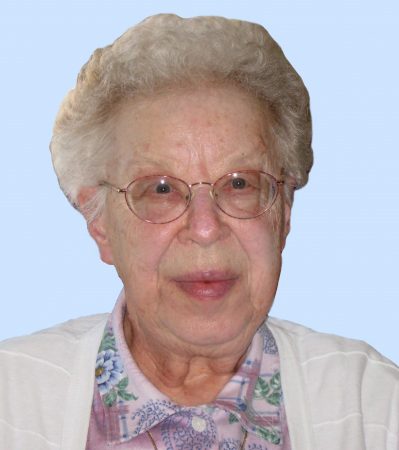 After 50 years of Religious Life in celebration of her Golden Jubilee, Sister Christine Jozwiak wrote: “Each assignment had its challenges, but always God’s grace was there. All I can say is God is so good.”

Helen Jozwiak, born in Gaylord on February 20, 1921, was the second of five children of Valentine and Theresa Cherwinski Jozwiak. Her father’s family immigrated from Poland when he was one year old. As an adult he worked for the railroad and the family enjoyed the advantage of free railroad passes during Helen’s childhood. During the Depression years, the family supplemented their resources through cultivating a home garden. As soon as she was old enough, Helen helped the family by working during the summers for the resort industry and tourist trades in the Gaylord area.

Throughout grade and high school at St. Mary’s, Helen was taught by Grand Rapids Dominicans. She considered joining them and even indicated the desire to attend Marywood Academy as an aspiring candidate at the end of the 10th grade. That desire was postponed when Sister Fabian visited Gaylord and suggested that Helen finish high school at St. Mary’s where she would receive a fine education from the Sisters who fully staffed the school. The desire to enter did not waiver, and so it was that on September 8, 1939, Helen became a postulant. As a novice she became Sister Mary Christine of the Infant Jesus.

Sister Christine’s first teaching assignment was indeed a challenge. At St. Rita’s, Saginaw she had 60 children in grades 1 and 2 – with just enough seats for 54. The country was engaged in World War II and school furniture was not a priority. The much- needed desks arrived the day school closed in June. She spent seven years at St. Rita’s and then went on to Fisherville and Munger. When the school at Prudenville was opened, she was one of three Sisters sent there. She had only 21 children in her class at Our Lady of the Lake in Prudenville, and a young Sister was expected to be equal to more. So the next year she was transferred.

In 1954, Sister Christine traveled to New Mexico for the first of two missions there. The first was from 1954 to1960 and the second was 1972-1982. During the first she taught at Our Lady of Fatima, Albuquerque and then at Penasco, where the challenge was wearing the hats of superior, principal, teacher and hot lunch manager. “It was also a year of inter-community living with the Handmaids of the Precious Blood from Jemez.

Back in Michigan between 1961 and 1971, Sister Christine was principal at Pewamo and next in Tawas City, where the challenge was the fact that two parishes, St. Joseph and Immaculate Heart of Mary, merged two schools into one. Her next assignment was the comparatively peaceful one of fifth grade teacher at Marywood. Then back to New Mexico with service at Santa Cruz and Belen. It was hard for her to leave the Southwest but she felt she should be nearer to her aging parents.

Sister Christine’s academic preparation included a B.A. and an M.A. from Aquinas College. She also had a summer session at St. Joseph College on the Rio Grande in Albuquerque and another at Workshop Way in New Orleans. At Central Michigan University she accumulated 27 hours in administration, stopping short of a degree in order to avoid administrative assignments. “I found out it did not help me as I was principal for 20 years, doing both teaching and administration at the same time.”

In 1982 Sister Christine took the position of administrative assistant at Immaculate Heart of Mary in Grand Rapids. Then for seven years she was Director of Religious Education at Sacred Heart, Merrill. In 1990, the year of her Golden Jubilee, she was granted a sabbatical. She spent her time in Glen Falls, New York at the Wellsprings Program with Sisters and Priests from all over the world. Rejuvenated after the year, she went to St. John Vianney parish in Grand Rapids as part-time secretary in the Religious Education Program. After four years she retired from active duty and moved to Marywood.

Throughout her life, Sister Christine loved to travel; perhaps early forays, courtesy of the free railroad passes from her father’s occupation, ignited that love in her. Her travels took her through the Great Smokies and to several motherhouses of the Dominican family as well as parts of Europe, Canada, Mexico and Hawaii. Those who traveled with her report that she was an excellent companion on the road, always seeing humor in the day-to-day life of those she met along the way. Her friends also mentioned that she enjoyed cooking and was excellent in this art. Other hobbies included reading, crocheting and hiking.

Her love for her family and friends was a sustaining force in her life as she entered her last journey dying peacefully in her sleep at Marywood, the home she loved so well.

Sister Christine is survived by her sister Agatha Noa of Gaylord, MI; nieces and nephews, many friends and members of her Dominican community.

We commend Sister Christine to your prayers.

Sister Christine at Marywood in 1970

Sister Christine as a principle at Holy Cross School in 1972